Modern fonts have to serve three masters, the printed page, the computer screen, and the world wide web.


For the new version (10), I advise watching this video:
https://vimeo.com/172231158
There is a LOT of information there so I advise stopping it and thinking, perhaps experimenting as you follow along.

TTF - True Type Fonts admirably serve the printed page. With gray scaling pixel jags on monitors can be minimized.
OTF - Open Type Fonts allow HINTING for optimum screen utilization.
WOFF - Web Open Font Format is based on the same principles as OpenType and TrueType fonts but have been optimized for use in web pages, and is supported across all recent major browsers.
Fonts that are used in webpages are also called "webfonts".

Introduction to Font Creating with V7.
FontCreator allows you to open any font on your computer whether installed (must be un-installed before changes can be made) or saved in the folder of your choice as a font creator project (.fcp) file. Make whatever changes you want.

From File in the upper left hand corner, select Export, the folder you want, the type of font you desire, Save, and 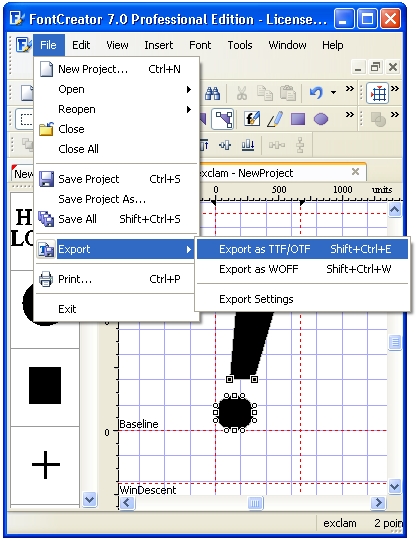 your WOFF or hinted OTF file is created!

To create a new font:
1. Open FontCreator V7, click on File in the upper left hand corner, New Project (Ctrl N), and give it a name. You are given a choice of having punctuation and standard symbols done for you or not. The overview window will appear with background representations of assigned glyphs in the default of Arial. If you want a different overview font, change it at Tools / Options / Overview. 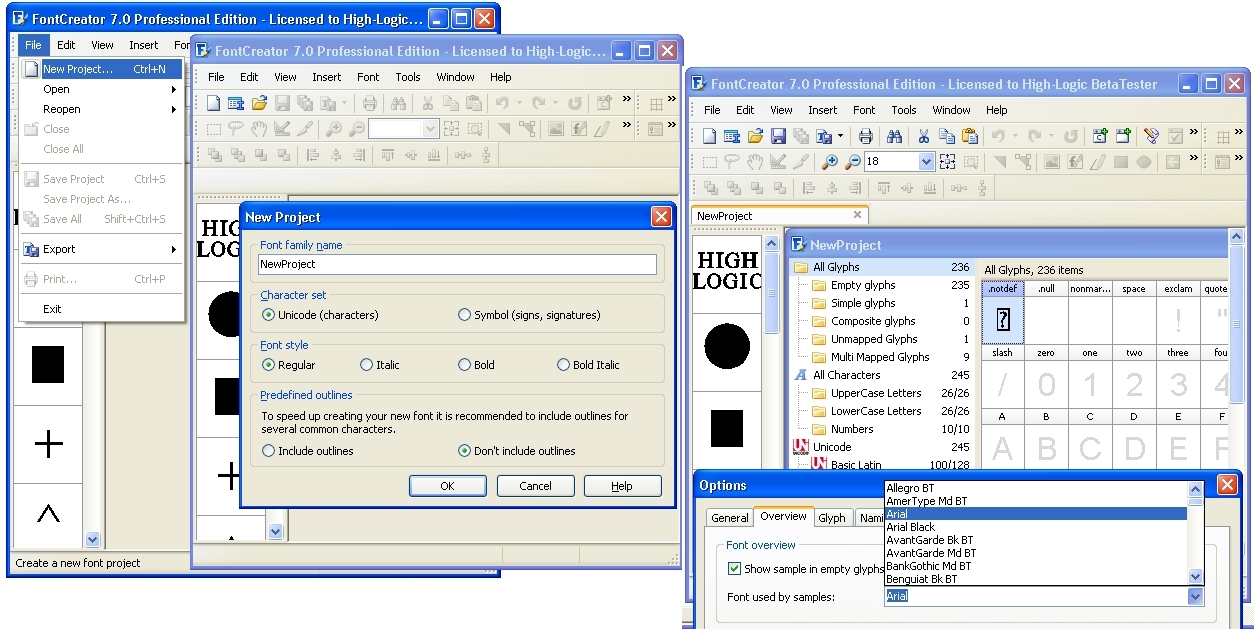 2. From the Overview Window select a glyph. View / Toolbars / Glyph Properties will display the important information about the glyph - empty at this point.
Side Bearings tells the computer where your glyph will begin and end. You can “grab” them and move them wherever you want.
Any part of your glyph extending beyond Win Assent or Win Descent will be clipped off.
All metrics can be changed in Font / Properties / Metrics.
The Bounding box, defined by the Four Extreme On Curve Points, determines the parameters of your glyph which may extend beyond the bearings.

Think of your computer as being a blind person trying to discern your glyph. The software searches for and locates the four extreme on-curve points of the outside contour and identifies them as being the left and right sides, top, and bottom of the glyph. The rectangle they form is known as “The Bounding Box” or b-box. That is the basic structure from which your glyph will be carved by the on and off-curve points you add.

Off Curve points define curved lines but should be kept perpendicular or parallel to On Curve Points and within the Bounding Box.
Off Curve Points not obeying the rules will turn red, indicating Warning Points. 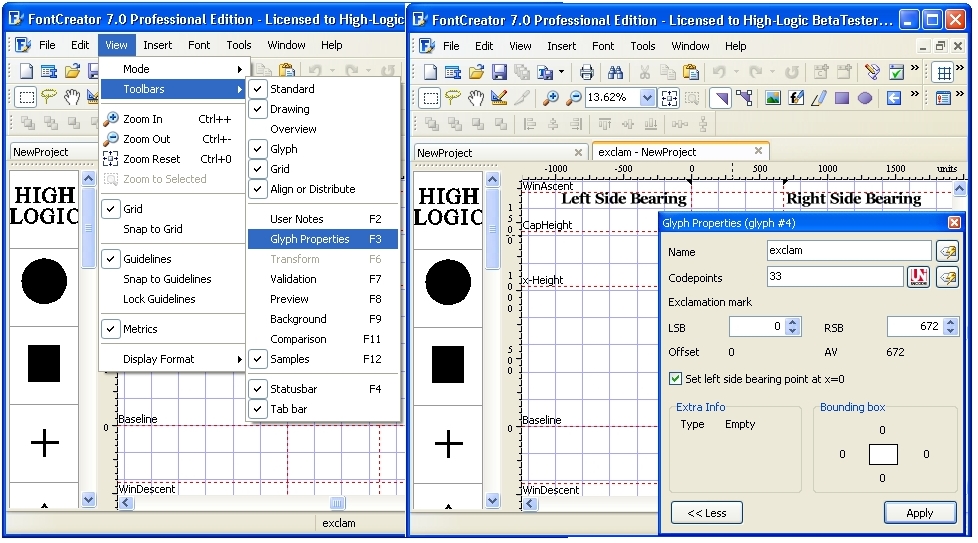 3. There are 4 kinds of glyphs:
a. Control glyphs which are best left alone, the majority thankfully not even shown in FC.
b. Empty glyphs such as #3 Space where you may wish to move the Right Bearing to change the space between words.
c. Simple glyphs composed of closed contours.
d. Composite glyphs, combinations of other glyph shapes from the font.

or drag in a Sample from the left side which can be changed by Tools / Options / General / Samples Toolbar Font.

Whichever method you chose, you will probably want to fine tune the results using Q and W keys to step from point to point or contour to contour, and the arrow keys to move things around.
Points or contours can be captured and moved in groups. Pressing an arrow once moves 10 font units. Arrow + Shift moves 100 f Points, Arrow + Ctrl moves 1 f point.

Pressing the magnifying glass will zoom in to any selected point or group.
The other icon takes you back to full screen.
02-Mag.jpg (1.77 KiB) Viewed 6565 times

A will add a new point, F will convert it to an off-point, N back to an on-point again.
The “squared %” icon turns fill on and off as desired.

Guide Lines are easily created by selecting a point and holding down the Shift key while adding a second point, then press G to get a Guide line on any angle. Press G again and get another to move for a parallel line at another location. Drag them off the screen when you are done with it, or play with Tools / Guideline Options. 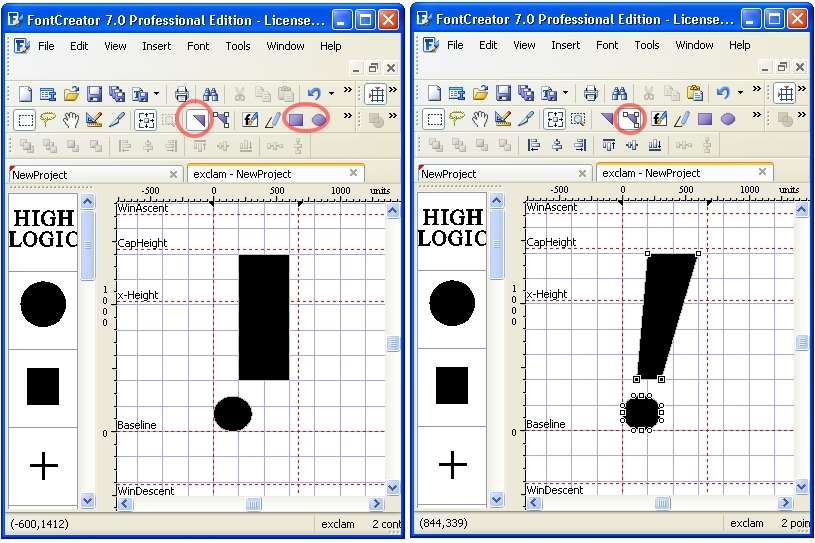 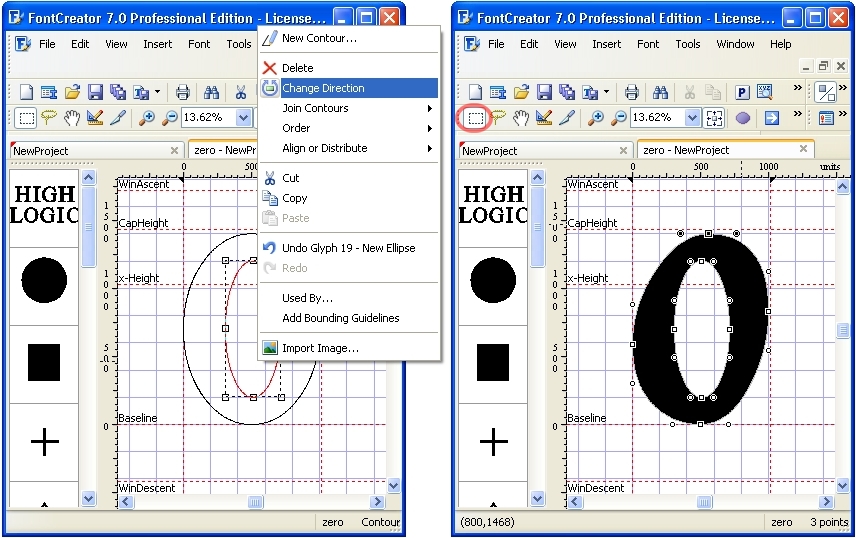 Much more information is available in the Manual and at the Forum where you are reading this.
Happy Fonting!
Aut nunc aut nunquam
Top

Re: Introduction to FontCreator V7-10

I just changed the title and added a brief update at the top of this article.
Aut nunc aut nunquam
Top
Post Reply
2 posts • Page 1 of 1