Before asking a question on FontCreator look here for possible solutions and tutorials. Please do not post support requests here.
Locked
2 posts • Page 1 of 1

Many things changed in FontCreator 12. Some sections of the previous tutorial on Complete Composites have been superseded, and many new definitions based on Glyph Names rather than on Glyph Mappings have been added. Glyph Mappings can be used within the definitions for unmapped glyphs, e.g. this one for Small Capital A will generate a composite from Latin Capital A:

The Unmapped Latin Small Capitals Transform script will use this code to compose Small Capital A, then decompose it, scale it down, and make it slightly bolder to compensate for the scaling.

FontCreator now has an Anchor Based Composites feature. Anchor-based composites usually improve the positioning of diacritics, especially for italic typefaces.

Definitions of Latin character sets use combining diacritics wherever they available, only using modifier letter accents as fallback glyphs. One can add several different types of combining diacritics for use with anchored based composites and the legacy complete composites features.
Unmapped Accented Petite Capitals and Small Capitals will use the previously defined base glyphs and accents designed for Petite or Small Capitals if they are available. The following definition first looks for a narrow dieresis accent designed to suit narrow glyphs like i, j, or l. If this is not available, or is incorrectly named, it will look for a smaller accent designed for Uppercase glyphs. If that is not available either, it will use the combining accent, and if that is missing it will use the dieresis accent in Latin-1 Supplement. The code will then centre the accent horizontally on the base glyph, and position it vertically offset from the top of the base glyph by a proportion of the height of the base glyph. The same proportion is used for both Petite and Small Capitals. The spacing could be adjusted by editing CompositeData.xml using a global find and replace if you find the spacing too tight or too loose.

Naming and Positioning of Diacritics

Since the code now uses glyph names, the correct spelling of the unmapped accents is critical. If it is incorrect, Complete Composites will not find them. Transform scripts will insert correctly named glyphs. Combining diacritics are named as acutecomb, gravecomb, etc., while the case-sensitive accents that are designed for Uppercase must have a suffix of .case, and must be positioned vertically for uppercase base glyphs. Narrow combining diacritics must have a suffix of .narrow, but must be positioned for lowercase glyphs, just like regular combining accents.

The horizontal position of diacritics is not critical as they are positioned horizontally by the code for base glyphs of different widths, but the advance width should be zero. Regular combining accents must be positioned vertically for lowercase glyphs. Diacritics are often centre-aligned vertically, but may be bottom-aligned. Use guidelines or the Transform Toolbar to aid with the correct positioning. 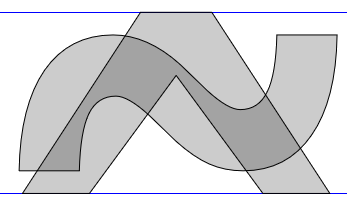 Complete Composites as a Design Aid

Many definitions in CompositeData.xml are intended just as an aid to design. The Per Mille Symbol, for example, is composed from Per Cent, and looks like this after composition: 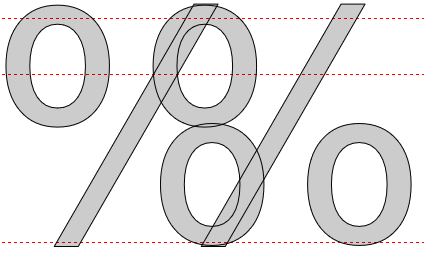 This is obviously not how the final glyph is meant to look. The user must decompose it, and delete unwanted contours. 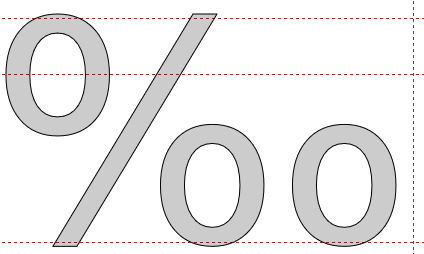 Re: Complete Composites in FontCreator 13

I have added definitions for eight more Miscellaneous Symbols that can be easily generated using composites using whitesquarewithroundedcorners, whitecircle, and periodcentered.

Stacking Fractions
Alternative Fractions (.afrc) or Stacking Fractions were also enhanced. They no longer need code-points to be assigned , they just require the correct glyph names e.g. onequarter.afrc, onenumerator.afrc, divisor.afrc, fourdenominator.afrc, and the appropriate composite glyph members to be included in the font.