Greetings, I have used FontCreator in the past and have just recently purchased a Standard Licence. I love the new features!

One thing I have noticed, having just finished a font, is the lack of some obvious shortcut hotkeys for Union, Intersect, Rectangle, etc. Are these something that can be added or the ability for the user to configure custom hotkeys?

In the meantime, I wrote a program in c# that hooks into Windows WM_SYSKEYDOWN event and sends mouse clicks to FontCreator's toolbars that I use often when I press various Alt+key combos.

I have also noticed that snap to grid only works when moving paths and drawing, and not for resizing. It's not a show-stopper but a bit of an inconvenience.

Great to be here,
codewar65
Top

Welcome to the forums.

I moved your thread to the Requests and Enhancements forum, as it seems to belong here rather than in the Discussion forum.

Customisable Shortcuts has been requested before.

In FontCreator 11.0 this can now be done easily with Access Keys. 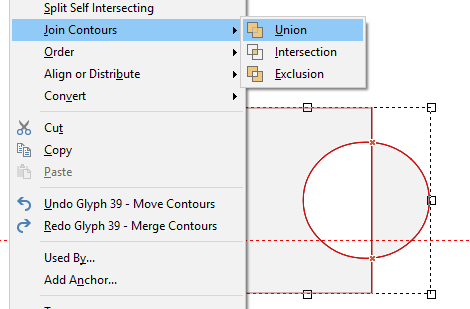