In many CAD systems there is a facility to drag and re-locate the origin i.e. the 0,0 co-ordinate.

This is usually temporary and does not affect the co-ordinates of any of the displayed points, it just adds an offset to them before putting them on the screen.

This facility would be useful when designing symetrical glyphs or glyphs where you want to know where things are relative to a point somewhere within the glyph.

For instance I put a the 'White Rose of Yorkshire' into Kelvinch, this is a very complicated glyph and started out as a pentagon. But I was constantly measuring things from each of the five corners and doing lots of sums on a calculator. I got around the problem by writing down the numbers and rotating the glyph by 72° about it's centre.

It would have been useful to locate the origin at each of the corners in turn and in the centre during this process.

I don't know how easy this would be to implement or if it is possible but it is something to consider.
Top

Re: Relocation of origin

I don't suppose it would be difficult to do. It might be something that just affected the rulers in the Glyph Edit Window without actually modifying the glyph.

However, since the work around is so easy to do, it doesn't seem very necessary. 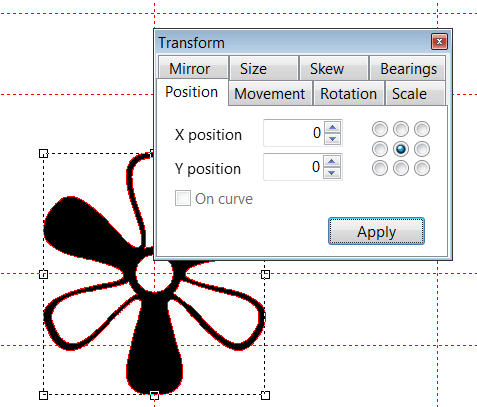