Mass kerning of second glyph in a pair

Mass kerning of second glyph in a pair

I know I've already said this, but I'd really like a way to select all of the second glyph in a pair and be able to paste it onto another font.

by Erwin Denissen
It would help if you or other people could give us your opinion about how we should implement it.

Thanks for the reply, I'm afraid I'm of little help in giving you my opinion of how to implement it other than to suggest that it be an available option in the kerning "PairAdjustment" feature.

I rely on the community of experts here to give you a more helpful suggestion, so all in the community please do help Erwin out if you can with this, it'll save me oodles of time. In the meantime I'm having to write then down on paper and individually enter the kerning values. It's very inefficient.

Thanks everyone ahead of time,

by MikeW
I'm not envisioning what you are doing and so have no real idea of what it is to accomplish...

That said, I often enough copy the kerning code sans the opening/closing code, paste it into a decent text editor, replace the spaces with a tab, then copy and paste into Excel where each part is in its own column.

I can then sort the results on a particular column.

I use spreadsheets for other code manipulation.

by Jonne Haven
Thanks for your reply Mike,

To explain what I'm trying to do may be better if I supply a pic as per below.

When I open the Code Editor, all of the pairs that start with "L Alternate" are in order and can be easily copied into my similar but slightly different version of the font. However when the pair does not start with "L Alternate" (any other letter), the Code Editor spreads out the "L Alternate" depending on what the first letter of the pair is. I'm trying to get FontCreator to select all of these "spread out" pairings to make themselves available for easy cutting and pasting into my other font.

I think the best way to implement this idea is to allow the PairAdjustment to select all of the pairings that have "L Alternate" in them to be mass selected some how and have the ability to paste the selection bearing in mind that the selection will have to spread out the pairings of "L Alternate" to the appropriate pairings when the first glyph is not "L Alternate". I understand that this is a heavy request that will probably take too much work, but if I had to guess how to do it, this is the only way I can think of.

If there is another efficient way of doing this, I'm all ears. This ability would save me a lot of time and a lot of pencil lead.

But as I mentioned, I use a spreadsheet. I copy all the kern code between the opening/closing brackets, paste into a text editor, do a mass find/replace for spaces and replace with tabs. Once done, I paste into a new spreadsheet and sort, in this case, column C in the screen shot (the second classes). 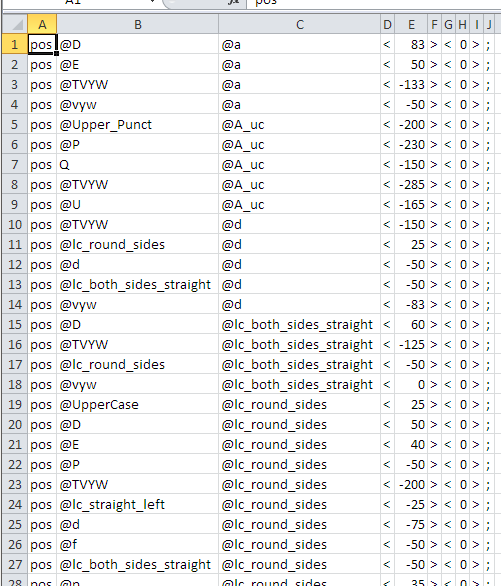 I could then do ad hoc changes to class names if I need to, change values in the appropriate sections of columns, etc. I use a programming editor and mostly do changes there. But either way, when done I paste back into the editor, and sometimes F/R the tabs back to spaces (though that is unneeded). Copy back into FC (I leave the kern code selected so a paste replaces what is there), click the OK button and am done.

I most often use this method for changing glyph names for features and have a set of macros I run in the editor for so doing. Its all quicker than writing this post...
All times are UTC
Page 1 of 1
Powered by phpBB® Forum Software © phpBB Limited
https://www.phpbb.com/