This may already be there and I don't know how to find it, but how about a table summarizing the metrics for each glyph? That way, at a glance, you can see whether the height, bearings, you name it, are reasonable or need some adjustment. It would also be very handy for novices like me to compare one's work against an established font (say, Garamond) to get general guidance. Thanks in advance.
Top

I deleted your duplicate thread in the Support forum, as I am sure that such a feature does not exist.

I don't understand how this could help in designing a clone of an existing font unless you're doing something dodgy like copying the glyph outlines to a new font.

You could just copy the metrics, and paste with Paste Special, but a new font needs different bearings to look right. FontCreator's Optical Metrics feature will do much of the hard work for you by calculating suitable bearings for the glyph outlines.

Thanks for that link to the discussion.

What I'm after would be metrics that a more-or-less-related selection of fonts (say, serif fonts very roughly along the lines of Garamond or Georgia) use, so I could find average / typical values as starting points to adjust to suit my tastes. Definitely not talking about cloning metrics; rather, looking for some rough equivalent of what I'll call good practices.
Top

1940LaSalle wrote: ↑
Fri Aug 03, 2018 7:02 pm
Definitely not talking about cloning metrics; rather, looking for some rough equivalent of what I'll call good practices.

That's definitely a good use case for such a table, and certainly acceptable to even the most overprotective about font intellectual property.
Top

I think it is an exercise in futility and likely to cause more confusion than good. Especially how this really cannot be easily automated in FC to move one from another.

If one so chooses, one can output to a .afm file (Adobe Font Metrics), which is what a Type 1 PostScript font uses. This is human readable and corresponds to the viewer in the mentioned application. 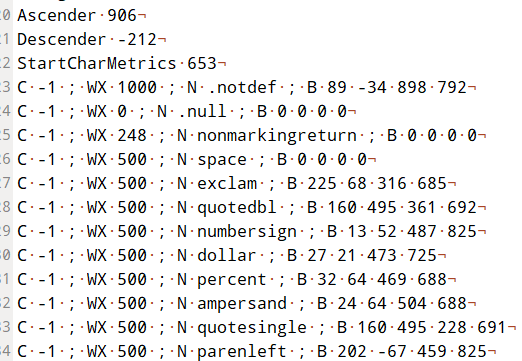 One could then use a text editor to remove the full header (not all is shown) and replace spaces with tabs, copy and paste into Excel or another spreadsheet and do the subtraction I show in the first screen shot.

It really wouldn't take long--likely less time it has taken me to start DTL OTMaster,, take some screen shots and write this post.

But like I mention, not sure what there really is to gain.
Top

Like I said above: it's to get a handle on what might be called generally accepted good practices. I'm an engineer, and a lot of sizing of equipment is based on good practices for proportions. Thus, I approach font design from an engineer's viewpoint, and would like to see such practices documented. By the way, thanks for the suggestion on getting the metrics in an .afm file.

Just one question: how do I do that? It doesn't seem to come up as a "save as" or "export" option that I see, but I could be missing something. Thanks.
Top

Any difference in shape from one character to another from one font to another can/will affect what is good practice. As well, some designers will have looser/tighter bearings on the same font than others would. This isn't like bearing tolerances or engineering for lift-load capacities, nor ...

My post about AFM are all based on using another toolfor both viewing and exporting an AFM file:

And what tool is that, please?

I realize that there's a decided aesthetic element to font design that makes what I'll call good practice more nebulous than it is in engineering; however, reason suggests to me that there have to be some guidelines that could be derived from the most successful / classic fonts. Gotta learn from the masters...thanks
Top

I've told you what the application is twice.

If you swapped metrics one to the other and generated a font (or used the Preview function in FC) they would simply be wrong when next to any other character.

Research for research's sake is fine. Data can be both illuminating and misinterpreted/misapplied. I think if you understood font metrics and how metrics interplay with the other characters in a font, how design and aesthetics dictate the metrics, you wouldn't go down this road and draw conclusions from metrics. Certainly not draw applicable conclusions.

One would have to have two fonts drawn nearly exact to each other for metrics from font A mean anything to font B. People have made metrically compatible fonts so they (in theory) be swapped out and not have the type runs change. But that is a purposeful task (that doesn't always turn out as supposed).

I think loading various fonts in FC and going character by character between them, studying the character design and comparing the metrics may have better value. Font metrics alone (like the export I did above of the ATM file) means little to nothing divorced from the actual character designs themselves.

But hey, Google the above application and have at it. I might be wrong and this endeavor may prove to have value.
Top