Imagine please if museum and art gallery websites each were to have an international webpage in its on-line shop.

If there were on the webpage colourful symbols, one each for Surname, Forename, Card number and so on and the end-user could display text in his or her own language by displaying the appropriate read-out label next to each symbol, thus localizing the web page, then that could be very helpful.

I have produced designs for nine symbols. There are two glyphs for each symbol, one colourful and one monochrome. The symbols are octagonal, using not quite a regular octagon. In the monochrome glyphs there is a border around the edge, yet in the colourful glyphs there is no border. The colourful glyphs are displayed in blue and orange, the idea being that the effect to the viewer is of blue upon an orange background.

The designs are influenced by heraldry to some extent.

This is because I consider Surname to be the most important, so I used a heraldic chief.

Then for Forename I used a pale as Forename is different from Surname yet accompanies to Surname to form a name.

A bar is used for Address.

Name as on card may be different from Forename concatenated with a space and Surname, due to use of Mr Mrs Miss Ms etc and initials, hence the reason for the design not being a union of a chief and one pale.

Card security code is just a design so as to be different from the other designs yet not use any diagonal shapes.

Delivery address is included to allow for the possibility of sending a gift directly to someone who lives at another address.

Here are images showing the designs. 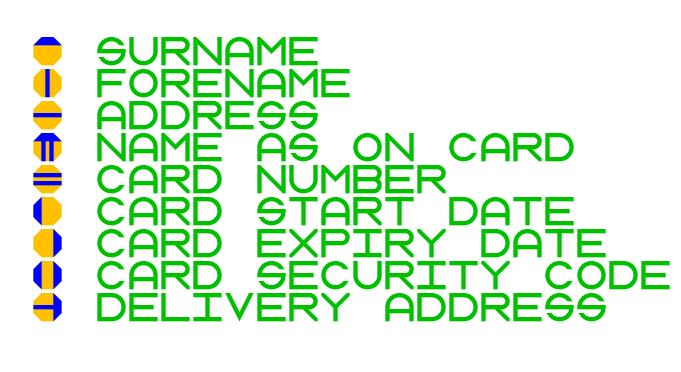 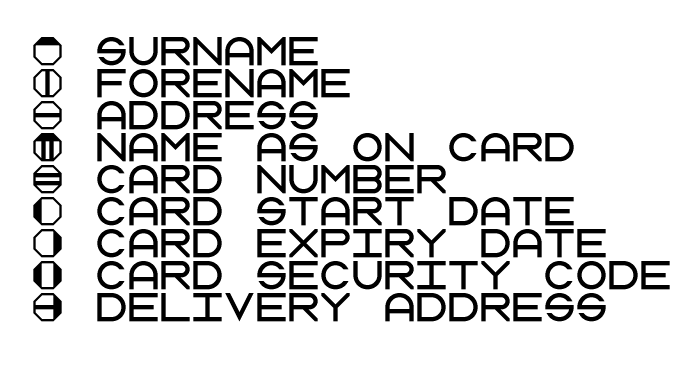 I had some problems doing it, but Bhikkhu Pesala kindly advised me in the following thread and so I was able to produce the desired result.

Here are some pictures.

I am hoping to use the artwork to make a font using a plane 0 Private Use Area mapping and then make a web font and apply it.

Yet I need to learn how to apply a web font. So I have started a thread about applying a web font.

I am hoping to develop the application of these glyph designs.

Several computers later and I feared that I had lost the artwork.

Yet fortunately I found from the linked thread that I had emailed to myself, copies of the .fcp project files.

So I have recovered the second one, saved it as version 003 and produced a font.

The glyphs to use are encoded as 1 through to 9 and colon.

It is a colour font with monochrome fallback.

I hope to produce a later version with Private Area Use mappings and also OpenType sequence mappings as if the ten glyphs are ligatures.

Yet here is the font to try out the glyphs if readers so choose.

The font has a .otf extension but there are no OpenType features at present.