by Bhikkhu Pesala
Download 7-Zip Archive
Garava 3.21 completes the currency symbols for Unicode 7.0 and fixes some bugs. The Heavy type style was renamed to Extra-Bold, and an Extra-Bold Italic style was added. The six styles are now all part of a single font family. Many more kerning pairs were added. Mathematical symbols were made more consistent for central vertical alignment on the figures.

It was designed for body text in Buddhist Publications. It has a generous x-height and economical copyfit. "Garava" is a Pali word meaning "reverence."

A full range of Latin characters means it can be used for Pali, Sanskrit, Romanised Indic scripts, nearly all European languages, and Vietnamese. A basic Greek character set, and a wide range of symbols extend its usefulness to other academic fields such as maths and science. Maths and currency symbols are designed on the figure width, while other symbols, arrows, and geometric shapes are a uniform width and align with the Caps height wherever the design permits. Superscripts align with the tops of figures, while subscripts bisect the baseline.

Besides the expected regular, italic, bold, and bold italic styles, the Garava font family includes an Extra-Bold style, and Italics. Small Capitals and Petite Capitals are available in each of the four base type styles, so the Small Capitals type styles are no longer supported. Only Petite Capitals are available in the Extra-Bold styles, and there are lowercase superscripts for ordinals, but not a full set for superscript text, as there is in the Regular styles. 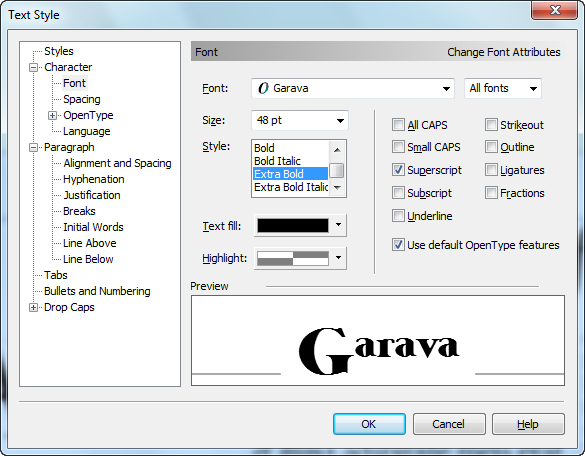 by Bhikkhu Pesala
Garava has been updated to version 2.1. The updated fonts have OpenType features for Ligatures, Petite Caps, OldStyle Figures, Superscripts, Scientific Inferiors, and Nut Fractions. The kerning pairs were extended and improved again with the help of the latest version of FontCreator 5.6, which is now much easier to use for manual kerning, and can import/export kerning values from/to a text file.

The Small Capitals in separate type styles replace the lowercase and are 80% of the Capital Height. These now have small caps figures for use with lowercase, which will be substituted if either the PetiteCaps or OldStyle Figures OpenType feature are enabled.

by Bhikkhu Pesala
Updated to version 2.4

by Bhikkhu Pesala
Updated to version 2.5

by Bhikkhu Pesala
Updated to Version 2.6

by Erwin Denissen
Another great addition to your achievements.

by Bhikkhu Pesala
Updated again to 3.21 to improve the spacing of stacking fractions and the kerning for them

Updated to 3.30 to complete the currency symbols for Unicode 7.0

by Bhikkhu Pesala
Updated again to 3.40 to improve the order of priority of OpenType features. Standard and Discretionary Ligatures no longer take precedence over Small and Petite Capital features.

Kerning pairs were also improved and some bugs in the Extra Bold Italic style were fixed.

by Bhikkhu Pesala
Garava 3.70 was updated with additional glyphs and OpenType Features for Swashes and Initial Forms. Most users won't be able to see the glyphs in colour outside of FontCreator, but let me know if you have an application that supports colour fonts in Windows 8.1 or Windows 10.

I have used FontCreator 9.0 to improve the order of OpenType Features, and to find several bugs. Let me know if you spot any more.

by DanPLyons
That's a lot of kerning pairs, Bhikkhu!

Fortunately, class based kerning in FontCreator 9.0 makes it easy to generate kerning pairs. There are only 1,014 pairs of classes.

by Bhikkhu Pesala
Garava was updated to version 3.73 to fix a bug with kerning.

by Bhikkhu Pesala
Garava was updated to version 3.80 to replace Initial Forms with Stylistic Alternates, and to replace the existing Stylistic Alternates with Character Variants. This was necessary to avoid a problem caused by a significant change to the description of initial forms made by Microsoft. Initial forms are enabled by default and not meant to be exposed to the user, so they cannot be disabled in modern applications.
All times are UTC
Page 1 of 2
Powered by phpBB® Forum Software © phpBB Limited
https://www.phpbb.com/