Using a Public Domain version of Goudy Bertham, I added a full set of glyphs, and some Gothic drop capitals. Then I thought, why not add a few fancy ligatures?"

Due to the decorative drop capitals, the default line-spacing for this font is 152%. I recommend using proportional line-spacing or fixed line-spacing to reduce it.

This is how the font looks with the Coloured Stylistic Alternates. The font has regular capitals in the usual place. The bold style uses different glyphs for these. 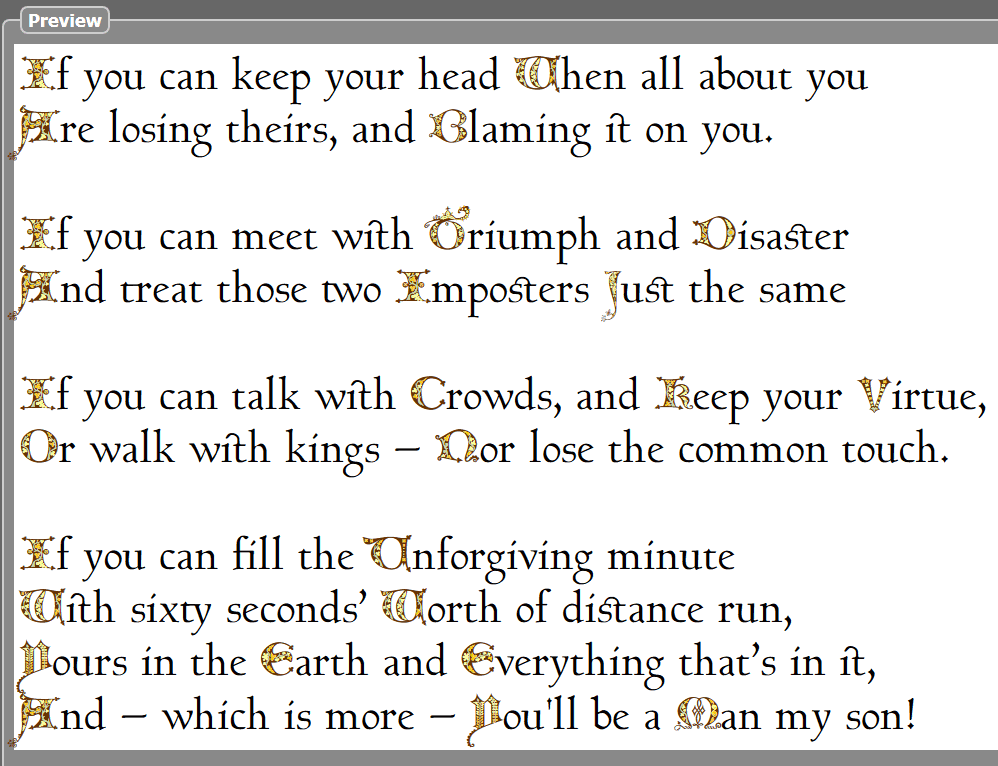 by Bhikkhu Pesala
As well as the common ff, fl, fi ligatures, I added a few more. They are very easy to make with the knife tool and "Get Union of Contours," which is available in the Professional Edition of FontCreator. 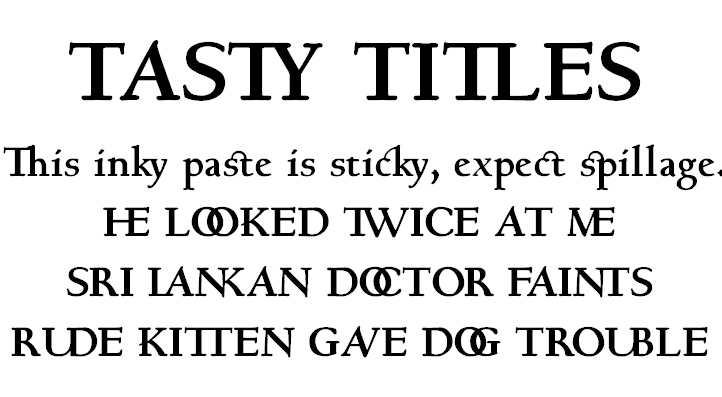 by Dave Crosby
A beautiful font! Thank you for sharing.
by Bhikkhu Pesala
Version 1.1 corrects some bugs. It seems that Page Plus doesn't like the extended latin characters in the name "Tālapanna" and so refuses to embed the font in PDF files. I also corrected ƒ and the integral sign.
by Bhikkhu Pesala
I added OpenType features to both Talapanna, and a few more ligatures to complete the set. I remapped the Gothic capitals to a different position in the PUA for greater consistency.

The Gothic Drop Capitals can be accessed in programs that support OpenType features by using the "Initial Capitals" feature. The Bold typestyle uses a different set of Drop Capital designs.

The fonts include glyph substitions for superscripts and scientific inferiors (which bisect the baseline).

See this tutorial on Adding OpenType Features to learn how to do this.

by Bhikkhu Pesala
Updated to version 2.2 to fix a mapping problem and a problem with OpenType tags.

by Bhikkhu Pesala
Version 2.5 adds a few more standard ligatures for fb ffb fh ffh fk and ffk (see the Typophile forums for a list of words that use these.

by Bhikkhu Pesala
Version 2.90 adds standard ligatures for fff and fffl, and discretionary ligatures for sf, sfi, sfy, sh, and sk, and some Ornaments for typing chess symbols.

Subscripts were added for a-z to improve the fractions feature to include x/y or ab/31 etc.

Some more kerning pairs and an ffj ligature were added, and some bugs were fixed.

Localized Forms were added for Romanian, fij and ij acute ligatures were added for Dutch. Kerning classes were improved, and more kerning pairs were added.
All times are UTC
Page 1 of 1
Powered by phpBB® Forum Software © phpBB Limited
https://www.phpbb.com/