by William
I have been trying the Odana font initial capitals in PagePlus X5.

They are really nice.

I particularly like the T and the Q with its long tail.

by Bhikkhu Pesala
Although there is only one type style, the update to version 2.60 took a couple of days as I had to update several things for FontCreator 8.0.

by Bhikkhu Pesala
Updated to version 2.70.

After extensive cleaning up and smoothing of the Initial Forms to reduce the number of nodes, hinting succeeded without the need for the above workaround. Importing from WMF is never very good, so a lot of smoothing is required to get a high quality result.

by Bhikkhu Pesala
Updated to version 2.80.

After more cleaning up and smoothing of the Initial Forms to reduce the number of nodes, hinting succeeded without the need for workarounds. All of the complex glyphs have now been smoothed as much as necessary, further reducing the number of nodes. 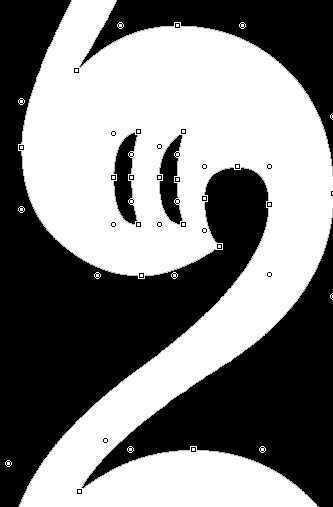 Standard ligatures were added for fff, fffl, and discretionary ligatures for sf, sfi, sfy, sh, and sk. More kerning pairs, including some positive pairs, brings the total to over 20,000.

by Bhikkhu Pesala
Version 2.90 adds colour to the Initial Forms and completes the Latin Extended Additional, Number Forms and Dingbats Character Sets. The 7-zip archive also includes smaller Web and WOFF versions with only a few symbols. The web versions still contain the Coloured Glyphs for Stylistic Alternates, which can currently be viewed only in Firefox.

Updates to TTFautohint seem to have fixed the issues with hinting.

See this tutorial thread to see how the coloured glyphs were created. 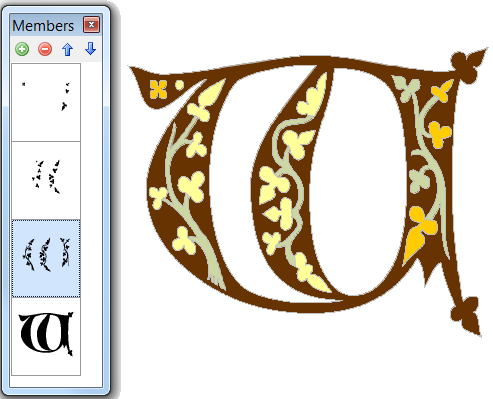 by Bhikkhu Pesala
Version 3.30 removed Titling Capitals and replaced them with a GPOS Titling feature. The contours and spacing of many glyphs were improved.

by Bhikkhu Pesala
Version 3.50 further improved the colour glyphs and some other glyphs, replaced contextual ligatures with a stylistic set, harmonised the height of symbols and arrows, added four glyphs with ogonek for Nordic and two glyphs for irony punctuation. Some kerning pairs were also added. The WOFF versions are unhinted to reduce the file size to a minimum.

by Bhikkhu Pesala
Version 3.61 uses 8192 units/em instead of the usual 2048 units/em to support finer detail for the coloured decorative capitals. The rarely used latin extended superscripts were removed, leaving only those few required for Ordinals. A positionindicator glyph was added to Miscellaneous Technical, and globewithmeridians and electriclightbulb glyphs were added to Miscellaneous Symbols and Pictographs. The clock symbols were improved. An Access All Alternates feature was added. The WOFF versions are unhinted to reduce file sizes. If you want to add hinting to the WOFF versions, this can be done using the free ttfautohint utility, which is what FontCreator uses to hint fonts.