Now eight typestyles, 2,359 Glyphs. The Initial Forms (Word Start Alternates) were removed because I don't think they add anything new to the font. They only make more work and bloat the font archive.

This completes the updates for all of my OpenType Fonts since the release of FontCreator 8.0 on 5th June. The new grouped-based kerning works very well, and greatly reduces the work-load for kerning large fonts. Small Capitals, Petite Capitals, and some Superscripts need kerning too, but with only a few hundred adjustment pairs to check after running Autokern, it doesn't take very long.

After checking one style carefully, export the script, and import that into another style of the same font, or even into a different font. Autokern will adjust the spacing to suit the font. Check for pairs like c- L- Z- or -J, which may be absurdly tight.

by Bhikkhu Pesala
Version 2.80 fixes a bug in the OpenType feature precedence. You can now use Petite Capitals without disabling Standard and Discretionary Ligatures.

by Bhikkhu Pesala
Kabala was updated to version 2.90. The spacing of the Semi-bold styles was improved to fit better between regular and bold. 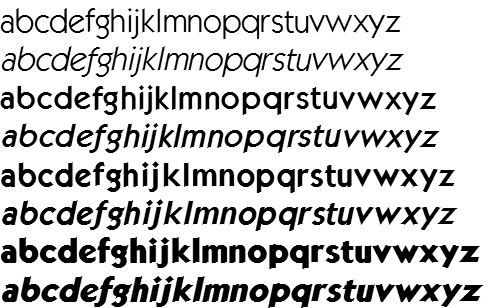 The Alternative Fractions were improved for bold and semi-bold styles.

The improvements in FontCreator 10.1 certainly speed things up.

by Bhikkhu Pesala
Version 3.40 was updated with FontCreator 10.1.

by Bhikkhu Pesala
Version 3.41 fixed a bug in the fractions feature. Standard fractions were not being used at all as the lookups were in the wrong order.

The fonts also no longer include glyph names as they are no longer needed. This reduces file sizes. Removing the legacy kerning tables would reduce file size even more, but kerning would not then work in older applications, e.g. any version of PagePlus prior to PagePlus X9, which is the first to support GPOS kerning.