Whilst experimenting as in the previous post in this thread, I tried a design using the Lowercase p with long decorated flourish glyph from previously, which is also in the Sonnet Calligraphic 020 font.

The pdf seems fine. I have tried displaying it on screen, though not in hardcopy print.

However, the graphic, which is in the same size as the other graphics thus far displayed in this thread, does not seem to work too well, due to the fine line of the decoration within the flourish. However, the graphic is included here so as to show that effect.

pineapple.pdf
Trying one of the calligraphic alternate glyphs of the Sonnet Calligraphic 020 font
(3.49 KiB) Downloaded 290 times 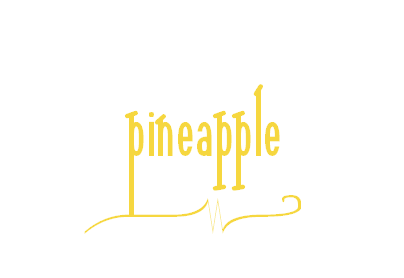 Trying one of the calligraphic alternate glyphs of the Sonnet Calligraphic 020 font
pineapple.png (6.77 KiB) Viewed 9763 times

Some readers might like these two print screen images made at 16% from FontCreator 5.6 and then made into graphic files using Microsoft Paint showing an early stage and the final stage of producing the Lowercase h with spiral flourish glyph. The first image has been reconstructed from the final stage of the glyph, but is as it was at the time of the original design. 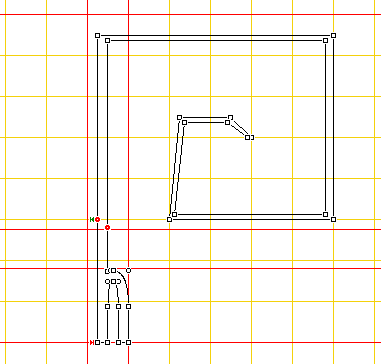 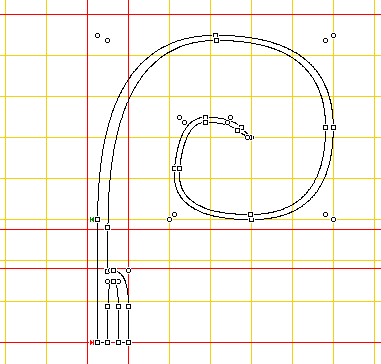 The early stage image shows how a framework has been produced using straight lines. Verticals and horizontals are not the same width. The ascender is 64 font units wide and the vertical section at the right is 48 font units wide. The other sections are mostly 32 font units wide, though the tip of the spiral is not quite so wide.

I hope that this is of interest.

The two designs in this post were produced on Saturday 17 April 2010.

They show much the same design ideas as in some of the examples uploaded on that day, yet some readers may perhaps nonetheless find them of interest.

ecotown.pdf
Trying one of the calligraphic alternate glyphs of the Sonnet Calligraphic 020 font
(5.88 KiB) Downloaded 269 times 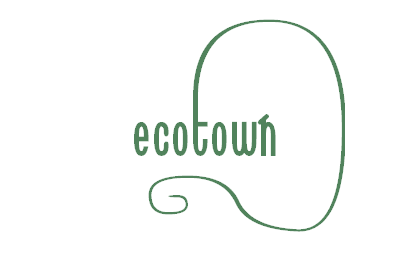 Trying one of the calligraphic alternate glyphs of the Sonnet Calligraphic 020 font
ecotown.png (9.12 KiB) Viewed 9742 times

holly2.pdf
Trying one of the calligraphic alternate glyphs of the Sonnet Calligraphic 020 font
(5.71 KiB) Downloaded 288 times 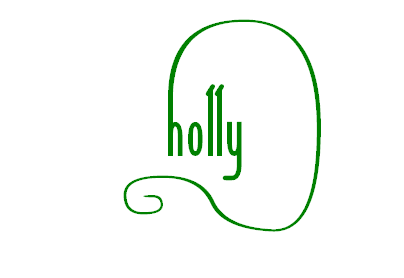 Trying one of the calligraphic alternate glyphs of the Sonnet Calligraphic 020 font
holly.png (8.57 KiB) Viewed 9742 times

If one tries to make a diagram, using the Sonnet Calligraphic 020 font, the diagram being of the same nature as the first diagram within the post in this thread that is timestamped as Sat Apr 17, 2010 4:58 pm, such that the new diagram would show the underlying construction of the calligraphic curve in the glyph at U+E5E6 in the Sonnet Calligraphic 020 font, then the resulting diagram does not show the structure as the design was intended. This being due to mistakes made in the process of producing the glyph.

Thus I decided to correct the design. The design is for a letter t. The glyphs at U+E5E8, U+E5EA, U+E5EC and U+E5EE (namely b, h, k and lowercase l) were each constructed using a copy of part of the glyph at U+E5E6, thus they needed correction as well.

There is little change to the overall visual display of the glyphs, yet I felt that I wanted to correct the errors, so I produced the Sonnet Calligraphic 021 font.

Here are diagrams of a calligraphic h produced using the Sonnet Calligraphic 021 font at 72 point in WordPad and of a reconstructed design in FontCreator showing an early stage of the design. The orange grid being used in FontCreator is at 256 font unit intervals. Both diagrams were produced by making a Print Screen and then pasting into Paint and then trimming and saving as a png graphic file. 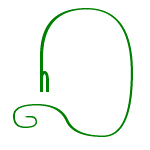 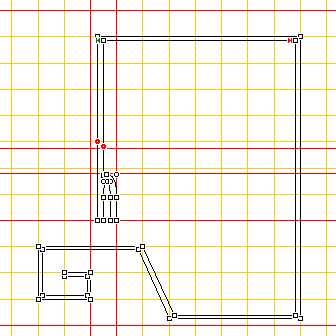 Last Saturday morning I experimented with adding some glyphs each of a letter b each with a high sinewave-like calligraphic swash.

The idea is that the sinewave-like calligraphic swash is produced with a minimum number of points. I began with just off-curve points spaced either 256 font units or 512 font units horizontally apart and each with one of just two vertical positions. Thus the sinewave-like calligraphic swash is produced largely by the mathematical nature of the Bézier curves used in TrueType fonts. I then added an on-curve point mid-way between each pair of adjacent off-curve points.

Add U+E5EF Alt 58863 as a copy of U+E5E7 and then delete all except the basic letter b.
Add a sine-wave-like flourish.

There are eight blocks of 256 to go in by 256 either down or up.
So that is 32 font units per block for a linear diminishing.
This leaves one point as off-curve extreme, so use automated validation to fix this problem.

This seems to be too much diminishing, on a purely subjective aesthetic basis.

Here is some text ready to copy onto the clipboard and then paste into WordPad and then format at 72 point using the Sonnet Calligraphic 022 font in case any readers would like to try the font.

On Monday 10 May 2010 I produced the Sonnet Calligraphic 023 font, which adds one glyph, a calligraphic f somewhat lower than the previous calligraphic letters f.

Try to redesign the U+E5F2 glyph of an f so that the phrase eautiul cairap looks good.
Try to use a copy of the flourish with the going back piece from U+E5BB, a glyph of a b.
Yet maybe somewhat higher.
Various moving of points tried so as to get a first attempt.
That includes some from the lower flourish so that it looks more balanced.

Earlier this morning I used the font with the Serif PagePlus version X3 program to produce both a pdf document file and a png graphic file of the phrase beautiful calligraphy. 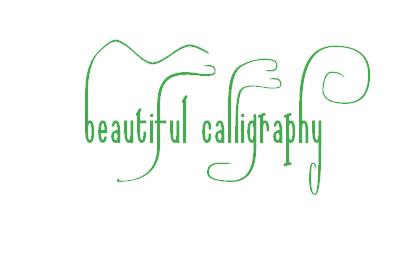 Yesterday I experimented by trying to add a calligraphic version of a v to the font.

In the event, three glyphs were added.

The coordinate values of the upper left point of the right side of the v were noted.

The coordinate values of the lower left point of the copy of the lone right side were noted.

The two contours were then joined. This produced a single contour of a v with a longer right side.

The extending process was repeated so that a still longer right side was produced.

Along the way a few points were deleted from the right side as thought desirable.

Here is a transcript of the notes that I added to a WordPad .rtf file as I went along.

The glyph seems to curve off at too high a point.

Copy it as U+E5F4 Alt 58868 and try to make the curve start at a lower point.
Try, for each side of the line, splitting the difference and deleting the upper points from where the curve started previously.

Which of the latest two glyphs is better? Or does it depend upon the text with which it is used?

Alter U+E5F3, U+E5F4 and U+E5F5 so that each has a three point rounded end on the calligraphic flourish.
Use a height of three-quarters of the width. That is a height of 24 font units with a width of 32 font units.

Yesterday I made a new version of the font, adding four glyphs.

Here is a transcript of the notes that I made in a WordPad .rtf file as I proceeded.

Yesterday I was experimenting with using the font and tried typesetting the following.

beautiful calligraphy in the style of the renaissance

In the word renaissance, although a swash end-of-word calligraphic e can be used, the font has nothing that allows the word to stand out. I thought that it would be worth trying to add a calligraphic double long-s glyph to the font.

Make the advance width of each 128 font units.

The advance width is increased to 256 font units.

Lower the ascender of the second s by 128 font units.

On Friday 28 May 2010 I made a new version of the font. This version adds two glyphs.

Make the advance width of each 128 font units.

The long-s made from a copy of the second of the contours needs moving to the left by 128 font units.

The advance width of the lowercase l needs changing to become 128 font units.

Yesterday afternoon I added one glyph to the font.

The additional glyph is mapped to U+E60A Alt 58890. It is a calligraphic lowercase l, designed so that a non-overlapping double lowercase l can be produced when U+E5FE Alt 58878 and U+E60A Alt 58890 are used together. For example in the word windmill.

Add U+E60A Alt 58890 by adapting a copy of U+E5FE Alt 58878 so that a non-overlapping double lowercase l can be produced when U+E5FE and U+E60A are used together. For example in the word windmill. This is at U+E60A rather than at U+E600 as ten spaces are left unused at present so that hopefully variations on ct and st etc so as not to clash with the ascenders of a following lowercase l can be produced.
Move all of the points above the baseline down by 256 font units. That is, move all but two of the points down by 256 font units.

Here is a transcript of the notes that I wrote as I made the additions.

I have been having some fun trying the Sonnet Calligraphic 029 font within a multimedia authoring program named Opus Creator.

I have exported a stand-alone executable file for a PC and I have uploaded it to our family webspace. It is 2,075,106 bytes in size.

In addition, as it is a .exe file and I am making it available on the web, I emailed a copy from one email address to another, the receiving email address holding emails on the server and having a virus-checking system that checks a file before allowing one to download it to local storage and it reported "No virus threat detected".

The .exe file was exported from Opus Creator earlier this afternoon, by me, on the same computer that I regularly use. For provenance I mention that Opus Creator is made by Digital Workshop and http://www.digitalworkshop.com is their webspace.

However, upon running the program, Windows prompts and says that it is from an Unknown Publisher. At present I do not know how, or if, without disproportionate cost, I can change that.

Anyway, all it does is draw some text on the screen, glyph by glyph, one at a time, using the Sonnet Calligraphic 029 font.