Google Streetview has some views of a coop in San Gimignano, Italy.

For example, the following.

I am interested in architecture, though I am not an architect, and have noticed various designs elsewhere where there is a complicated curved roof designed by computer.

As I am also interested in using FontCreator to make special fonts that allow me to get exceptional performanace from the Serif ImpactPlus 5 program, I decided to try to make an experimental font that would allow modelling of a building based on the San Gimignano coop with its arch door yet having a complicated curved roof.

The attached font is the result.

I started the font by making a copy of the Disc and Annuli font. This was because that font was already set up with the metrics that I wanted.

In the event I added two glyphs to the font, encoded as lowercase a and lowercase b.

The glyph encoded at lowercase a is the front of the building, with an entry arch, two tall windows and an upper edge to fit the curved roof.

The remaining contour was then copied and pasted and then the copy was moved upward by 128 font units. After that, the original contour within the glyph encoded at lowercase b had its direction changed. The two contours were then joined and various points were deleted so as to produce a single contour of a section of the roof. 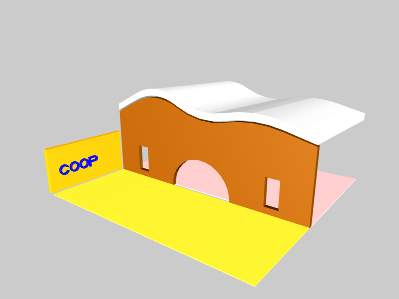 
As it happens, I needed to refer back to the sizes of the glyphs in the font and use Microsoft Calculator so as to be able to scale the objects within ImpactPlus 5 so that it all fits together easily, so the font needs some scaling tables to go with it for the benefit of anyone using ImpactPlus 5 who does not also use FontCreator.

The glyph at lowercase b produces a display that is 4096 wide by 512 high.

I used a width of 500 for the front wall object within ImpactPlus for my experiment, though I now think that using 512 would be better for this model, as it would enable use of a straightforward to use scaling of 1 ImpactPlus unit for every 8 font units.