Here's a font I created with Scanahand, it is based on a commercial Garamond font, and has the various ligatures used in Old English (early 1700's) together with the AE, OE, ae, and oe ligatures. I have no problems if anyone would like to change the name or modify the font in any way, as far as I'm concerned it's public domain.

I really would like a critique of it if anyone uses it because I'd like to improve it. I've spent much time on kerning but I know it could be improved.

I think I'd also look at cleaning up all the joints. They all seem to have a bit of ink bleed, and could stand to get pulled into the corners instead of getting rounded off. I put together a quick before and after on the upper right of the letter "M" (scroll the pic down to compare the armpit) 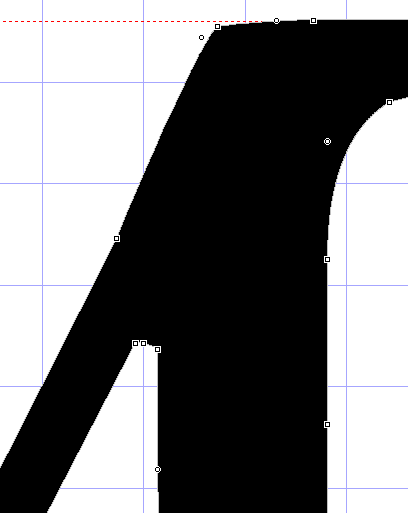 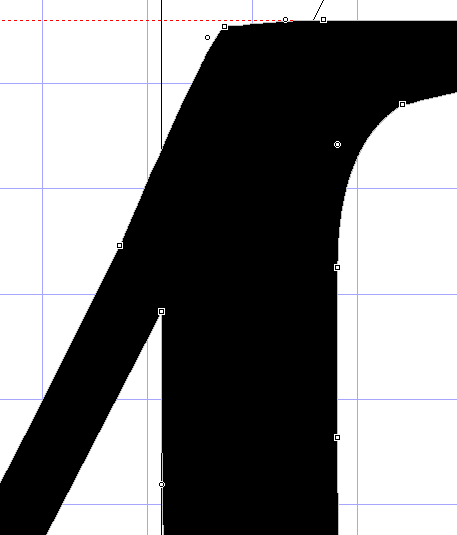 vanisaac,
Thanks for the rapid reply and suggestions as to the font. I hadn't realized that the ligatures had already been assigned their unique values, and I'll change their assignments as suggested. I mistakenly thought that any of the private use values would be ok for them. Also, will try to clean up the control points. I greatly appreciate your comments.
Last edited by bobcdy on Fri Sep 02, 2011 10:17 pm, edited 1 time in total.
Top

I was perusing through the font, and I also noted that there were a number of other printing artefacts, such as a little 5-point nodule in the middle of a straight line. You can safely reduce these down to a single point if you don't want to have those little imperfections lying around. The real key is just going through all of your outlines and seeing if there aren't areas that have a tight grouping of several points, and whether you can't simplify that down to only one or two.
Top

Yes, I noticed that. I've attached a screen capture of part of the 'A' - there should be smoothly rounded transitions from the top of the middle bar to the sloping sides of the glyph, but unfortunately I'm a beginner with FontCreator and don't know how to change the sharp corners to smoothly rounded curves. Can anyone help with this? 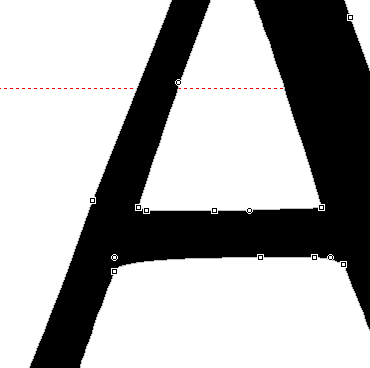 So, on the bottom left of the horizontal bar, where it meets the leg; what you can do is move the on contour point (square-shaped) from close to the middle of the bar to the left, until it forms a nice little arc. Use the transformation toolbar's movement tab to get only horizontal movement. You can have it match up with the right side. Or, if you want a crisp transition, change the two off-curve (circle) points to on-curve by right clicking and selecting "on curve". You can then delete all the rest of the points. The tranformation:position tab can ensure that the two are at the same height by selecting them both, and entering a y position copied from either of the points.

Also, read up on guidelines, because they can help you with a lot of these rounded corners by finding the implied intersection of two stems.
Top

Well, here's my next iteration of the garamond font. I've tried to clean up the glyphs with FontCreator and spent some more time on kerning. I know it still need some work, so I'd appreciate any comments about improvements. I noticed that Scanahand has some minor problems with creating this font:

1. I placed the characters very carefully within the guidelines for x height and cap height, but the resulting font was still significantly larger than what it should have been - this required reducing the glyph sizes to 70% both H and V.

2. Although I used the equivalent of a 1000 dpi resolution for the scan, and used the extreme option for font generation, there still were a number of deviations from the scanned characters and the resultant Scanahand ones. Thus it was necessary for most of the glyphs to clean them up and add/delete/change points to better create smooth curves rather than sharp changes in direction. I experimented with 1600 dpi scans but couldn't get Scanahand to load these higher resolution scans, even using my fastest computer with 6 gig ram and 3.0 quad core processor. The 1000 dpi was the highest resolution I could get to work with Scanahand with that computer. Apparently that was still not large enough for Scanahand to correctly approximate the character outlines.

In spite of the relatively minor problems with Scanahand, it really is a very useful program and the authors deserve much praise.