This is a group of symbol fonts which trace the life and times of Aesop of Fable Fame. 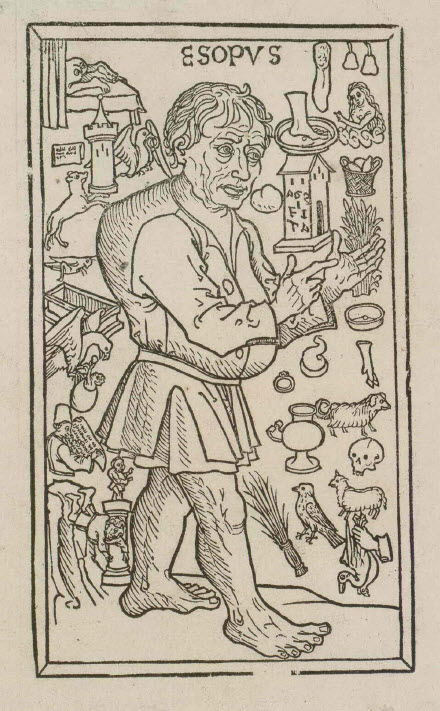 The first font is an overview of Aesop's life while the others illustrate his moral lessons.

The illustrations come from the second Augsburg edition of the Fables of Aesop, translated from Latin into German by Heinrich Steinhöwel in 1479. It is illustrated with 208 woodcuts, cut in the Augsburg style, which is characterized by thick contour lines outlining the figures, a reliance on white space rather than highly detailed embellishment to decorate the image, and little background or landscape to create perspective.

The publishing history of the Fables is extensive. Over 150 separate editions were printed between 1465 and 1501. Little is known of Aesop's life, but he is believed to have been a slave who lived during the sixth century BC. He himself did not write down the fables. They became part of the oral tradition of storytelling and were eventually recorded by his contemporaries. The uncomplicated moral lessons that are related in Aesop's Fables have captured the imagination of generations of artists, who have used his stories as a way to teach moral lessons to children of all cultures and nationalities.

The Life font is embedded in the MS Word document so it will show the illustrations and describe the event.
-----

The Fable Titles are shown in the font Postscript names.
Top

and received this message:

Welcome to the NEW DATAFILEHOST.COM!


We're sorry for the inconvenience but the page that you are looking for has been removed or no longer exists!

Nothing stays the same over 4 years on the Internet as you know.
New Links:

The links are expired again

I've uploaded the font to the forum: