Hi there,
I have been working on creating this font from my writing for months and finally feel confident enough to share it.

I have struggled a lot especially after scanning the writing, splitting it up into individual fonts and then finding that the letters don't have the same weight when put into font creator.

I would welcome any comments and meanwhile will carry on trying to complete the font.

Not bad at all for a first attempt. At first glance I noticed some spacing issues, which is one of the hardest things to get right. Copy/paste the text from Kern King Part 2 into the font test window to see where the problems lie.

I downloaded this font and tried it in the test area of FontCreator and also in Serif PagePlus and found it extremely stylish and elegant.

One piece of text that I used in PagePlus was my punctuation test, at 24 point.

“I saw Jane at the supermarket, in the fruit section: she said ‘Is John still researching?’ and bought a punnet of reddish-orange apricots; then she bought some dates!” said Edith.

The result was good, though there are a few points that I would like to mention since you asked for comments. These are intended as fine tuning of an already very good font.

The hyphen seems too low. The hyphen also seems to go down from left to right. That is a design decision that it is for you to make. I am not saying that what I think is better than your design.

The line that is for a dot on the lowercase i seems too thin. A line rather than a dot is fine, indeed good. Howcver, to me it seems too thin. Again, that is a design decision that it is for you to make. I am not saying that what I think is better than your design.

The font has an irregularity that is good. It makes it look like handwriting.

I like the kerning. In PagePlus It did Ja in Jane and Jo in John very elegantly.

A decision that you need to make when you draw the digits is whether to make them as modern lining digits or as old-fashioned digits with some taller than others and some going below the line. Again, that is a design decision that it is for you as the font designer to make.

One thing that I will suggest, if I may, is that while you are drawing the artwork, the drawing of some alternate versions of some capital letters and of some lowercase letters is worth considering. Even if you do not use them until later it would be good to draw them all at the same session. For example an e with a flourish that could be used at the end of the last line of a poem.

Also a few ligature glyphs such as ct and st and ff would be interesting.

I did notice that the font is flagged as an Italic, yet there is no Regular.

However, I am not sure on that point so maybe someone else can comment on that feature please.

I hope that Bhikkhu Pesala does not mind me saying that I saw the E in the name Edith in the punctuation test text that I used and I thought that the E was very stylish.

Please know that I was writing my response and posted it before reading Bhikkhu Pesala's comment.

However, the design of the E is a matter for you. If you do change it, may I suggest that you do not discard the original glyph yet keep it as an alternate glyph for a letter E please. At the present time you could map it into the Private Use Area and at a later time perhaps make it as an OpenType alternate glyph.

Being picky in random order:

1. Your design of the single (apostrophe) and double quotes (quotation mark) has made them "directional" -- that is, they curve like a right parenthesis -- ). They should be straight up and down so they can be used either on left or right of the adjacent text.

2. The single/double quotes are positioned at 1400 units whereas the quote left/quote right are at 1016 units. While they are probably never used together it appears that 1016 is too low and should be raised.

3. I believe the Space character at 508 units is too narrow for your font. It should be widened to something like 1000 units. This defines word spacing and if too small the words get too tight.

The following shows the apostrophes and alignment and word spacing in the current version of the font:

4. I don't particularly mind the E but believe it should look more like the F as BP said..

5. I believe you should redraw all letters in your style -- especially those which clearly "don't fit" from about the dotless i through the faction symbol. There is little more jarring than an inconsistency in design. Some of the early font software automatically put mathematical symbols into fonts as "perfectly-formed, regular weight" and made the whole thing look very amateurish. Far better to have been empty than wrong. Also, it's probably best to use a more traditional NotDef shape to show the casual user something's awry.

And a personal peeve, when you get done, please delete all the unused glyphs: Edit/Select Incomplete, Delete. This cleans up the finished font and allows the NotDef character to work properly.

6. Doesn't Matter: You apparently have auto kerned the font which has resulted in over 4200 kern pairs. My opinion is that too many of these are illogical and should be deleted to clean up that measure.
Top

Another point about kerning — not all applications support it, and users may disable it, so do what you can with the glyph side-bearings to adjust the spacing before adding any kerning values. It may not be possible to get it looking perfect without kerning, but its worth fixing because kerning takes a lot more time and effort if the side-bearings are wrong, and if you fix the side-bearings later you will have to redo the kerning.

Very Nice!
I like to use "From Any To Zanily" In the Test Font window to see how the caps look in words.
Yellow ellipses appear to have too much space. 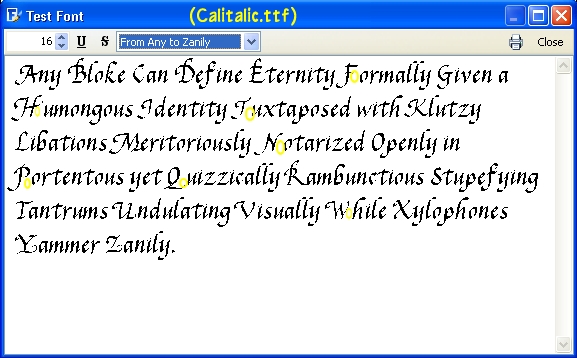 While in a glyph window, Use View / Toolbars / Comparison To make adjustments by moving the right bearing. 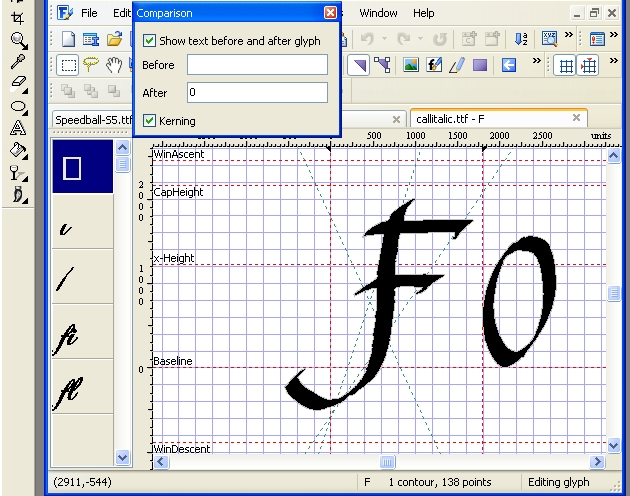 I would drop the R leg below the line so following letters could be moved closer, but that is just me.
Aut nunc aut nunquam
Top

I just want to say thank you to everyone for the comments about callitalic. I welcome them as they are both supportive and useful. Although I have read the manual several times, it is difficult to take all the information in.

What you have given me is specific and now I will use all the points made to improve and hopefully complete the font, after which I will post it again to ask for further opinions.