I have tested the font in monochrome in WordPad on the Windows xp system that I am using.

I would be interested to know what this font produces when used in Windows 8.1 in various packages please.

Can anyone get the glyph mapped at U+E421 to display with transparency in the layer that represents the glass please?

Other comments are also welcome.

The font includes several of the features mentioned in the following thread.

The font also includes glyphs, no meaning specified, for magenta, blue, cyan, black and white at U+E404 through to U+E408 respectively.

The colour keypad is at U+E420

The experimental on-screen colour keyboard is at U+E430

At U+E421 is a picture that has several layers that are opaque and one layer that has the following palette colour.

In the picture the layer represents a large glass window panel at the entrance to an art gallery.

I've made some screenshots from within Internet Explorer 11 running on Windows 8.1 Preview: 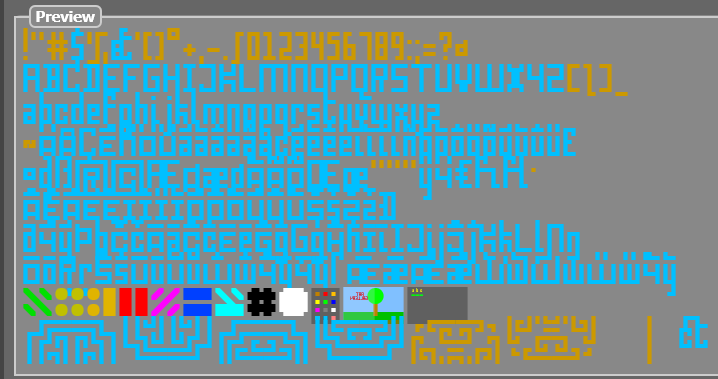 It appears that the way that the transparency works can be expressed as follows.

Suppose that the opaque colour below the partly transparent layer is expressed as a point in RGB space.

Suppose that the colour part of the partly transparent colour is expressed as a point in RGB space.

That explains why the tree trunk became lighter behind the glass.

The changes are as follows.

The colour of the glass is now as follows.

I am thinking that this will move each of the four colours behind the glass towards black, though not black in a paint sense, more as a colourless colour.

The other change is that the lettering is now blue. This is simply to assist in easy identification of which glyph is which in a display.