OK, I'm new at the font creation business, so bear that in mind--but offer whatever feedback you will. One of these I call "Engraved Nameplate" since it reminds me of white-on-black nameplates one found on machines, machine tools, control panels, etc. fifty or more years ago. The other is called "Quasi-Serif" which is approximately descriptive.

The stroke weights in Quasi Serif are the main issue. The period and comma in Engraved Nameplate are also way too heavy compared to the other glyphs.

Capitals need to be slightly heavier than lowercase, but not by too much.

One easy way to check for uniformity of stroke weights is to open one glyph that you think has the desired weight in the Glyph Edit Window, and use the Background Image Toolbar to copy it. Disable Outline Fills, then scroll through the font to check for glyphs that are too heavy or too light. Below, I have copied the capital I glyph to the background image, then scrolled left to the capital H glyph. You can see that they match for both stroke weight and left side-bearing. 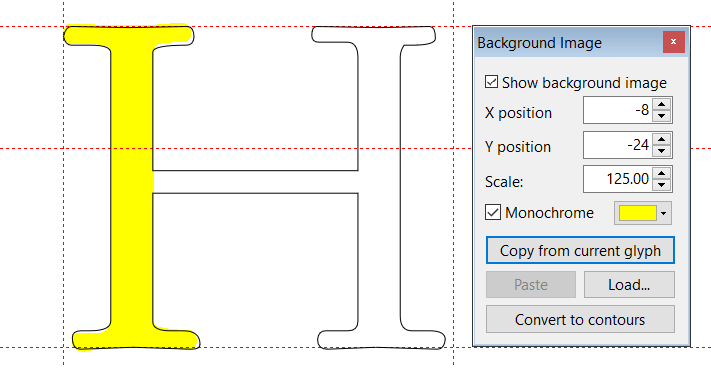 The lowercase glyphs need to match each other too, but are slightly lighter than the capital glyphs. 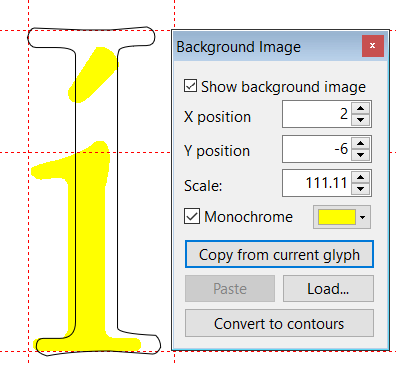 Once edited (bearing the above in mind), any suggestions where (what I think is) the finished product ought to be posted?
Top

1940LaSalle wrote:Once edited (bearing the above in mind), any suggestions where (what I think is) the finished product ought to be posted?

Deviant Art is a good site at http://www.deviantart.com/, you have to register for a free account or you can pay for a 'premium' account, I stuck with the free one http://pjmiller.deviantart.com/ .

If you want something specifically for fonts then Font Space is OK, it is at http://www.fontspace.com/ you have to register but it is free.
Top

The latter looks like a live one since I'm not exactly an artist. Thanks.
Top
Post Reply
5 posts • Page 1 of 1