The thread is entitled Proposal to add standardized variation sequences for chess notation.

There is a PDF (Portable Document Format) document as well.

Well I have tried to implement the proposal starting with a copy of my Quest text font and producing a Quest text 2017 font so as not to alter the original font.

Please know that the glyphs for U+FE00 and U+FE01 are my own design. I think that U+FE00 and U+FE01 may possibly be supposed to be zero width, but I made them as they are so that I could typeset the diagrams more easily and be able to test the font effectively. 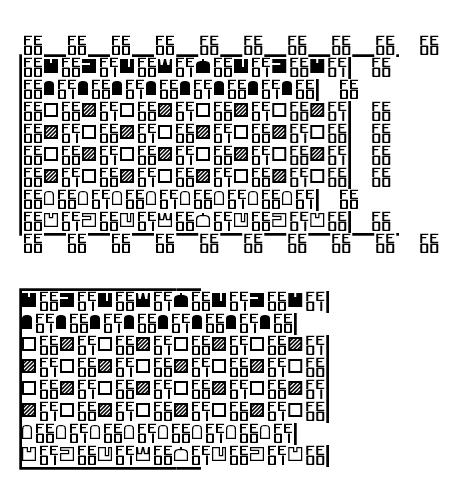 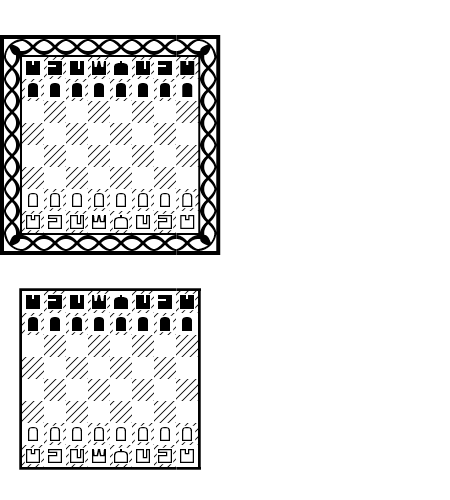 Here is the OpenType code that I used. I do not know whether liga is the correct table to use, but I used it as I knew that I was able to easily test the font in Serif PagePlus X7 if I used liga.

Please know that I am unsure as to whether the latn is the correct way to have made this font. I simply started with a copy of the OpenType code from a font that I made some time ago and carried on from there and it worked.

by William
An experiment.

I have the text for the above diagrams in the PagePlus X7 desktop publishing program on my computer.

The experiment is to copy the text from there and paste it twice into this web page, once in text, once in a code panel.

After that, to clear the clipboard on my computer by copying and pasting something entirely different elsewhere, then to return to this forum and try to copy and paste the text for the diagrams back to my computer, to establish if I can round-trip Unicode code for the diagrams.

Well, now to post and then to try the round-trip.

by William
Yes the experiment worked very well, at first, but there is an issue.

I logged off before I tried it so that my test was as an ordinary user of the forum.

It was interesting in that I pasted into PagePlus X7 then formatted to the Quest text 2017 font then switched on the liga substitution in PagePlus X7.

Later I tried, after pasting into PagePlus X7, switching on the liga substitution in PagePlus X7 and then formatted to the Quest text 2017 font and it still worked!

Yet pasting back here does not work, it seems to leave out the characters to get a new line. So although I had got the picture back it was not quite the same as the original.

So back to PagePlus X7 and I used View Special Characters and switched on paragraphs and punctuation indication.

I need to use the return key and the delete key at the end of each line so as to display a pilcrow sign and remove a sign like a right angle bend with an arrow pointing to the left.

So now it pastes in here.

So now I shall try to recover it again.

by William
Yes, still the same.

I can post the text here, I can copy it back, yet the copy, although it displays well is not quite the same.

I do not understand what is happening at the moment and so maybe this is an issue of how the lines need to be spaced when using the new format to typeset a chess diagram for interchange.

Does anybody have any ideas about this please?

William wrote:Here is the OpenType code that I used. I do not know whether liga is the correct table to use, but I used it as I knew that I was able to easily test the font in Serif PagePlus X7 if I used liga.

Although you could use other OpenType features, liga is probably the safest bet. Fonts such as Apple Sans Adjectives use liga, presumably so that they will perform reliably on web pages; modern browsers support features such as contextual ligatures, but older browsers only support standard ligatures.

by William
I have produced a typecase PDF document for the characters necessary for typesetting chess diagrams using this format.

by William
There is a discussion in the Unicode mailing list about variation selectors for use in transcribing Old Polish documents.

There are at present various posts in that thread, including one in a spin-off thread entitled:

I started with a copy of the chess font produced in 2017.

My intention was to test it in Serif PagePlus X7, a desktop publication program that supports (at least, some, I do not know how many in total) OpenType features, which I have used before to test fonts, then to post here and then to send a message to the gentleman who started the thread in the Unicode mailing list, with a copy to the Unicode mailing list and hoping that a desired encoding for Old Polish could be produced and that I could try to make a font.

However, there were problems with the testing. I wondered if it was the font but I looked through it and as the font worked sometimes in PagePlus X7 I thought that a font issue was less likely.

Today the problem is worse, but there is a peculiarity in that if I post text that does not work to the Serif forum, then after posting I copy and paste back into Serif PagePlus X7, the OpenType glyph substitution works well.

So it may well not be something to do with the font as such, but I thought that I would post here in the hope that some readers could please check the font and maybe try it out in some other applications.

The font is available from the following link.