Font Groups on 2 computers - Need to import to New computer

Font Groups on 2 computers - Need to import to New computer

Please help!
I have font groups on 2 computers. The first group is on a desktop I used a couple years ago, the second is on a desktop I used until yesterday. I had groups on the older computer set up - but couldn't figure out how to export the groups - or import them to the newer desktop - so I started over...but didn't finish categorizing everything - and also acquired tons of new fonts.

I just got a new laptop (that is AWESOME!!) and will be using this as my main computer. I don't have the time to set up all new groups again.

I need to know how to #1 - merge the groups I had on the old desktop to the new one.. then #2 take those groups and import them to my new laptop.
I am paralyzed without my fonts somewhat organized (I have close to 4k) and need to get this working ASAP.

I read a post about the groups being in "my documents" - but they aren't there. If someone would be so kind to post step by step instructions on how to do this in this post I would be forever grateful!!!

p.s. I tried running FMS config - but the option to restore is greyed out. I can see that I have a backup from 2013 - but have no idea what to do with it.

Re: Font Groups on 2 computers - Need to import to New compu

ok.. i am working on getting a backup from my most recent "old" computer - and am going to try installing it.
I got a message when I tried updating the middle desktop with the backup from the old desktop saying it would overwrite changes that were made to that copy of main type. I cancelled it because i was afraid I would lose the information from the middle computer.
Is there a way to merge two backups together to load onto my new laptop?
Top

Re: Font Groups on 2 computers - Need to import to New compu

No, you can't merge your font databases and/or vaults.

You can create a backup through FmsConfig, as available from Windows start menu -> High-Logic MainType

First stop the service on the Status tab to enable the backup options: 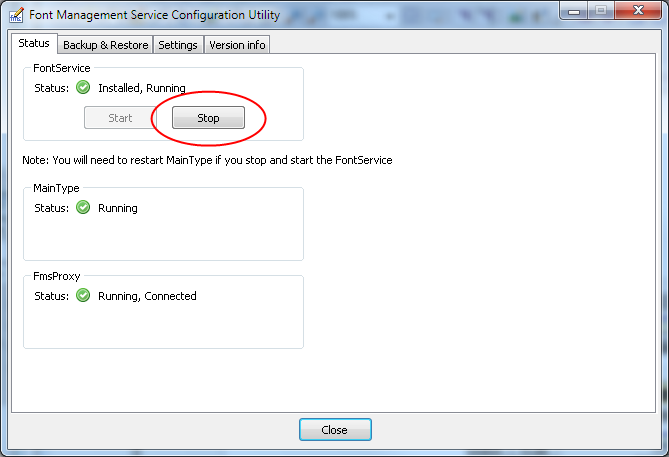 Next create the backup: 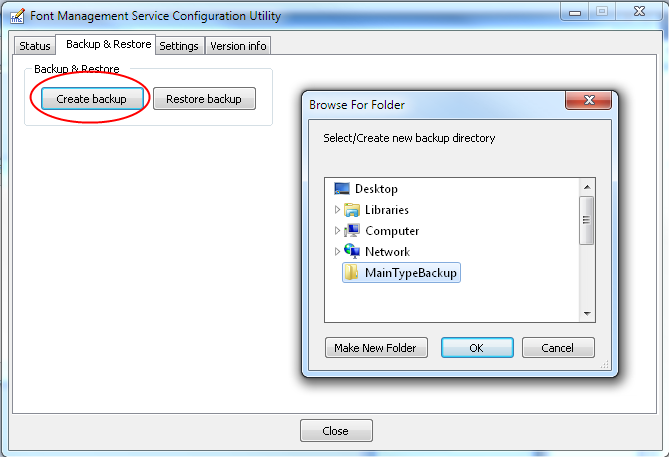