by Stonyjohn
Just like Mark321 I have been trying to get my head around the question of characters / glyphs. I still can't find any definitive explanation of the difference between them - I always thought the terms were interchangeable.
I found this statement on another topic: "You can click the "Unicode" toolbar icon to show all glyphs, but unfortunately you won't be able to copy and paste them, as glyphs are not equal to characters." So, that confirms there is difference, but doesn't answer the fundamental question: how are glyphs used? If glyphs cannot be used as text in the general sense (e.g. with MS Word), why are they there in the first place? As they aren't included in the Windows Character Map, those of us not using a third-party font manager will be completely unaware of their existence at all, prompting the question: how did the font designers mean them to be used?
While investigating this subject in more detail I have found more questions than answers. For instance: taking Linotype Palatino as an example, MT indicates that it has a total of 1063 characters; however the same font on the Windows Charater Map shows only 1052 (the same as the Libre Office charactrer map). Where did the other 11 come from? Also, at the top of the MT Characters panel is a drop-down list of 22 separate sections within this font, indicating e.g. "Basic Latin (95 of 128)". 128?? Where are the other 33? If all the "of" numbers are added together, the grand total is 2884! Please, someone explain what's going on.
Incidentally, there is mention of a section called "Private Use Area" or PUA. After scouring the MT screen and the Help and the User Manual I can find no mention of this. As I said - more questions than answers.
I'm sorry, Mark321, but I'm really trying here.
John

by Bhikkhu Pesala
Total noobs are welcome here, even if they are really trying.

A glyph may be mapped or unmapped to a Unicode code-point. If it is mapped the glyph is also a character, if it is unmapped, it is just a glyph (a shape).

The Unicode Range is split into hundreds of character sets for different languages. The Unicode Consortium has gradually added support for more languages over the years, by assigning character ranges to languages you and I have never heard of.

What you see in many fonts is just character sets for Latin scripts ABC, and not Burmese, Thai or CJK (Chinese, Japanese, and Korean, etc. Special fonts will have those ranges). Windows Arial covers a lot of ranges, but not all by a long way.

So, long story short, you can copy a glyph that is mapped (a character), but not one that is unmapped. However, you can copy it as an image. I copied this Qu ligature from Palatino using MainType. 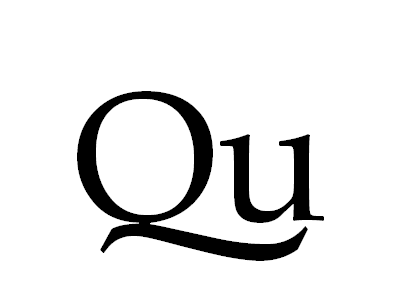 by Bhikkhu Pesala
Here is a slideshow of a preview of my font in FontCreator, showing the effect of enabling various OpenType features. The rocket is a coloured character, which is mapped to decimal code-point 128640 (1F680 hexadecimal) in the Unicode Character Set, Transport and Map Symbols. It has coloured glyph members that are unmapped, but which are used in the "rocket" character. OpenType Features illustrated below