by Bhikkhu Pesala
The font displays as Regular in other applications

by Erwin Denissen
We've been able to reproduce the issue, and will further investigate it.

It looks like Word doesn't recognize Caladea Bolt Italic, because it has an incorrect font subfamily name (Italic instead of the expected Bold Italic).

Uninstalling all but Regular solves the issue, so the font names are incorrect and lead to unexpected results. Better contact the font designer, so he can fix it.

by Leon Gauthier
Erwin, my little pea brain is having a tough time understanding the problem as you have stated it. I was able to confirm with FontCreator Pro version 11.5.0.2427 that the installed font file named caladea-bolditalic.ttf was identified internally as belonging to the subfamily Italic rather than Bold Italic. Each of the other three files were properly identified internally.

How this creates the misidentification demonstrated in MainType previously or in the file listing (shown below) when opening an installed file with FontCreator is beyond my comprehension.

However, I thought that I could rectify the situation by correcting the newly downloaded file and then uninstalling the existing installed files and installing the corrected file along with the other three all of which have the same creation dates. Thsi idea failed because Windows would not allow me to delete "protected system" files.

For what it is worth, I sent an email to the creator but I really do not expect any reply … after all, this font was created in 2013

by Leon Gauthier
Well well well, I was able to uninstall Caladea after all, using your MainType program … However, uninstalling all except the regular did not change the regular listing so I deleted that one also and then installed my corrected file along with the three other originals … all to no effect!

However, when Claldea Regular or Claldea Italic is selected, they both display the font name in italic

both display the font name in BoldItalic.

by Leon Gauthier
I was able to duplicate what Erwin reported: when I deleted all of the Caladea fonts except the Regular and then exited and restarted MainType, the Caladea Regular did indeed display as Regular.

However, after I re-installed only the Caladea Italic, both MainType and FontCreator again displayed both files as Italic. Windows previewed them correctly. Clearly, this has nothing to do with the Caladea BoldItalic font being mis-identified as Italic only … it is not even installed at this point.

It appears to me that somehow the Caladea Italic font is the culprit here but I can see nothing wrong with the file's properties. 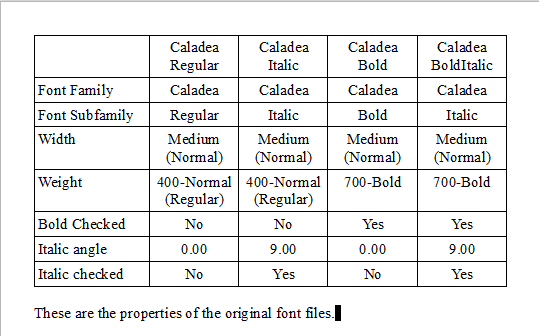 Not really believing that the Panose values had anything to do with this problem, I uninstalled the Italic font and the others all displayed correctly (as expected from previous testing). I then changed the Panose values in the Italic file to match those of the others and I re-installed it. . . . Shockingly, it worked. All of the files display properly in MainType and FontCreator's open installed font function.

In conclusion, the real problem was with the Italic font but that font as well as the BoldItalic font had to be corrected in order to fix this problem.
All times are UTC
Page 1 of 1
Powered by phpBB® Forum Software © phpBB Limited
https://www.phpbb.com/