A puzzle with a purpose

A puzzle with a purpose

Some readers may have read the thread in the Gallery forum about my experiments with Localizable Sentences expressed as Unicode characters.

I am adding some sentences and some glyphs to represent colours. For example, the following.

I have been testing the font and have produced the following graphic showing the fourteen glyphs in a random order. 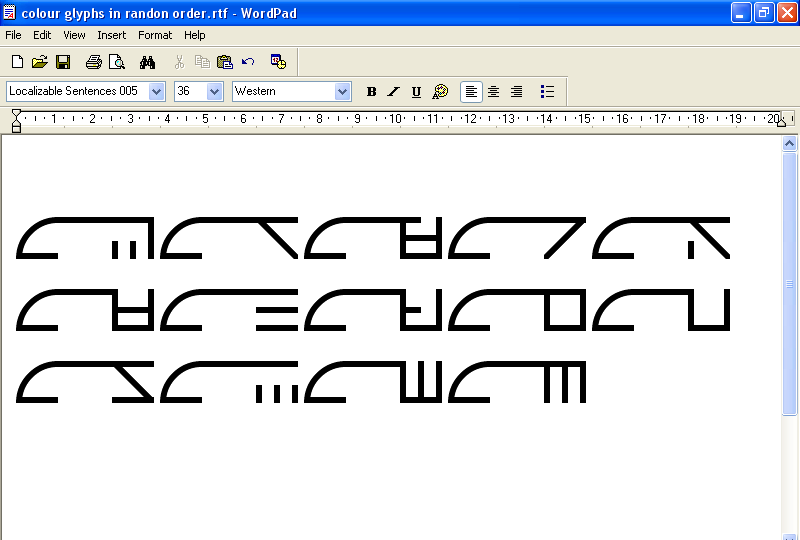 The puzzle is to try to deduce the order in which the glyphs representing the colours are displayed in the graphic.

I have tried to design the glyphs by using the line shadings used in the Petra Sancta method for depicting colours in old black and white books on heraldry, though that does not cover all of the colours used in this list of fourteen colours, though it does have some shadings to represent colours that I have not used.

Hopefully the puzzle will be of interest to some readers and will be fun to try to solve.

The puzzle also has a purpose in that I have tried to design the glyphs so that people already familiar with the Petra Sancta method will hopefully have an intuitive feel for which colour is being represented. So I am wondering whether I have been successful.

Readers are invited to post their suggested solutions to the problem together with any comments that they choose to make as to the ease or difficulty of deciding which glyph is intended to represent which colour.

I shall try to add a spoiler protector at the end of this post so that if people do post solutions then the solutions will not be displayed to someone wishing to try the puzzle without first reading the solution!

Re: A puzzle with a purpose

Here are some links to the Petra Sancta system of indicating colours using monochrome lines.

As it happens I did not know of these two pages when I produced my designs.

Some readers of the first page mentioned above may like to know that if one downloads the full resolution version of the diagram of the more complicated hatchings to local storage and then opens that file in Paint and one then displays the image at 8x magnification, then the detailed design of those more complicated hatchings is displayed on-screen.

I found that the hatching for water-colour was amongst several that I did not know before.

Re: A puzzle with a purpose

The solution to the puzzle is now available in the following thread.