Between snow shoveling bouts this morning (getting ready for the 50 degree temperature drop across the nation predicted for tomorrow, the first day of February 2011) I decided to fiddle around with an old project, a new simpler version of PANOSE.

I named it "EyeSort." To get it out of Panose territory but use the Panose locations in the fonts I've started this with:
A. Text, B. Hand, C. Decorated, D. Symbol.
For me, the "Panose 0 = Any" and "1 = No assigned font is similar" seem redundant, so here 0 = Not sorted or assigned.

A. Text: I re-ordered Text fonts from simplest to most complex. 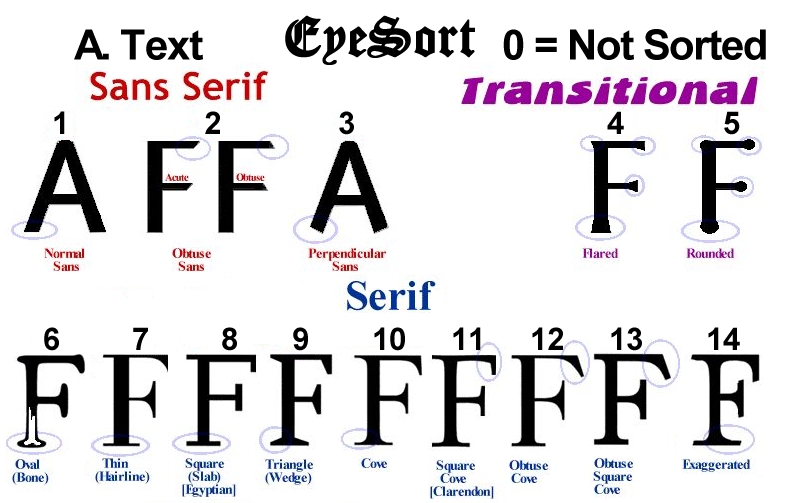 B. Hand: Freeing up the number 1 allowed me to add Pencil to the tool list. 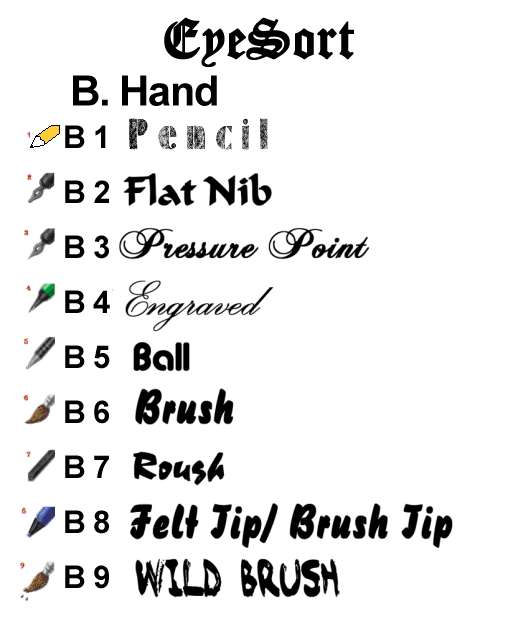 C. Decorated (would Fancy be better? Perhaps Derivative?) There are problems here. In my mind, they are ALL derivatives.
I would like to see the succeeding numbers being the number of the font style it is derived from. 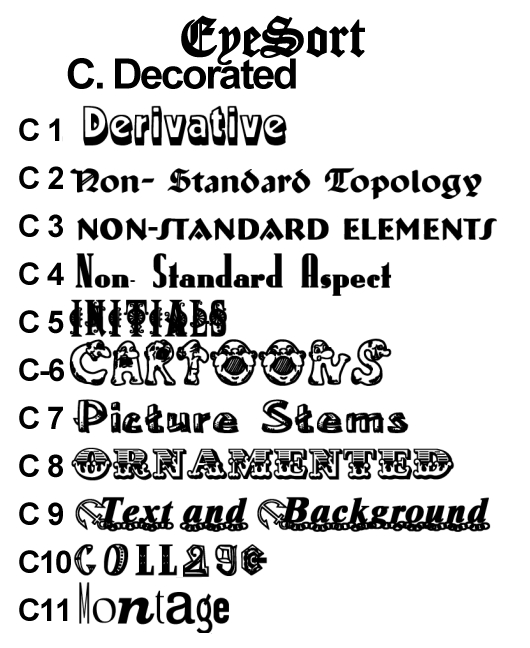 May I suggest the following additions for consideration please.

This would mean that any font that was found not able to be classified otherwise either fully or partially could be included in a list of fonts and their EyeSort classification as using Z or 99 or both.

The Z is a good suggestion. E could also be used, but perhaps E, F,G ... should be reserved for Seasonal, National, Sports or whatever strikes the fancy of a collector. We could each make up our own scheme. After all,

In their Introduction, Monotype states:
Hewlett-Packard does not restrict the use of PANOSE Classification Numbers in typeface products developed by third parties.

Somewhere in this I want to keep the Panose third digit:

The Z is a good suggestion. E could also be used, but perhaps E, F,G ... should be reserved for Seasonal, National, Sports or whatever strikes the fancy of a collector. We could each make up our own scheme.

Thank you. The idea for Z rather than E was so that you, as originator of EyeSort, could have space to extend the EyeSort system by using E and so on if you wished. Likewise with the 99 feature.


Dave Crosby wrote:
After all,

In their Introduction, Monotype states:
Hewlett-Packard does not restrict the use of PANOSE Classification Numbers in typeface products developed by third parties.


Somewhere in this I want to keep the Panose third digit:

Do you think that using lowercase letters for what Panose has as the third digit would help?

So for Panose third digit of 2 through to 11, one would use b through to k.

The reason that a lowercase p is suggested is because I once, long ago, devised a way of expressing hexadecimal characters as 16 letters and I used a for 1, b for 2 and so on, which gave o for 15, so I used p for 0 so that it could all be produced on a keyboard and handled as ordinary text and the last four bits of the character code gave the hexadecimal value.

I suppose that a lowercase z would only be useful in this context if a typeface weight could be "other", though, at the moment, I cannot think how it could be, because typeface weight is quantitative whereas typeface family and typeface tool are qualitative so there could, in principle, be an "other" for them.

I like the EyeSort system. It is straightforward to use and the visual guide helps to make a decision on how to classify a font.

I have been trying to classify two of my fonts using EyeSort.

The fonts are those used in the pdf attached in the following post.

The main text is in Gallery Plus. It is B8 as a handwritten font and something like A10 for its effect. What should be used? Or should there be another classification of a capital letter for "a handwritten font in the style of a text font" with numbers for sans serif to various types of serif?

I don't want this to get complicated. That is a big Panose problem, too many "buckets" and too complicated making measurements.

I'm thinking
A. Text - Designed for legibility, What kind of serif.
B. Hand lettered, What kind of tool, flowing and non-flowing Script.
C. Derived; C1. Text, C2. Hand or Script, C3. Seasonal; with C31 Spring (Easter etc); C32 Summer; C33 Fall; C34 Winter.
If all the Winter fonts are in one pile you can fairly easily find the ONE needed at that moment.

Names or foundry's, forget it.