by Alfred
According to the information on the 'Legal' tab in the Font Properties dialog in FontCreator, the Morpheus font from Kiwi Media is 'Installable', so I was surprised to find that it doesn't display correctly in Internet Explorer when the TTF file is embedded in a web page using @font-face code. I then discovered that the 'Details' tab in Windows' Properties dialog shows the embeddability as 'Restricted', which is presumably how IE also sees it: unlike other browsers, IE always substitutes its default font if an embedded TTF font is not installable. 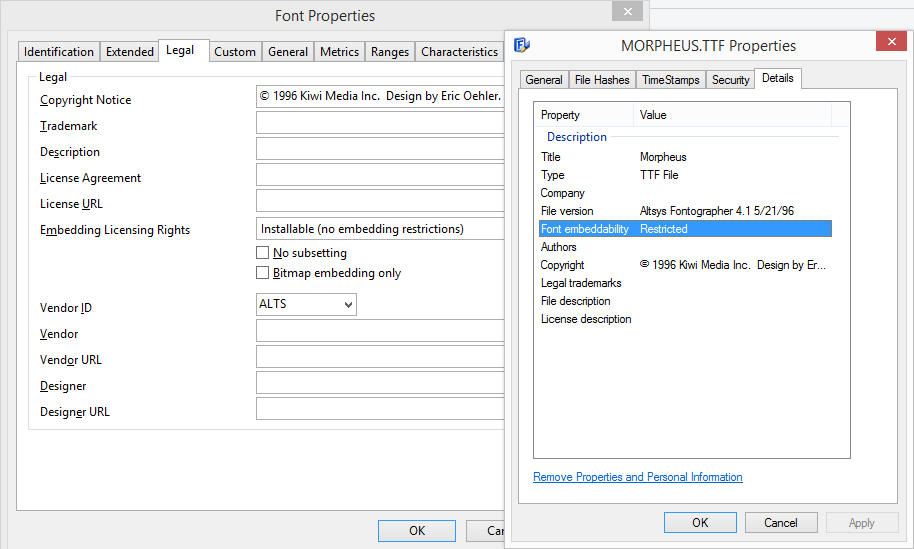 The font in question is available for free from Kiwi Media - Font Archive.

by Bhikkhu Pesala
I found that simply exporting the font from Font Creator set the flag as installable on the embedding flag.

by MikeW
Regardless of the text file, the font, as is often the case of those older TTF fonts, has mangled table entries. I believe the embed field as mentioned is actually not set to restricted but because the info is mangled, Windows errors to Restricted. Even the MS tool for changing TTF properties sees the value of that embed field as Installable, which is what it defaults to when there are broken table entires. 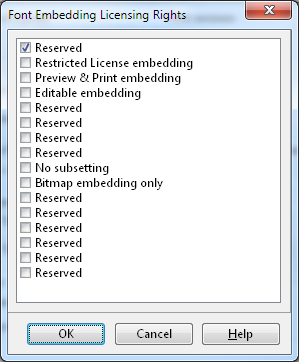 The included readme file unfortunately doesn't allow you to modify the font without express permission from Kiwi Media. So the best you can do is contact the font designer Eric Oehler.

by Alfred
Thank you all for your helpful input.
All times are UTC
Page 1 of 1
Powered by phpBB® Forum Software © phpBB Limited
https://www.phpbb.com/