by Erwin Denissen
I've received feedback from beta testers, that I want to share.


Beta Tester wrote:The template is good, but the . and , are pretty tiny. My eyes are good but some people might have a hard time telling which is
which.

Would it help, if a completed template can be printed as well?

I like the idea of a Partially (punctuation, possibly numbers) completed template for lazy people like me. Then I only have to do my abc's.
by Dick Pape
I see that Committee's in session again ... Let's use Comic Sans it's more like hand writing.
by Bhikkhu Pesala
Nothing wrong with Comic Sans, but it doesn't solve the problem. A larger font size for punctuation only might.

I think there is room to write:

colon semicolon period and comma.
by Erwin Denissen
When I use Verdana I have to use font size 8 to make it fit into the caption. Arial with font size 9 has slightly larger characters.

I like the a from Comic Sans MS, as that's how I write the letter myself.

However, the . , : and ; look far better with Verdana...
by Bhikkhu Pesala
The difference is in the default line-spacing at 9pt

Try setting a fixed line-spacing of 10 points, then you should be able to use Verdana Bold 9 point. That works on my PagePlus template. You can also reduce the row margins to zero.

Do I have to draw 5 -?- symbols for my font to work well? What am I supposed to do with those slots?

And does my whole character have to fit within the guideline hash marks, or can the lower parts of descending letters drop below the 4th mark in the grid? I have an empty template here but I'm not sure how to fill it!

(off to test my noobie betatester hypotheses)
by Bhikkhu Pesala
The five - ? - grid squares haven't been allocated to characters yet.

The short, horizontal lines are a visual guide only for Ascender, CapHeight, xHeight, Baseline, and Descender. 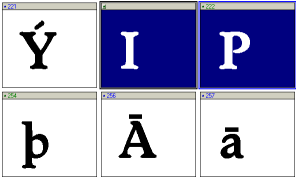 You can draw anywhere within the grid squares. Anything touching the grid lines, will be cropped.
by metalfoot
I knew that, but there's nothing in the docs saying that. As I said, I'm being Mr. Noobie Betatester here and I tried a sample font "not knowing" that to see how the program handled it. It was an interesting experiment.
by Erwin Denissen
metalfoot,

Thanks for your excellent answers. I'll try to update the "Quick Start" tutorial early next week.
All times are UTC
Page 1 of 1
Powered by phpBB® Forum Software © phpBB Limited
https://www.phpbb.com/