Some readers may know already that Microsoft is extending OpenType so as to support colour fonts.

I have been thinking about whether it would be possible for a future version of Scanahand to produce such OpenType colour fonts.

Suppose as an example that the font to be produced is to have blue letters with green holly leaves, red holly berries and yellow spirals.

Those are the palette colours for the font.

Please note that four colours is here an example, one of the characters in the Microsoft Segoe UI Emoji example font, the Confetti ball, has eleven colours in the colour version, thus having twelve glyphs in the font for the Confetti ball.

However, Scanahand would not like yellow in a scan. So the artwork could be drawn in blue, green, red and black.

So how could one inform Scanahand of the input colours and the output colours?

Suppose that, for example, there were a version of the Basic and Extended Characters template that were for four colours.

For this discussion, please consider a landscape box the size of the box surrounding the printed letter A on the template to be called a notebox.

Suppose that in the "Extended Characters template 4 colours" template there were two rows each of four noteboxes, perhaps in the main header area by moving the existing text up a small distance.

The idea is that from those noteboxes, Scanahand could gather the colour information needed.

Scanahand would then need to process each glyph of the artwork to produce five glyphs for the font, namely a default glyph and four colour glyphs, one for each colour.

This raises an issue that need not necessarily be a problem, but it is worth considering.

The issue is of what the default glyph might be.

Suppose that in the artwork the items in different colours do not overlap: then there may well not be a problem.

However, suppose that in the artwork the items in different colours do overlap, then there might be a problem, depending upon the design.

So does the Template Editor need to have an option to specify two cells for each character, one for a default glyph and one for a colour glyph?

Such an option would make templates bigger when the option were used, yet would provide maximum flexibility.

I mentioned earlier that in the Microsoft Segoe UI Emoji example font, the Confetti ball has eleven colours in the colour version.

So it seems to me a good idea that Scanahand would be able to produce an eleven-colour colour glyph if that were possible due to possible problems of colour separation.

Anyway, just some thoughts while we wait for the specification for colour fonts to become published.

I know this is a old post you had made and I don't know at what stage your at however I've been over looking at the options what I've been doing is using a lightbox to overlap same sheets so that I can just draw the colored parts seperately and then just do the rest manualy. What I've figured already that works the best is using the main colors so that the color reduction is minimal such as C M Y K R G B W which gives you 7 layers to work with (I agree yellow might be problamatic but a dirty yellow such as the one's in the smilies shouldn't cause headaches). Just take a look at colored QR barcodes on how they work might be a great start.

Elsewise the only way you could go at it is taking each square as a image then asking the user max colors used (Example 16) so that you can quantum the image then use something that would split the layers (I've used imagemagick) run Potrace for example on each frame then re-add the colors of each layer to import into the font under a postscript format or another.

The key is really in the max colors for the splits that I've found more than 256 and well you're just asking for trouble, right now I was overlooking some Optical Mark Recognition code to see if I couldn't at least pull off the scan part like your software for each square then break down the image from there.

I've mastered all the steps except the process of scanner to cropped file as you can see from my post in the FontCreator - Discussion under viewtopic.php?f=8&t=5148.

Heck I'd love to get Scanahand in color this way like I use it now on 4 square on a page for parents to keep artworks of their kids or to make designs for coloring books so I'm all up to assist in brainstorming.

P.S: On a crazy note should someone want to make the whole unicode as a scanahand would the template file take the co-ordinates if I have the font to go with it? (What can I say I love pushing softwares to their limits) as I know it would take 600 pages.
Top

Sorry I thought you we're part of staff, but same goes to the staff a colored scanahand using OMR type settings could work either way scanahand as is works like a charm.

ShawnDion wrote:What I've figured already that works the best is using the main colors so that the color reduction is minimal such as C M Y K R G B W which gives you 7 layers to work with

For the scanner if you use the distinct colors such as Blue Red Green Black Cyan Magenta Yellow (darker one not the pale) and good ol black (and white for seperations) most scanners will work fine for reading theses as they have a unique color id. (I'm not using them as a mix sorry for the confusion)

edit: I wasn't too clear in my first way of saying it here's a better idea of why theses colors work best as you can see it's either 0 or 255 like binary so for nearest color match this works.

Here's a example of a colored barcode theses would be the colors I'd use http://fileformats.archiveteam.org/wiki ... truct_Code should I be wanting something not too complicated for the scanner.

Best way to test it is simple using inkscape and telling it you have a max of 7 colors and see what results you get when using the trace. (I use Color Quantizer http://x128.ho.ua/color-quantizer.html to drop the colors)

If I had more knowledge in regards to scanning and cropping the actual squares I could figure out how to process the actual image to get them into a format that could be used. (Been doing it manualy and the results I can't complain)

I'll do some tests this week and see what results I can get you I'll go to the store and purchase some colored crayons that match the colors in question and break down the steps maybe someone will figure out on how to combine all the steps to avoid doing this manualy. I'll keep you posted with the results.

Thanks for the clarification, Shawn. I think we're on the same page now!

Your going to owe me sleep on this one =) I just figured out that what I could do is split the layers keep the black and another color to make each individual glyph as long as I don't use black for the inside drawings (Your the one who game me the idea when you asked your question about the 2 types of color formats) I can split the form and one of the colors into a Font 1 of X colors layer then I just need to open insert the glyph layers together and it seems to work. I'll fine tune the process and make a guide but I think this might be useful for some (Even if you take colors that are not the ones you want you can always change the palette afterwards)

Attached is a example of split layers I'm working on to see how it can be done. 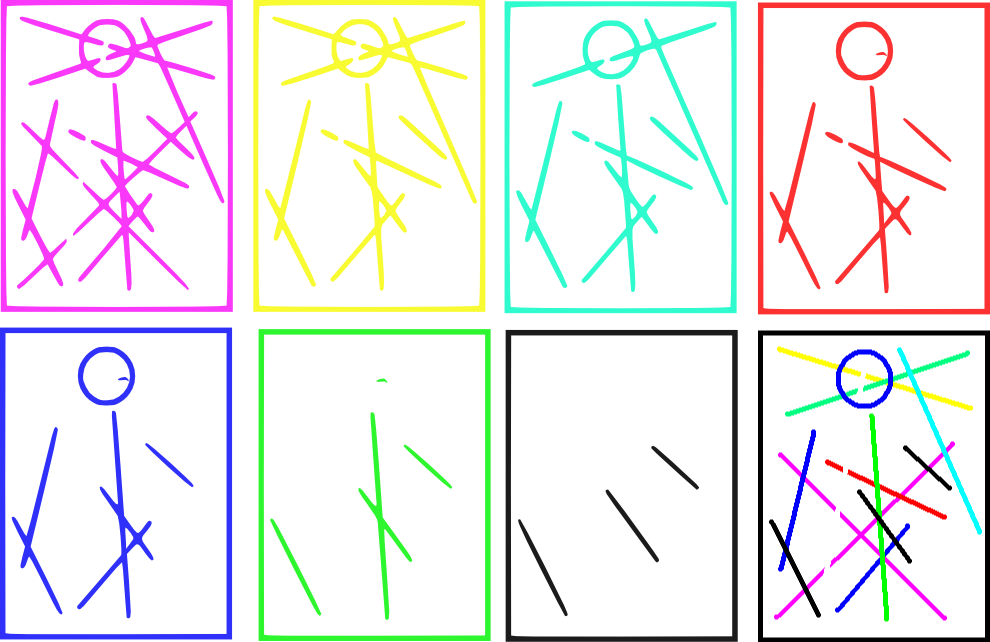 I'm looking for a svg expert, anyone here know how to subtract areas that are covered by another layer? (Tool, Plugin, etc) if you look at my previous post the tool I use does a weird layer splt to compose the image layer and I'd like to figure out on how to remove the redundant information as I want to build a tool to give to the HL community to make colored layers but I don't like sloppy code that wastes space when not needed. I'm sure I could shrink my font size by 80% but reconverting to raster and negating the differences would lose alot of the details.

On a side note I figured that should scanahand ever support color the form would need to be like a lotto ballot with the identification marks to align everything.
Top
Post Reply
8 posts • Page 1 of 1

Return to “Scanahand - Requests and Enhancements”