I'm playing with the FontCreator demo right now, and I'm wondering (I know it must be in the manual somewhere) how to change a straight line to a curved one. With Fontographer, which I'm used to, you just position the cursor over the line, press a mouse button, and pull the line in the direction you want. But how with FontCreator...?
Top

Re: converting straight to cuved lines

There are several ways to achieve this. By playing with them all, you can decide what works best in a particular situation.

In point mode change one point from on-curve to off-curve. If the contour doesn't contain a point in the area, then first add a point, and then change it to off-curve.

Alternatively add an ellipse contour, and then use the merge feature to join the two contours.
Erwin Denissen
High-Logic
Proven Font Technology
Top 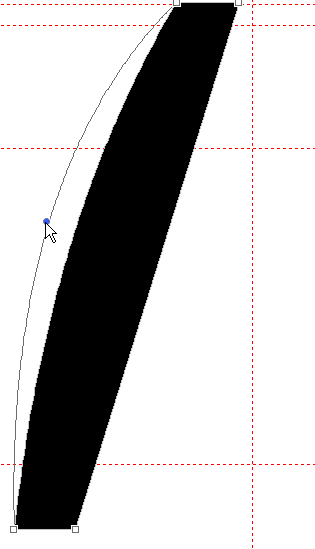 See also this post in the Tip of the Day Tutorial Thread:

After more effort, I'm still hung up. How do I add a point? I select Insert/Contour, then click Apply on the menu that appears on the screen. I move the cursor where I want to add the point and right click it and a contour (or point?) appears. But when I then try to get out of insert mode, I can't do so without adding more points (since they're all connected with straight lines) until I connect them all together. And the point of this is to create a curved line; all the lines are straight. (Yes, I tried the tutorial that comes with the program, and this is about as far as I've gotten there).
Top

Once you have inserted a contour with Apply, then you can add points to the existing contour, as described above. You can only add nodes in points mode. Select a node, type shortcuts a, then f, to add a node and change it to off-curve.