I notice that when I scale a diacritic, for example, if I flatten the grave accent above the A to 90% height, some applications will raise the glyph way above the WinAscent line. The composite looks fine in the edit window and the F8 preview window, but everything will mess up in the F5 test window and other applications, such as MS Word. If you look at the screen shot I've attached, the F8 preview window is to the left and the F5 test window is to the right (with the same text in both), and of course the edit window is in the background.

This doesn't happen if I leave the scaling alone and only adjust the position, but I do want to have slightly flattened diacritics for the upper case without having to do a "make simple" on them. 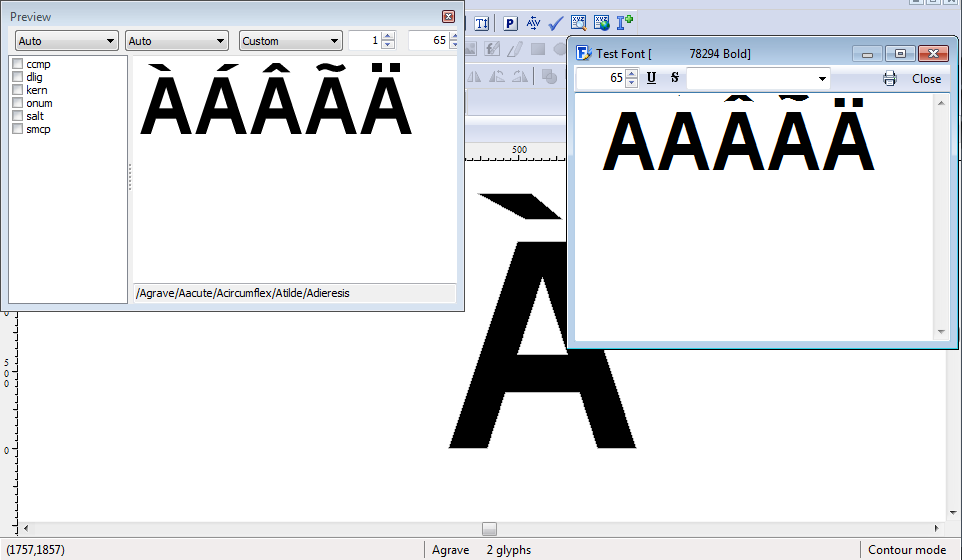 Yes. I have also seen this problem, which is why I never use glyph scaling on composites, except during the design process.

See the section on Low Profile Diacritics in the attached tutorial on Using Glyph Transformations. The glyph transform script will help you to create low profile diacritics in the Private Use Area. See also the appendix of that file to see how FontCreator uses the PUA for the Complete Composites feature.

If you design Low Profile Diacritics, Complete Composites will use them when generating composites for Uppercase Glyphs.

This is a fair enough workaround. I'll just create new versions of the diacritic marks in the PUA.

Though, shouldn't the failure of the software to provide correct WYSIWYG feedback be considered a bug?
Top

dyfsunctional wrote:This is a fair enough workaround. I'll just create new versions of the diacritic marks in the PUA.

Though, shouldn't the failure of the software to provide correct WYSIWYG feedback be considered a bug?

It's not a workaround. That's how fonts are usually designed if the designer wants different diacritics for upper/lowercase. Take a look at Gentium Basic, for example. Scaling of diacritics won't give ideal results even if some applications cannot deal with scaled glyphs.

FontCreator takes out a lot of the donkey work by automating the positioning of the diacritics with Complete Composites, and the Transform script aids with the design process, but the responsibility for designing the PUA diacritics correctly lies with the Font Designer.

I just ran into this problem with one of my fonts. I forgot to make the scaled glyphs simple after scaling them to make superscripts for Ordinals. Serif PagePlus X9 scaled them horizotnally, but did not scale the glyphs vertically, but displayed them as high as they would have been at 100% scale, and as a result the tops of the ascenders were clipped. The superscript n is fine, as I remembered to edit it properly. After scaling by 70%, superscripts are too light for the font, so you need to increase the stroke weight a bit too.