How to make Subtables

How to make Subtables

I read somewhere on your site that you recommend having subtables of 16000 kerns. I have a font with 51000 kerns. How do I make the subtables and why is this recommended?

by Erwin Denissen
I don't think we actually recommended this, but with over 15 years of forum posts, I'm not sure

Anyway professional font designers all have their own preferred range of kerning pairs. For Latin character sets some try to stay below 1000 kerning pairs while others stick to a couple of hundred class based kerning pairs. I suggest you analyse some fonts to see what comes close to what you prefer. 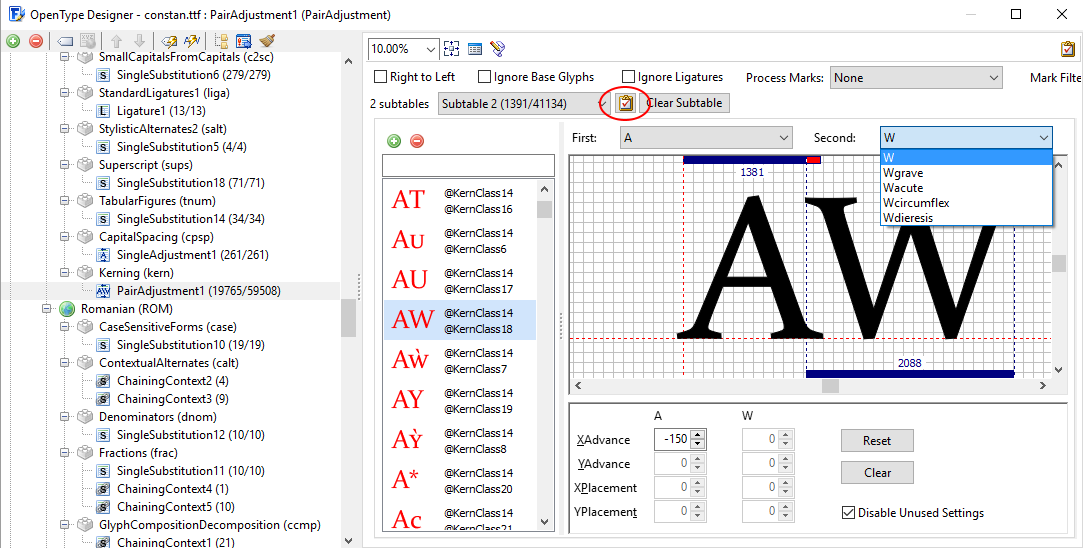 Erwin Denissen wrote:I don't think we actually recommended this, but with over 15 years of forum posts, I'm not sure

A quick search revealed this post, where 'someone' wrote that the maximum number of kerning pairs for a TrueType font is 10920. It was also noted that although the OpenType kern feature allows more than 10920 kerning pairs, that type of kerning won't work in a lot of software.

by Bhikkhu Pesala
Later versions of FontCreator seem to create the subtables automatically on exporting the OpenType fonts, so I never bother to do it in my font projects, which use class-based kerning to generate 20K or more kerning pairs.

I always include legacy kerning tables too, for the benefit of those applications that do not support GPOS kerning. However, the number of pairs will be limited as stated before.

by Jonne Haven
Erwin and company,

Thanks for your help. I would like to limit my subtables to 10000 kerns or less and I saw your illustration Erwin. I had already made the extra subtables, I just don't know how to populate them from Subtable 1 which holds all the kerns. I would like to know if this is possible in the code editor as this would be way easier than re-kerning the fonts...in fact it would be devasting if I had to rekern 50197 pairs.

On a possibly related note, Fonts made by Fontcreator do not print bold letters from MS Word 2013 or Word 2016. I know that it's capable as I've printed bold characters from other 'standard' fonts. I would like to be able to print my fonts in bold, please help.

Lastly my font says I have 50197 pairs, but after i install it and then import it back in, it shows only 50181 pairs. Are these possibly dupes?

Thanks ahead of time.

PS - Erwin I'll send you my font as well as a document with bold in it.

by Erwin Denissen
I think you should really consider using class based kerning as it is easier to maintain.

But yes, you can easily cut and paste part from one subtable into another.

by Jonne Haven
Erwin and company,

I'll have to get the hang of copying and pasting kerns into subtables.

I'm more concerned with my inability to print bold in fonts created by FontCreator. I'm using Word 2013 and it can print bold, I've tried with other fonts it just won't work for FontCreator fonts. I've uninstalled and reinstalled my printer drivers as well as Word, but it won't print bold straight from Word...or it prints the first 2 or 3 characters at the beginning of each line bold, then it goes back to normal.

Oh and about class based kerning, I would love if I could do that, but I've found whenever I try class based kerning on the second glyph of a pair of a kern, it does not kern at all, in fact it messes up the kerns not only in that class pair but all the following kerns with that include the second pair glyph.

I can only think then that I'm unable to export to Word or use the Test TTF if I use class based kerning on the second of a pair. I'd really like to be able to do this, as you said, it's much easier to maintain!

Any advice would be greatly appreciated!

by Erwin Denissen
Since we've made numerous improvements and fixes several OpenType feature related bugs; it might be worth to see if an exported font from FontCreator 10 does the trick. I'll send you one to test this.

First off, WOW thanks for doing all that work on my font. You've said you used some class based kerns, I've opened it in FontCreator but I don't see any classes. Did you intend for me to make classes and see if they work with your file? When you say you made some class based kerns, does this mean you are 'breaking classes' before you export to TTF? With 9.1 under certain circumstances (second glyph is a class) I MUST break the groups or things go haywire.

Is the software intended to be able to keep the class pairs intact and still export them functionally?

Also, like a broken record, I'm baffled by not being able to print bold. I have learned one thing though. It appears that the size of the font used in word works and represents the bold when the size is about 26 points or larger! Pretty much anything smaller than that will not bold print. Hope this helps...and Thanks for the extra effort...It's really important to me to be able to print in bold.

by Erwin Denissen
I added class based kerning by using the Kern Wizard. Then I deliberately changed a couple of pairs so it is easy to spot if kerning is enabled or not.

On export FontCreator will make sure the table is stored correctly. If it detects a glyph is in multiple classes, it will break class based kerning. We might be able to further improve this, so if you or others have suggestions, do let us know!

Can you print the faux bold font if you remove all OpenType features? 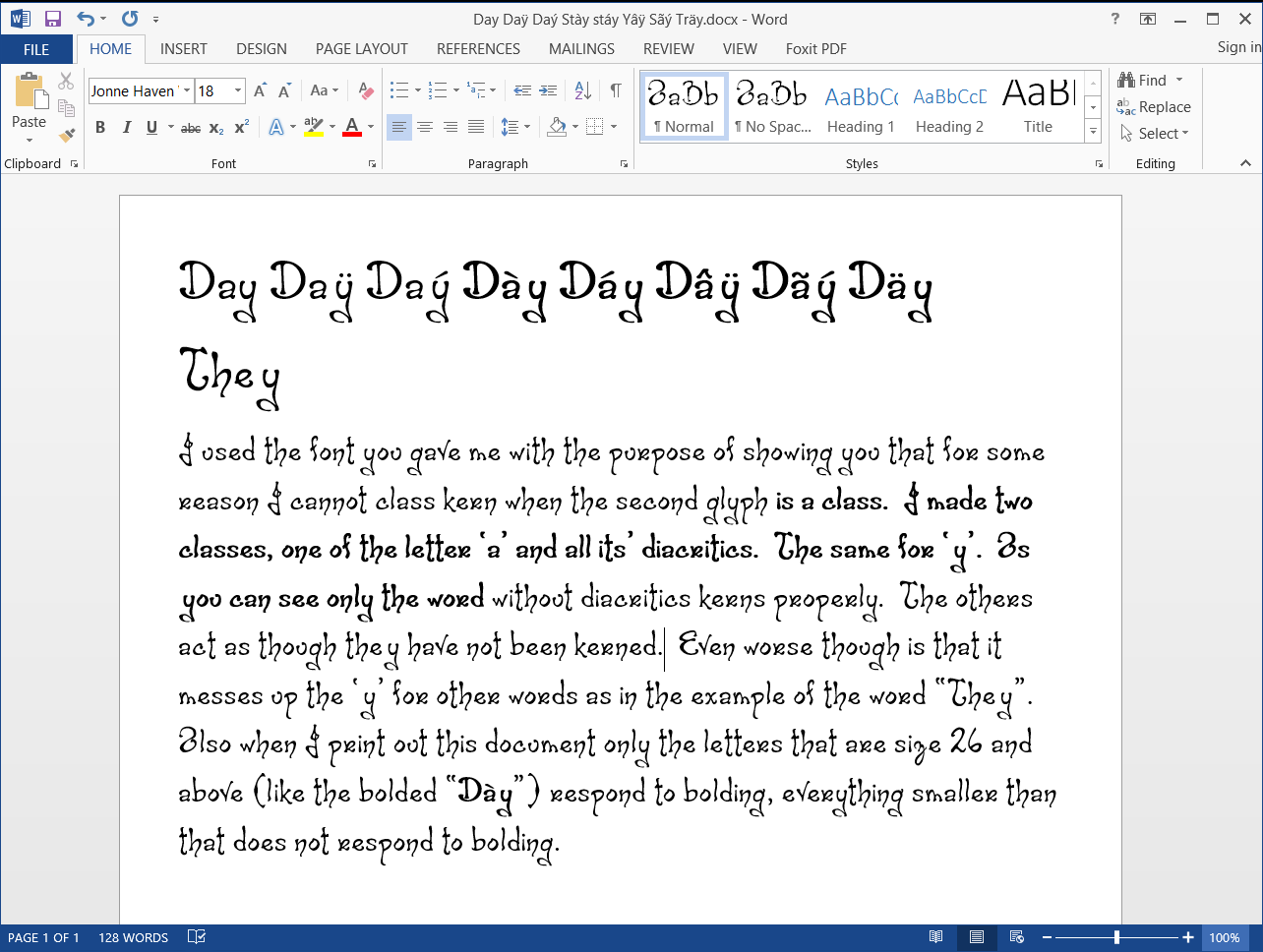 My woe's continue and I can't make heads or tails of it.

First the bolding. I tried what you said and printed out a font with no CALT features. It bolded small sizes once with no CALT features and it worked once more with CALT features, but then stopped working altogether. I could not reproduce those first two tries. It will print in bold if the font is 26 points or larger though.

I would really like to kern class based as I have all those diacritics, it would make my life a lot simpler. Here's a pic of my results, they speak for themselves.

I even went so far as to make subtables under 10000 kerns each, but that did not work either EVEN when I didn't use the second pair as a class. It's the worst kind of bug because it works on some combinations and not others. I also deleted all the classes but the diacritics because their was a warning that said Class a is overlapping with @aDiacritics...maybe that's a clue as to what's going on. So I'm completely baffled. One success was narrowing down when it will print in bold in Word. That number is 26...anything smaller and it will not bold.

Thanks for your swift replies, and let me know if there is anything you need.

Jonne
All times are UTC
Page 1 of 1