When you create a new font project with FontCreator, it creates a font with 236 glyphs, including one unmapped (.notdef) and 9 multi-mapped. Is there anything that the user can modify that controls the glyphs that are included, and the Unicode mappings?

By changing glyph names in glyphname.dat, it's obvious that characters are being inserted by Unicode point, and not glyphs with names that then get mapped to characters. I've looked at all the included transform scripts, and none insert exactly that set of characters. I also haven't found any way to insert a multi-mapped character, or to change a glyph mapping using a transform script, so I didn't think it was a transform script, but I had to check before posting.
Top

On starting a new font project, you can choose to include glyph outlines or not. The character set is hard-wired into FontCreator. 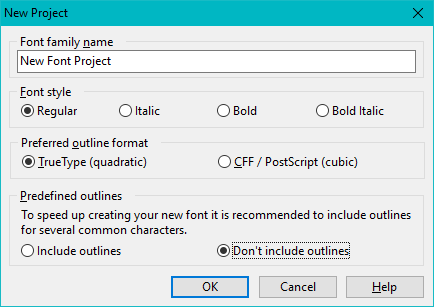 I don't know of a way to use Transform scripts to insert new characters that are multimapped.

The easy way would be to make your own font project with all of the glyphs mapped as you want, then save it. Just open that every time you want to start a new font project, and save it with a new name, edit the export settings, etc.

Since pretty much everything else about characters and glyphs are controlled by the config files, perhaps this could be changed to use a file too. I suspect XML would be the best, as it would allow listing of every glyph that should be inserted, plus the character mapping. Or, designating a "template" FontCreator project to use where a new project sets the same glyphs and character mappings, along with grid and other settings, but allows the user to still select the other options from the "File|New" dialog.


The easy way would be to make your own font project with all of the glyphs mapped as you want, then save it.

This sort of workaround is never a good solution. Basically, it means "File|New" is now a useless command. If I could then remove it from the menu, then maybe it would be OK.

Also, "File|New" has the advantage of being able to quickly set the sub-family and the outline format before any outlines are added. Using your workaround, I'd have to have two "base" projects saved if I wanted to include the default outlines and didn't always want to use the same outline format. You don't want to convert between PostScript and TrueType outlines if you can avoid it, because it can introduce errors.
Top

Looking a gift-horse in the mouth is never a good attitude.

You asked a question, and I answered it. Then I suggested a workaround.

The New Font option on the file menu is fine for most users. It does not become a useless command just because it does not suit your workflow.

Good luck finding help in the future. I have lots of other things to do with my free time. Of course, as a customer, you're entitled to technical support from High-Logic. I will leave it to Erwin to answer any further questions that you might have.
My Fonts • Reviews: MainType • Font Creator • Help • FC12 Pro + MT9.0 @ Win10 1909 build 18363.720
Top

The 'New Font' command in Font Creator is quite good, it gives you a limited set of glyphs but then you can very easily add more with the 'Insert characters ...' command and there are even scripts in the 'Transformation Wizard' to add the appropriate characters for many languages. If the particular set of characters you want isn't there it is very easy to write a transform script to insert just the characters you want.

The other option which Bhikkhu Pesala suggested is also a very good one, using an existing font and transforming it into what you want has many advantages (Cadman originally started out as Munson) for instance if starting out with one of your previous working fonts you know all the Open Type features are already done and working, the kerning will need to be re-done and many other things will need adjusting and editing but it is better than starting out with a blank canvas.

I personally see nothing wrong with the 'New Font' command as it is, it is meant as a starting point.
Top

PJMiller wrote: ↑
Sun Jul 29, 2018 9:49 am
using an existing font and transforming it into what you want has many advantages (Cadman originally started out as Munson) for instance if starting out with one of your previous working fonts you know all the Open Type features are already done and working, the kerning will need to be re-done and many other things will need adjusting and editing but it is better than starting out with a blank canvas.

True, and almost every program has the concept of "templates" that are what "File|New" uses for creation of a new document. All the Office apps, Adobe Illustrator, etc., all allow the user to not have to go through the "Open|Save As" to start, but instead allow them to save a file that is used as the template to create new documents. All of these programs allow multiple templates, and you really need that if you work with both TrueType and PostScript outlines...the conversion in FontCreator is good, but does introduce artifacts at times.
Top
Post Reply
6 posts • Page 1 of 1