Ok, one little step closer . . .
The problematic Ẽ must be added to UnicodeData.txt in TWO places. As it stands now, UnicodeData.txt is incomplete ... at least in the area of the Petite Caps. Blocks.txt also needs extensive revision in order to properly display the PUA ranges. The only sources I have found are old PDF tutorials which are not "up to date". Perhaps, CompositeData.xml can serve as a guide to the present configuration but, clearly, all three must be coordinated. What a job!
Top

Why do you need support for Ẽ and ẽ. These are included in Latin Extended Additional, to complete the character set and support Vietnamese, etc.

Unless you're creating a font for Vietnamese use, you don't need all of these glyphs. If you want to support Vietnamese with Petite or Small Capitals, you will need to add a lot more glyphs with stacking diacritics and low profile stacking diacritics for these additional glyphs too.
My Fonts • Reviews: MainType • Font Creator • Help • FC13 Pro + MT10.0 @ Win10 1909 build 18363.1082
Top

Why do you need support for Ẽ and ẽ. These are included in Latin Extended Additional, to complete the character set and support Vietnamese, etc.

That seems to be a strange question coming from a typography maven!!!

Ẽ, ẽ is a letter in which the tilde indicates a nasal vowel. It is the 5th letter in the Guaraní alphabet and widely used in other Amerindian languages in Brazil, such as Kaingang. It is also found in Umbundu and perhaps in related Bantu languages.

Also, it is used in Emiliano-Romagnolo, a Gallo-Italic language whose two dialects are Emilian and Romagnol, which are spoken in the Northern Italian region of Emilia-Romagna, parts of Lombardy, Umbria, Marche, Liguria, Piedmont, Veneto and Tuscany and San Marino.

By my count, the Latin script is used in over 800 languages!

This is all beside the point … mainly, I added the petite Ẽ because it and the ẽ were already present in the original font.

While it is true that I am unlikely to have need of Ẽ in my ordinary correspondence, that can also be said about nearly all of the accented Latin characters. The main reason I came to FontCreator in the first place was because there was no support for Sanskrit transliteration characters in e-readers and the only solution was to embed fonts containing those characters. I also had occasion to create characters with what could rightly be called stacked accents for another project. I am using this particular font to explore the intricacies of creating petite characters which I thought would be useful in identifying the speakers in a work consisting of dialogue between multiple speakers. And, yes, it is unlikely that the Ẽ will be needed for this project. However, it is a legitimate character and it is in this font so why not include it and learn how to add new glyphs as well?

PS My idea of using petite caps for the speaker names in multi-person dialogues has not won my wife's approval so, I may yet abandon the idea altogether.

In examining the various locations where Ẽ and ẽ are "defined", I found that in the UnicodeData.txt file, the entry for Ẽ as a petite capital seems to identify Ẽ as uppercase whereas the adjacent petite capital entries mark them as lowercase:

Could this possibly be the reason that the low profile accents are not being placed at the x-height level as they should be? I seem to recall that you said something to this effect, that petite capitals are treated as lowercase.
Top

Well, I tried it out ... I changed that UnicodeData.txt entry to:
E9DD; PETITE CAPS LATIN CAPITAL LETTER E WITH TILDE;Ll;0;L;;;;;N;;;;;
and when I ran the PCPU script, all of the accents were down to just above the x-height as they should be.
Yahooo!

I am going over the PCPU script in detail to see that it conforms to the small/petite capital code points in the CompositeData.xml. Apparently, code points were established for various non-letter characters,!$%&()?[]¡£¥¿, I suppose to be re-sized to match the small caps. In the original PCPU script, the Þ, SS and Ŋ were also included but they do not use code points in the small/petite reserve area (they use Titling Capital points). Not that it really matters I suppose but it is a bit untidy.

Talk about useless glyphs! Why on earth were these included? I question the inclusion of Œ and others as well but at least they have their own code points in the small/petite reserve.

Enlighten me here ... what was the rational behind the selection of which are in and which are out.
Top

I misspoke, the SS and the Ŋ do have small caps code points so they can stay, I guess

I am a little confused about the Latin Small Letter Sharp s (U+00DF) and the Latin Capital Letter Sharp S (U+1E9E). The Latin small letter sharp s generated by complete composites resembles the uppercase small sharp S and it has the height of a capital letter.
The attachment 223-02revised.png is no longer available
Mapped at 223, the first appearance in CompositeData is identified simply as <! – ẞ. When 223 is mapped to 7838, it is identified as <!-- German Capital Sharp s →. And lastly, when it is mapped to 59838 as a petite capital, it is identified as <!-- Small capital german dbls →.

This last reference is a throwback to the time when the capital version of the sharp s was a capital double S. This is confirmed by yet another mapping to 58223 where two 58115s are composited and identified as <!-- Small capital German s → and the 58115s are uppercase Ss.
The attachment 58223.png is no longer available
Bottom line: there is no Latin small letter sharp s … what you find @ code point 223 is the Latin capital letter sharp S. The double S capital version of the sharp s is obsolete. 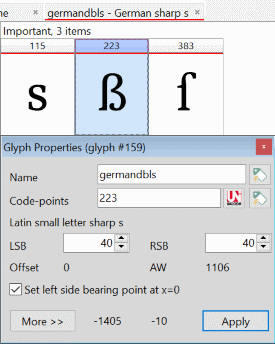 After looking at several examples of Small and Capital Sharp S in other fonts, I suppose that FontCreator's rendition could be either small or capital … whichever you think it is, the other one needs to be created in CompositeData.xml.