How do I create a ligature for a certain glyph / code-point?

How do I create a ligature for a certain glyph / code-point?

Amazing: FontCreator menus, help, manual... I cannot find any support about creating ligatures.
Can someone explain how to create a ligature for a certain glyph / code point?

Example: one single glyph (non-keyboard range) looks like the word "Goto"; I'd like to type "gO" in a text editor in order for those two letters automatically being replaced by the single glyph "Goto". I intend to create multiple ligatures based on two and three letter abbreviations, all with the second character in uppercase.

I have added a section to the tutorial on Adding OpenType Features about adding standard ligatures.

Because OpenType features do not require code-points, but work with glyph names, you don't need to map your non-standard ligatures to any code-point, but if you wish to be able to insert them in applications that do not support OpenType features, you will need to find an unused code-point in the Private Use Area or elsewhere.

The lookup table for your font would look something like this:

Definitely looks something to get familiar with and experiment with first.

I suspected the ligatures conversion thing would be a table-like feature because it makes so much sense. I read somewhere about a ligatures-related .dat file or whatever but somehow neither a saved FontCreator file nor an exported ttf comes with additional files. At least not where those files are custom stored to.

Despite your tutorial and the FC manual, it took me a while to find how to open the Open Type Designer! Started to think it was a pro feature stripped from the standard edition but finally, I found the corresponding button. At further investigation, I found it in the menus as well! Must have considered it irrelevant for ligature creation upon browsing through the menus earlier.

The more I sight-see in FontCreator as pretty much still a greenhorn the more I get the impression it's too pro for me! So many features one hardly can imagine being involved with just creating fonts: images showing upon keyboard button strokes

Creating some fonts was just intended to go between other tasks but now looking at it, it seems to involve a study first! Oh well, I started years ago, still plan to fix the files I once messed up and additionally like to implement the new idea of adding ligatures. Good work always takes time and this certainly is no exception!

Ironic that I get the help I need from someone far away, help related to software created and sold by someone living less than 100km away from where I live

Well, it looks like there's quite a bit of some self-education left based on your tutorial and first impression of 'pretty complex' but perhaps it's easier than it looks. Probably something for the weekend allowing me better/lengthier nights of sleep

Thanks again for the head-start, Bhikkhu, you dedicated PagePlus and FontCreator educator

If your font currently contains no OpenType Features, click the Code Editor Button to create some default features based on the existing glyphs in your font. 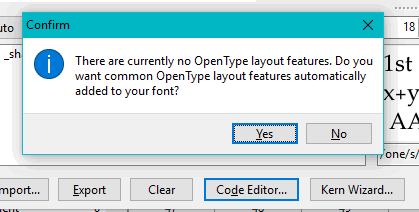 You can also Clear the existing features to start over. 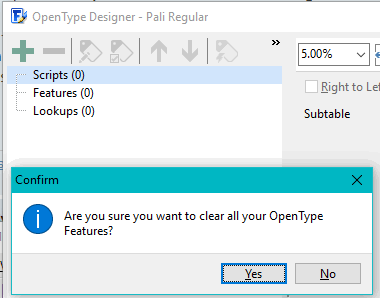