Psymon wrote: ↑
Mon Nov 26, 2018 12:05 pm
I seem to have this memory of having read somewhere that it's not a good idea to have any composite glyphs at all, that it can cause issues in some software. Or something. I'm really not sure what it was that I read, or why that was the case, I just recall reading that one should avoid composites.

Regular composites are great, but you should avoid scaled and rotated glyph members.


Psymon wrote: ↑
Mon Nov 26, 2018 12:05 pm
Um, when you say "as explained above," I'm not quite sure about the "how" of what you mean -- like, would I just drag those marks over to the left, beyond the LSB, basically? How do I know how far? Is it basically just guesswork, just eyeballing it, using my own imagination with each diacritic as to what "looks right" for positioning over most characters that they would go with (vowels, usually)?

Yes, move the marks to the left. IMHO "How far" is a matter of taste. You could try to fit them on an imaginary base character or just see if you can find a RSB that seems right to you.


Psymon wrote: ↑
Mon Nov 26, 2018 12:05 pm
On the other hand, I still don't know what use anyone would have for those with my fonts, since they aren't being used to create composites anyway -- I guess it's just nice to know, if only for possible future reference.

When one types a base character followed by a nonspacing mark, and the font doesn't contain the accompanying precomposed character, then it still looks okay by using this trick. Not perfect as the mark might fit perfectly above the e and o but the mark might be too much to the right on an w.

Nowadays font designers can fix this by adding a mark feature with a mark to base lookup. Then anchors do the trick.
Erwin Denissen
High-Logic
Proven Font Technology
Top

Erwin Denissen wrote: ↑
Mon Nov 26, 2018 1:31 pm
When one types a base character followed by a nonspacing mark, and the font doesn't contain the accompanying precomposed character, then it still looks okay by using this trick. Not perfect as the mark might fit perfectly above the e and o but the mark might be too much to the right on an w.

Oh, okay -- I was going to just say "forget it" and just not bother on my current fonts, but I suppose it wouldn't hurt to spend a few more moments on getting those done up right (or better, at least), after spending literally years working on my fonts already.

And so not to be redundant, but if only to confirm that I am indeed understanding this all correctly, it's not that those diacritics need an offset (as I thought from earlier discussion), but just that those glyphs need to be moved over to the left of the LSB, right?

And that would be the usual way of doing things, but then you brought up this point...


Nowadays font designers can fix this by adding a mark feature with a mark to base lookup. Then anchors do the trick.

Oh! Well, that sounds interesting! In fact, I just spent the last half hour trying that out, created a class with all my 15 diacritics in it, and then a MarkToBase lookup... but that's when things got a bit confusing for me. 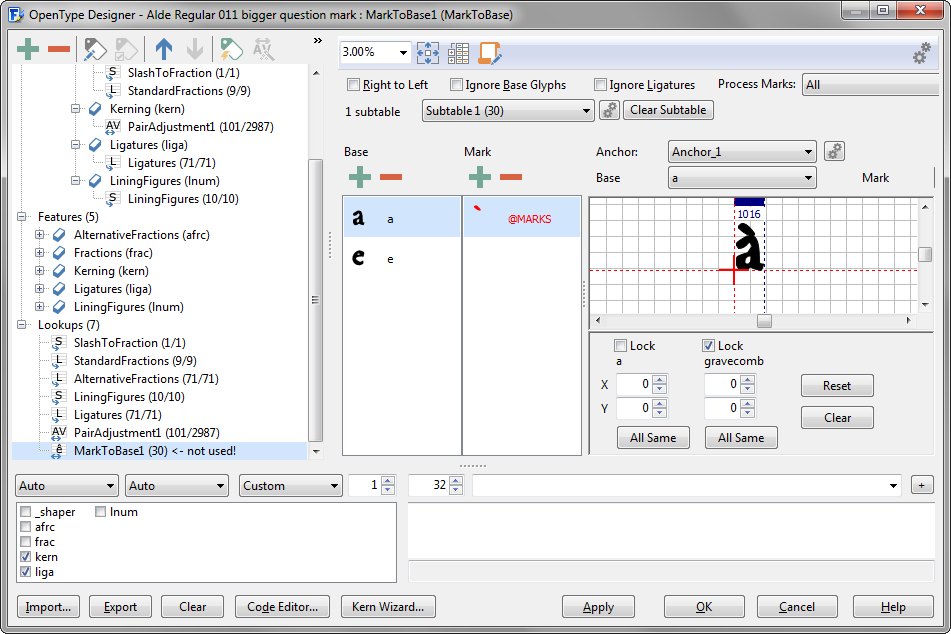 
...but then what do I do? I presume under "Base" I would add in, say, a vowel, but I don't want to add in a whole class -- like, all my lower case "a" glyphs, including those that have diacritics already -- I would just want to add in the the lone "a" glyph, I would think.

So I added that first one in, with my "marks" class under "Class," but then when I want to add in my next vowel, "e," it won't let me add in that "marks" class a second time.

I don't know, I don't understand this. Maybe I'm overthinking this or something -- I couldn't seem to find any sort of tutorial on that here, though (after searching for both "mark to base" and "MarkToBase"), just the odd post/thread with some suggestions or issues.

Well, maybe I'll just do it the old way, dragging those glyphs to the left of the LSB -- it almost seems easier to do it that way than the MarkToBase lookup way.

But what do I know.

Just add one base class and one mark class. You can then later decide to add more combinations by just adding glyphs to the classes.
Erwin Denissen
High-Logic
Proven Font Technology
Top
Post Reply
18 posts