Get help with FontCreator here. Please do not post feature requests or bug reports here.
Post Reply
3 posts • Page 1 of 1

I don't know if this is a bug or not, but it is slightly annoying.

There are some anchors which appear in the list of available anchors when I'm adding anchors to a glyph. One of these was a failed experiment and the other is there because I copied several glyphs with anchors from the 'Roman' to the 'Italic' before working on transforming them into italics.

As far as I know neither of these anchors is present in any glyph but they still appear in the list when I wish to place an anchor. Is there any way to get rid of them ? 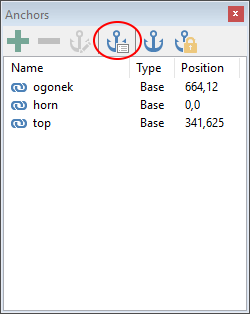 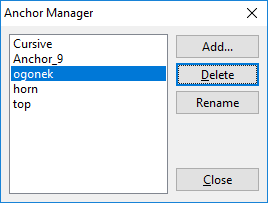 Unused anchors won't end up in your fonts, so technically it is not an issue.
Erwin Denissen
High-Logic
Proven Font Technology
Top

Thank you, I don't think I've seen that dialog before.

I deleted the two unused anchors from the 'Italic' font. Interestingly the little red marker which appears in the corner of a font which has been changed didn't appear and the 'save all projects' icon on the toolbar was still grey. So as a test I closed without saving and Font Creator didn't complain.

I then re-opened the font projects and unsurprisingly the changes hadn't been made so I deleted them a second time and made a trivial change to one of the glyphs and then saved the projects.

Now that I know of it's existance I will remember that dialog, thank you again.
Top
Post Reply
3 posts • Page 1 of 1