When creating a font at base level (empty list of open type features) the five accent keys on the keyboard (` ~ ^ ' ") remain behaving like expecting a next key press. In order to actually letting the 'accent' character show a following hit of the 'space' bar is required.
This even applies when I change the contents of the actual accent button characters.

Is there any workaround to let some or all accent buttons to behave like normal buttons?

Frankly I have no clue whether this is a font property or a text editor property.

by Bhikkhu Pesala
They are called dead keys.

After pressing ` ~ ^ ' or " you must press the vowel to get the accented vowel: e.g. àèìòù or ãẽĩõũñ or ÀÈÌÒÙ etc.

Which keys are dead keys depends on which keyboard layout you select in Windows. It is a function that is available to all programs running on your PC, even notepad.

by Roberto
But can their functionality be modified to normal key behavior?
...in FontCreator that is; asking font users to modify Windows is not an option of course

by Bhikkhu Pesala
Just select a different keyboard without dead keys, such as US or UK 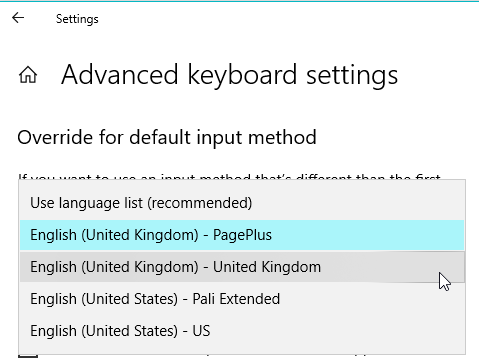 by Roberto
Aha, so it's a pure OS thing which cannot be overrided by font specs.
Hmm, switching keyboard will cause a US keyboard in the Netherlands some characters to be mixed up (using normal fonts).
So that's not really an option for private use and particularly not for fonts intended to be shared.
Thanks for the replies, Bhikkhu!

by Erwin Denissen
I always use English (United States) and have never encountered issues with it. 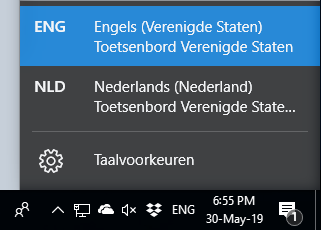 by Roberto
Sorry I mixed up things myself: some characters being mixed up happened in the passed having a US hardware keyboard while sometimes the NL keyboard was set in Windows. Always had by default two OS keyboards installed after a Windows installation: NL + US
If (either accidentally or not) the Ctrl key was pressed for while it caused Windows to switch/toggle keyboard layout. This can happen if pressing the Ctrl key too long before finishing off a shortcut.
On this pc I 'deleted' the NL keyboard in Windows so that issue has not occured anymore.

by Roberto
For a moment I thought of a good use for some dead keys: key = lower case Latin, shift + key = upper case Latin, accent + key = lower case Greek characters, tilde + key = upper case Greek characters.
Unfortunately either undoing dead key behavior or actually taking advantage of them turned out highly unpractical for sharing fonts: just found that keyboard layouts vary a great deal among nations. Not all keyboards share the same symbols and more importantly there are keyboards not even featuring dead keys.

by Bhikkhu Pesala
Applications like Word allow you to modify the keyboard to add your own shortcuts, and Autocorrect can also be used to make it easier to type symbols, e.g. (R) changes to ® when you type the space after (R).

A font maps characters to code-points as defined by Unicode. It is independent from keyboard layouts.

Ligatures can be inserted using OpenType Glyph Substitutions, e.g. f+f+i substitutes the Alphabetic Presentation Form ffi, but if an application does not support the liga feature, or if the feature is disabled the ligature is not displayed. Either way, the text string used and copied to the clipboard is f+f+i not the single glyph ffi.

by Roberto
Yes, but would it also be possible to define in the font that e.g. Alt +o+o produces 8 ?

by Bhikkhu Pesala
No. Font mapping is independent of keyboard layouts
All times are UTC
Page 1 of 1
Powered by phpBB® Forum Software © phpBB Limited
https://www.phpbb.com/