Get help with FontCreator here. Please do not post feature requests or bug reports here.
Post Reply
13 posts • Page 1 of 1

I must be missing something here. The Petite Capitals Private Use.xml script fails to actually create the 155 glyphs I expect it to add to my font. The cells are there with what seems to be the correct code points but they remain empty.

I noticed that CompositeData.xml now uses "friendly" names but the transform script does not. I tried enabling friendly names both before and after running the script to no effect. So, do I need to use an older (pre-frendly) CompositeData or what?
Top

I see some possible kinks but this should work.
(I would have done the German sharp S a little differently for one thing)
Top

That Private Use Area Transform script should probably be deleted. It will only work with earlier versions of CompositeData.xml

I am seeing doubles 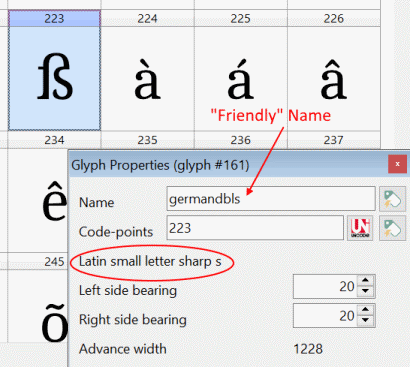 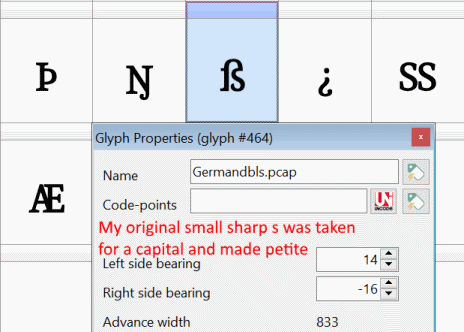 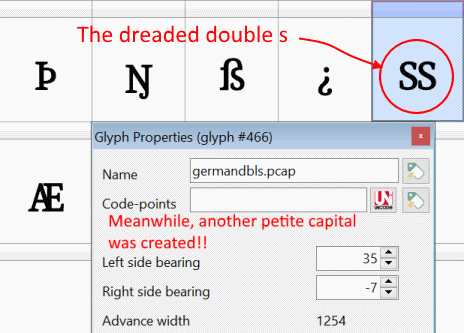 With the use of friendly names, wouldn't all of the old scripts now be obsolete?
Top

I tend to include both forms of germandbls and Germandbls in my fonts so that users can choose whichever they prefer. 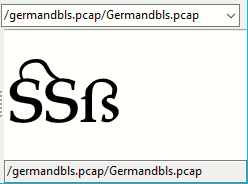 The PUA script are largely redundant, but there are still applications out there that do not support OpenType features so the only way to access these extra glyphs is by using PUA codepoints. Leaving a couple of (almost) obsolete scripts does no harm.
My Fonts • Reviews: MainType • Font Creator • Help • FC13 Pro + MT10.0 @ Win 10 64-bit 2004 build 19042.1052
Top

You are killing my plans with this in CompositeData:

I do not pretend to fully understand the scripting language but I just copied the instructions for mapping glyph 223 and changed the member glyphs. Sadly, this does not seem to work.
Top

Also, @ 50355 of ConpositeData, two s.pcaps are mapped to germandbls.pcap and the SS is, in fact , the uppercase form, not the lowercase.
I advocate for the name "smallsharps" for the lowercase form, "CapitalsharpS" for one form of the capital and "Germandbls" for the other form
Top

I experimented on another font which, like mine, contained both upper and lower cases of the German Shsrp S. The UMPC script produced a new glyph, Germandbls.pcap. 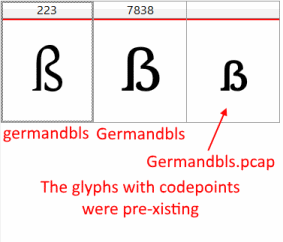 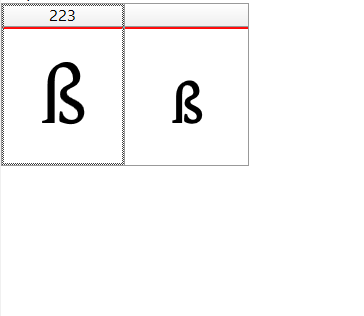 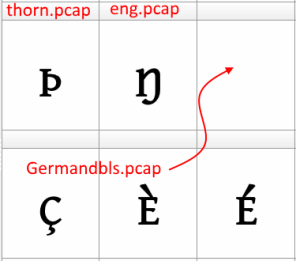 What I had hoped for was: if the small sharp s were present, the script would create the two versions of the uppercase glyph which would allow the user to choose which would be used in small/petite caps. I have not figured out how the SS glyph shown in my first post came about.
Top

Finally! Starting fresh after removing all of my little tweaks, the results are much closer to what I expect. With 7838, Germandbls, and 223, germandbls, in place prior to running the UMPC script we get the greatly anticipated SS glyph, germandbls.pcap, alongside the small sharp S, Germandbls.pcap. 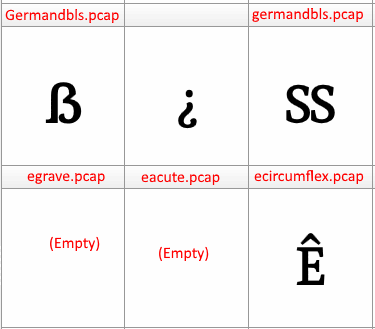 Next, I need to solve why 59 of the accented pcap characters are empty because the existing accents were not named, I believe. In CompositeData, agrave has three possible accents encoded, gravecomb.case, gravecomb, and gravemod. Many of the existing glyphs use mod accents so these PCAP glyphs need something other.
Top

Leon Gauthier wrote: ↑Sat Aug 24, 2019 6:50 amIn CompositeData, agrave has three possible accents encoded, gravecomb.case, gravecomb, and gravemod. Many of the existing glyphs use mod accents so these PCAP glyphs need something other.

I have not yet found the size relationships between Glyphcomb.case, Glyphcomb or Glyphmod (if there is one)
Top

It is up to the user to design the different accents to suit his/her needs.

That is what I suspected, thanks. The font I was working with had what looked like three different sizes of accent marks and only glyph numbers to tell them apart. That is why I had some 59 empty cells after running the UMPC script. Tags made it easy to sort them into three groups and arbitrarily name each group.
Top
Post Reply
13 posts • Page 1 of 1