Get help with FontCreator here. Please do not post feature requests or bug reports here.
Post Reply
11 posts • Page 1 of 1

There is a reoccurring issue. Each time I start the program, I click on Help/About and note the version number... Then, I will check for Updates, and I am informed of the availability of version 12.0.0.2567. I go through the process of downloading and installing; the program restarts automatically, and I can see the new version number when I check. I do what I want, and close the program (eventually!).

However, every time I wish to use FontCreator again, the process repeats itself. The old version number (in my case, 12.0.0.2543) appears, and I can go through the update/install/restart business all over again!!!! Please, explain.
Top

I split your post from a closed bug report thread.

Erwin, you are correct. I have two locations for the program file(s). One is version 12. The other is version 11.5, but they both are carrying time-stamps of the most recent date(s) of updating!!! When I click on the version 12 EXE-file, which is indicated as having been recently "modified," the same old version number appears: 12.0.0.2543 ---- I am still clueless! How about you???
Top

I doubt if Erwin is clueless. If you download a file, the timestamp in Windows Explorer will be the date that the file was saved. Inspect the installer's file properties to see its true date. 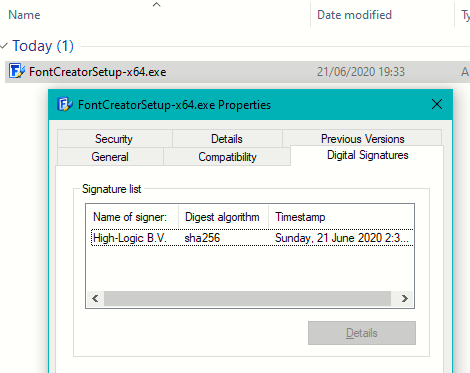 To force the installation folder when using more than one version of FontCreator, use the Windows Command line (Windows Logo Key + R) and paste the appropriate path for your installation. In my case, I want to the install in C:\Program Files\FontCreator 13 so I use this command line.

That is precisely what I ensured that I was doing today!!! I changed the properties of my own shortcut to be sure that I was pointing to my (current) version 12 of the program. Today, I went through the "update" process again and worked on three versions of a new font... After exporting the first base-font, I then opened it, and found that the correct version of Fontcreator was displaying in the font info. I worked on the second and third variations of my font; I was in a hurry to move on to something else, and quickly exported my second variation and decided I had had enough for the day. However, I noticed, when opened the second variation, that I hadn't bothered to change the name of the font name within the properties, and so, I had two fonts, that would override each other upon installation. I quickly restarted my (already updated) FontCreator, fixed my little error, and exported the font once again. This time, when I opened it, the OLD FontCreator version number was being displayed.

I think I may be talking myself into stepping up to version 13, and kissing this confusion good-bye!!!
Top

The Directories, in which the different versions of FontCreator were installed, were labeled with their version number. I guess when the installed automatically, the directory is simply labeled \Program Files\FontCreator. However, I poked about and found a 32-bit version under \Program Files (x86)\FontCreator.
I have removed all Installed versions of FontCreator, and re-installed version 12, then caused it to update; all shortcuts on desktop and Taskbar were removed/deleted, and only one was then generated from the newly installed program file.
Now things work like a charm, again. But, I am still considering an upgrade to version 13!!!

I am glad to know you solve the problem. And yes, if you can afford it, it is wise to upgrade to FontCreator 13, as it comes with many new features, bug fixes, and improvements.
Erwin Denissen
High-Logic
Proven Font Technology
Top