Yes, I did try your tutorial before, Bhikkhu! I managed to get one letter created and it seemed to work fine, and then for some reason I couldn't create a second one and got frustrated and gave up.

Don't blame your tutorial, though, I'll take the blame for that -- this type design stuff does seem to end up confusing me a lot. I understand if I'm a frustrating pupil at times -- if it's any consolation, I frustrate the hell outta myself, too.

It is something I would like to try down the road again, though -- but at the moment what my focus is on is getting this Thoreau font wrapped up, and then get my 1990s-designed website totally revamped and updated (with my fonts embedded everywhere, as an integral part of the design, etc.).

If I can get that done, though, then it would indeed be nice to create a coloured font of my Alde decorative initials, specifically for use in one of my ebooks -- although it's not imperative that I get that done, it just would be nice to do.

A question about coloured fonts has just occurred to me, though -- just as I was writing this.

But what happens when you tell a coloured font to be a certain colour? Does that only affect the black parts of the font, but do the coloured parts stay the same colour?

To explain why I'm asking that, I have my Alde initials, and all I hoped to do was have the letter in the middle be reddish (actually sort-of orangish), surrounded by the black decorative border surrounding that letter. So that shouldn't be too complicated a colour font to do.

But what if at the other end, when I want to use my font, my basefont colour (for my text throughout the document) isn't quite "black," but rather a very dark brown? And so I tell all my text -- including the decorative initials -- to be that very dark brown colour, because I want the black borders surrounding my initials to be that dark brown colour, but I would still want the colour part to come out with the EXACT same colour that I gave it in the font in the first place.

Is that what would actually happen? Or does applying colour to a colour font screw up all the colouring in the font itself?

Applying colour to the text does not seem to affect the coloured glyphs. Tested in LibreOffice, which supports OpenType features using HalfBuzz code.

Bhikkhu Pesala wrote: ↑
Mon Nov 02, 2020 3:30 pm
Applying colour to the text does not seem to affect the coloured glyphs.

I see the coloured glyph you used is ALL colour, though -- no black parts.

I guess that's it -- I actually WOULD like my font work such that I could add colour to my text, and make it a very dark brown rather than black, and then have that apply to my decorative initials, too, but only affect the black part without changing the coloured part (as it seems not to, based on your experiment).

Does that make sense, what I'm hoping might work?
Top

Okay, I am so friggin' stumped here, I've been pulling my hair out like crazy and just can't seem to figure this out.

I had my font all nice with different alts for beginning letters, ending letters, and other substitutions, but I found that my "n.ender" could be different in combination with certain letters, and so I created a second n ender glyph.

Now, how to go about doing the script for that I had recalled someone else splitting his "latin" class into two "latinhigh" and "latinlow" classes instead -- and so I tried that.

And I've been trying eeeeeeeverything that I can think of to get it to work, just for one letter combination.

Before, I had it such that if/when an "n" was the last letter in a word, and ANY letter came before it, then it would substitute the "n" to "n.ender" -- which I have since renamed to "n.enderhigh".

Just for starters, just so i can see if I can get this to work for ONE letter, if that letter next to the final "n" is an "a," then I want the "n" to instead change to "n.enderlow".

Here's a link to the current messy state it's now in...

If you need more info, just ask me -- any help in any way would be so much appreciated!
Top

Would you be willing to send me the font project file itself so I can see names better and see if I can decipher how your font is working right now and possibly find a solution?

Maybe using the methods that I use with Calt features I can tweak what you want.

Um, isn't whatever info you need contained in the TTF file? Doesn't opening that effectively give you my font project?
Top

So I looked at your font project, thanks for sending it, I don't pretend to know exactly how you made everything work because it's your own personal system and I didn't have the time to crack the way your mind works but I may have solved the n.ender issue. I've sent you the project back in your email with the filename change you asked for.

My logic was simple:

1. create a cursory class of glyphs that were lowercase and had low endings (I don't know if I got them all). Called it Lowercase.low

2. replace any n.enderhigh with an n.enderlow when preceded by a lowercase glyph in the Lowercase.low class.

To make this work,

I created the Lowercase.low class.

I made a simple substitution whereby the n.enderlow replaced the n.enderhigh.

Then made a chained context substitution using the simple substitution I just made with the Lowercase.low class in the Backtrack column: 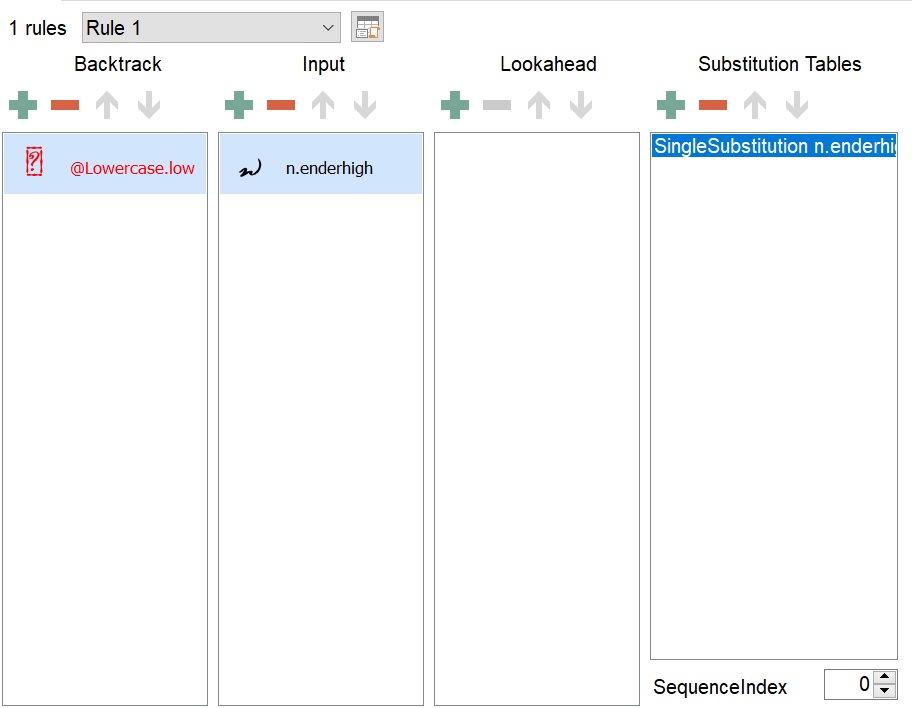 Maybe you've tried this method and it didn't work for some reason that I haven't been able to discover yet, but this seemed to work right out of the gate for me.

Also you may want to check on the settings for your .ender glyphs because some of them are showing up in odd places in words other then the end. Like in the word 'damn' and 'quaker'.

I hope this helps!!

Oh, bummer -- I just went to look at the file you emailed me back, and I get a message saying "This project was created with a newer version of FontCreator and cannot be opened" (etc.).

Can you do a "save as" that's compatible with earlier versions of FC? I'm on v. 11 right now.

Thanks so much, though! I'm juggling some other things right now, too, but I'll definitely have to have my thinking cap on to see what you've done here, I'm sure.

Hey Erwin! If you're out there is it possible for me to do what Pysmon asked and save a FontCreator Pro 13 project as a FontCreator 11 Project?

I don't think that's possible, but we'll see what he says.

In the meantime I've emailed you the .ttf. Maybe it'll be enough for you to figure out and implement on your own more thoroughly. It should give a general idea of what I did.

Oh wow, re the font you sent me, indeed it seems to work for "an," swapping out the other n ender glyph instead -- although I get a major headache trying to figure out what you did. And rest assured it's not you, it's me. I used to do freelance web design, and although I've done okay with HTML and CSS and stuff -- i.e. I'm okay at "design" -- but whenever I tried to learn anything more programmy, like javascript, etc., I just couldn't seem to get my brain to work/think in that way.

And it's the same thing with this sort of stuff -- trapped in an endless maze of swirling logic and if-"this"-then-"that" statements. I also like crossword puzzles, but not sudoku -- it's definitely me. I have an affinity and aptitude for one, but struggle with the other.

Anyway, I see what else happened is that all my descriptive names for all the various ligatures, substitutions, etc. got all re-named to just simple numbered ones, so that makes it a bit difficult to navigate in there, too -- that's odd, that all that got lost. But at least when I type "an" in the OTD then I can just click on the "n" and it takes me right to what I'm looking for.

Nevertheless, my brain hurts -- give me a couple/few days, for a few moments when my head is in the right mode to try to make sense of all this! But thanks, though, I do so appreciate your efforts so much, Jonne! I just need to wait for that "moment of clarity" to come along.

I don't think that's possible, but we'll see what he says.

No, the font project format is not backwards compatible. We are thinking about using a new format, but haven't decided yet. The new format is of course again not compatible with existing versions of FontCreator, but should be made is such way that is should be compatible in the future.
Erwin Denissen
High-Logic
Proven Font Technology
Top

Okay! I just upgraded to FC v.13, and now when I open that first .fcp file you sent me, Jonne, everything comes out okay.

So that's good -- but I still haven't found my thinking cap in all the clutter around here, so I'll have to get back to you later with more.