I've come quite far spacing my font now, but I don't quite know what to do with the diacritic marks. They are used in the composites and placed correctly above the letters, but I don't guess they'll ever be used on their own. So do I even have to space characters like grave, acute, dieresis .... at all?
And if so, are there any rules about how to do this right?

Thanks for any advice!
Top

The marks category contains all known marks. Several are non-spacing combining marks which should have a zero advance width. You can hover over the glyphs to see a hints about this: 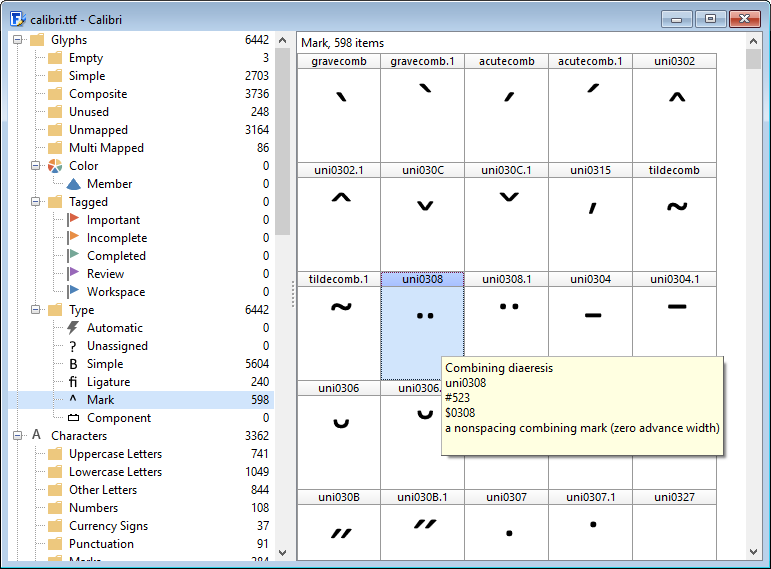 Great, thank you both!
Top

The diacritics are meant to be placed above the preceeding character so the placement should be such that it is in the correct position above a lower case letter preceeding it.

Of course lower case letters are all different sizes and different heights and what if it is preceeded by an upper case character, so you can only get it approximately correct.

That is where anchors come in.

There are two types of anchor, base and mark.

It is also possible to add mark and base type anchors to combining diacritics so that they can stack on top of one another.

In this way it is possible to get the diacritic marks to always position themselves in just the right position for each different character.
Top

@PJMiller - This is not exactly what I was as asking about, but it's very interesting. I didn't bother finding out about anchors yet because I didn't think I'd need that feature. I used "Complete Composite" to create my characters with diacritic marks and it worked really well. So what I don't quite understand is what to use the anchors for when I have my characters with diacritics already built.
Top

The combining diacritics have zero advance width and are placed after the character they are meant to accent. Without anchors they are in a fixed position which is correct for some characters but not for others, with anchors they can be made to move to the correct position for any character.
Top

I'm sorry, I guess I still don't get the sense of it.
Does this mean using anchors is an alternative for manually creating all the characters with diacritic marks?
Top

If you have the combining diacritics as well the user can accent characters which have no accented character in Unicode, for instance in my wifes language they use a lower and upper case 'g' with a tilde which isn't in the Unicode standard but if the font has combining diacritics then that isn't a problem you just put the combining tilde after the g and it places itself above the g.
Top

Ah, now I understand! It definitely makes sense for a font that's supposed to be used in all kinds of languages. I just tried that g with the tilde with Arial and it's really misplaced.

Thanks for your patiences, I've learned something new now!
Top

FontCreator 12 uses combining diacritics for composites. That is the recommended method.

Fonts don't need to have spacing modifier diacritics, but many fonts do include them.