by Karin1610
I just discovered this feature and I'd love to use it because writing with caps only my font looks a bit too tight for my taste. But it seems that Word doesn't support this - at least not by default. Not sure yet about other applications.
Is there a way to activate that feature in Word (like Kerning needs activated)?
Do a lot of programs support it at all?

I know that PagePlus X9 does, and presumably other programs that support GPOS (Glyph positioning) will too: InDesign, Scribus, etc.

I added the feature as Titling Capitals (titl) to my Pali font, and that works fine in PagePlus or LibreOffice. Scribus uses the same method as LibreOffice for rendering OpenType features. Neither are user-friendly.

I don't think Word will support this feature. 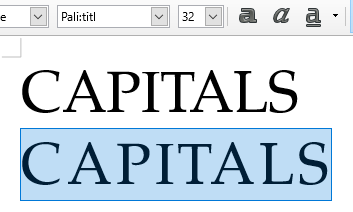 I am sure that Capital Spacing (cpsp) will work too if you use GPOS lookup.

by Karin1610
Hm, it would still be good though to make it work in Word because most people that will use this font work with Word for the most part.

I'm sorry, I'm not sure what that means.

by Bhikkhu Pesala
I mean that it will work in applications like PagePlus or LibreOffice that support Glyph Positioning (GPOS). I don't think Word has any way to use these features, but I don't have Word to test it.

by Erwin Denissen
I'm afraid Word doesn't support it. It would be great if Word would allow us to enable more OpenType features, but for now it is rather limited.

by Karin1610
Thank you both. Then I guess I won't bother wasting time on it.

It's really a shame that a popular program like Word doesn't support more features.
I also don't understand at all why kerning is turned off by default. I didn't know anything about kerning before starting to get into font design and only then I realized that all that time I didn't get the best out of the fonts I used when working with Word.

by PJMiller
If it is important to you then you could simulate capital spacing by defining a Stylistic Set with different spacing (and include the 'cpsp' feature for all the non retarded applications out there).

Although Word supports many different ligature sets you are restricted in which ones you can have on at the same time,

I'm totally sure my font's gonna be used by Word users mostly. It's an elementary school font and many (elementary school) teachers here aren't exactly computer wizards that give programs they don't know a chance.
However, you sure made a point with the chicken and egg thing, so since this is not that much additional work I might do it anyway.
Thanks for the input and also for the workaround.

by Bhikkhu Pesala
Since the average Word users is unlikely to know about OpenType Features like Stylistic Sets perhaps the thing to do is to use kerning for this. At least some may know that much.

If anyone does not like the extra spacing, they can always disable kerning for All Capitals in headings.

by Karin1610
Yes, that would be a way too.
All times are UTC
Page 1 of 1
Powered by phpBB® Forum Software © phpBB Limited
https://www.phpbb.com/