Note that FontCreator 10 can automate much of this work for you using the Optimize feature, which will reduce the number of nodes and remove off-curve extremes.

When editing complex glyphs with many contours, it sometimes helps to focus on one contour at a time to smooth curves and remove unwanted nodes. Using the mouse constantly leads to RSI so knowing how to get the most out of the keyboard shortcuts is helpful.

In points node, if nothing is currently selected, W will select the first node of the top contour in the stacking order (z-order), so to edit a contour it helps to bring it to the top of the stack first.

In Contour Mode, select the contour that you wish to edit, zoom to selected (Shortcut Z), and bring it to the front using the icon on the Align Toolbar (you may have wondered what that was for, now you will learn how it can be used). 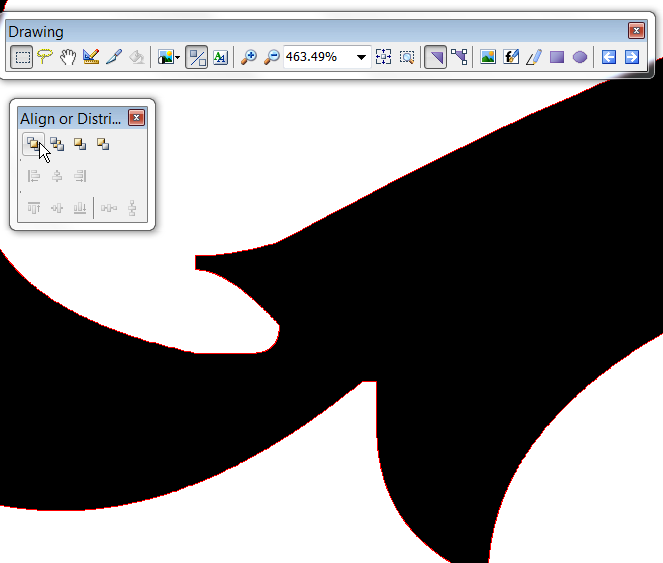 Switch to Point Mode to start editing the contour. Press W to select the first node, then Q and W to cycle around the nodes, moving the nodes with the Cursor keys: up/down and left/right, holding the Ctrl modifier to nudge them by 1 funit, or the Shift modifier to move them by 100 funits. The delete key removes an unwanted node. Now nothing is selected, so press the W key again to select the first node and continue editing. 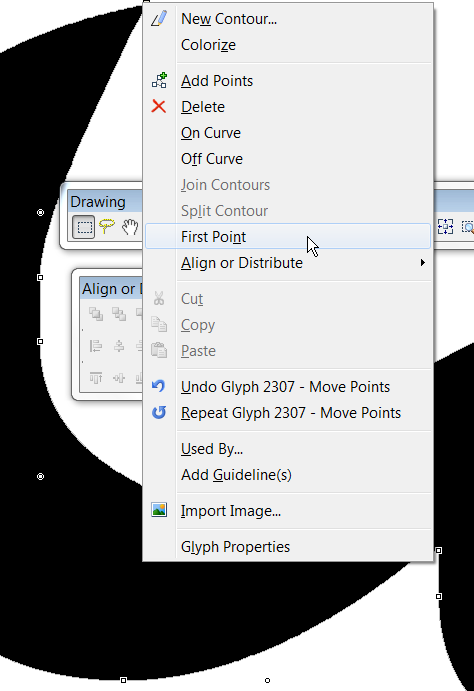 Using the W and Q keys in Contour Mode will select the previous or next contour, then zoom to selected to focus on the next contour to work on, or zoom out (Z) to select one with the mouse. 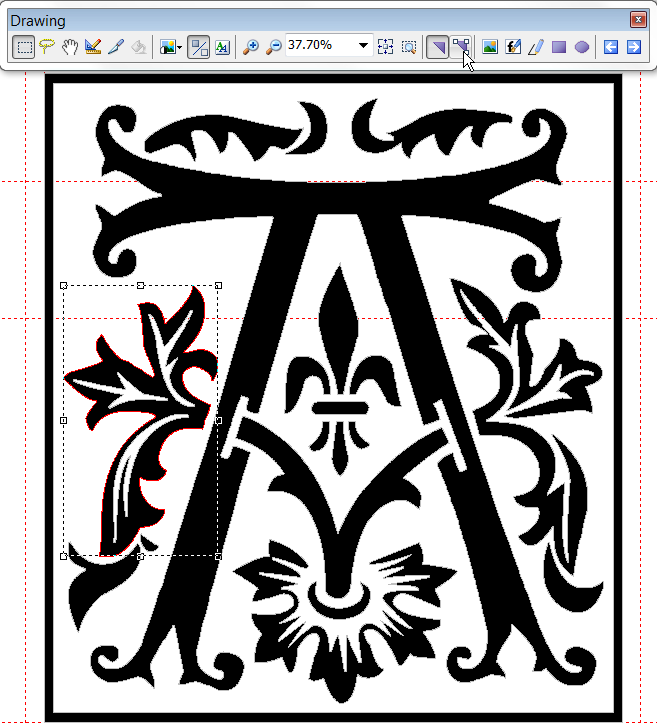 I spend a lot of time smoothing glyphs to reduce the number of nodes. A nearly perfect circle can be created with just 12 nodes (create one with the ellipse tool to see), so only two off curve nodes are needed between two on-curve nodes for a smooth quadrant. After applying an italic transformation, and removing off-curve extremes with the validator, you will see many intermediate nodes that are not really necessary. Use the background image to take a snapshot of the current glyph's shape before you start removing nodes.
Now, after deleting all but the two off-curve nodes nearest to the on-curve nodes of a quadrant, you can simply move these two nodes until the curve fits the background image. Here's a screen shot from an italic figure eight. The background image toolbar can be hidden once you have copied the current glyph.

Here's a simple trick. I like to have all four fonts in a family arranged in a logical order Left to Right: Regular, Italic, Bold, Bold Italic.

When opening projects, in the File Open dialogue, click on the Name heading twice to sort them in reverse order, like this.

Now select the four files and click on Open. They will open in this order on the Tab bar.

See this earlier tip on how to rearrange the tabs by closing and reopening FontCreator.

After carefully arranging the toolbars where you want them, export the FontCreator Windows Registry key to keep a backup of the settings. The exact path will depend on the version. For FontCreator 12 it will be found here:

Keep a backup of your registry keys on external media too. If you need to reinstall FontCreator, run the registry file from Windows Explorer to add the settings back to the Windows registry.

by Bhikkhu Pesala
The latest versions of FontCreator makes this tip obsolete as validation errors are now shown in the Trouble-shooting category of the Overview Panel, but the tip is still useful for those with older versions.

A few users have requested that the Font Validation results window be made non-modal so that it can be referred to while correcting errors, but for the reasons stated in this post it is not practical to do that.

Here is a work-around for the problem:-
It may seem like a lot of steps, but it does not take long to do. You can now correct even a long list of validation errors that FontCreator was unable to fix automatically (usually Intersecting co-ordinates), deleting each error readout from the User Notes toolbar as you go. 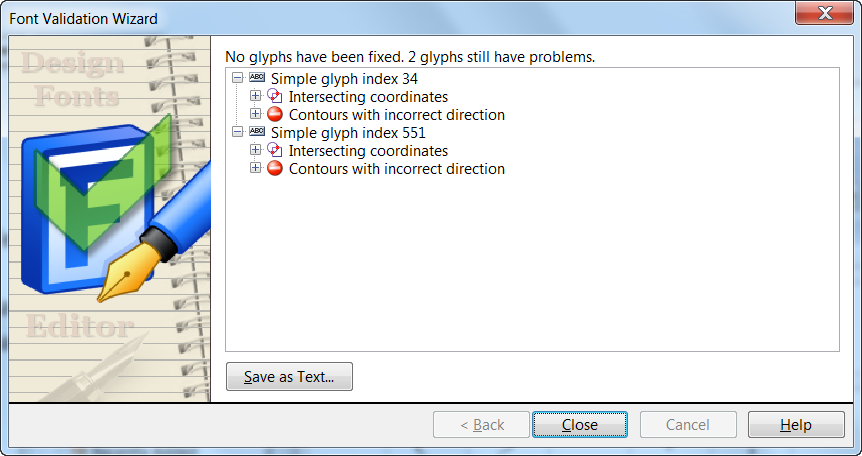 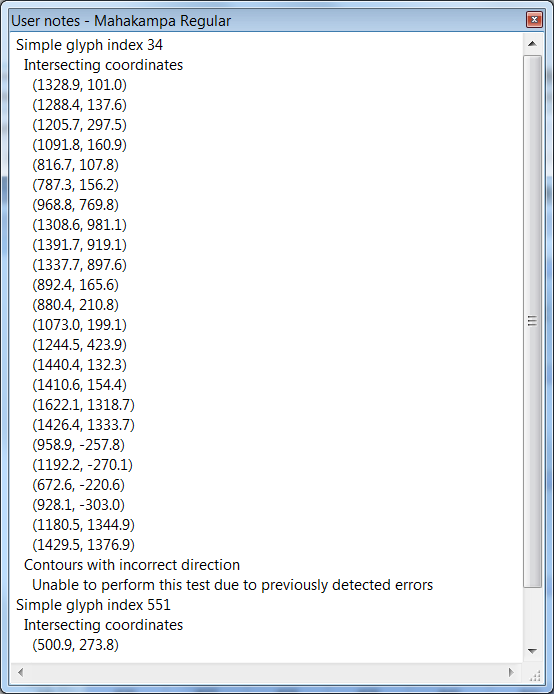 by Bhikkhu Pesala
Installing to a Custom Folder

Hold the Windows key to open the Windows Run command dialogue, and paste the appropriate command line to install FontCreator. As with all commands, the syntax has to be 100% correct or it will fail, or install to the wrong location. 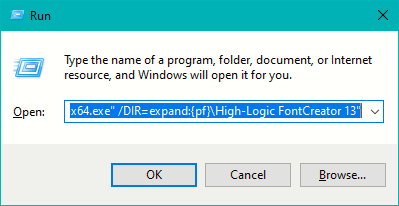 Re: Installing to a Custom Folder

by Alfred
If you specify the path as

(assuming that the installer is in your Downloads folder) Windows will replace the environment variable '%UserProfile%' with the correct folder path for the current user.

by Bhikkhu Pesala
Checking for Errors

While scrolling through glyphs in the Glyph Edit Window using the Alt + Right/Left cursor keys to check for errors with alignment of accents, etc., you can also check for kerning errors.
Here, I came across Ŵ circumflex, which was not kerned with A or a.

By selecting the W and opening it in a new Glyph Edit Window, one can see that the Capital W is already kerned with both A and a.

To fix this, I realised that I needed to add Ŵ circumflex to the Capital W kerning class.

Improvements in FontCreator 10.1 make it easier to identify kerning pairs that might need attention, but there is another feature that I only rediscovered recently. 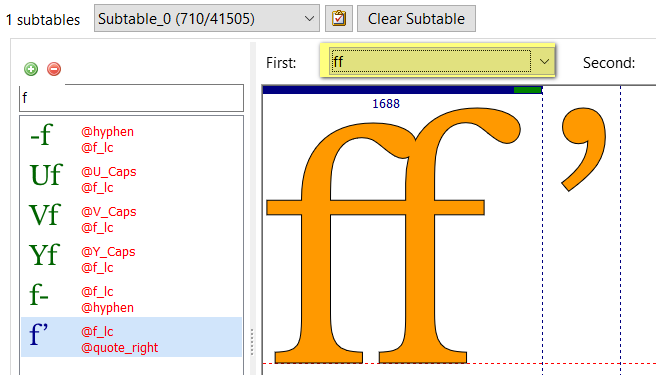 A kerning pair may be right for one glyph in the class, but wrong for another. Open the Class Manager from the top of the dialogue to edit the kerning classes, Make sure that you remove a glyph from one class before adding it to another to avoid "Class overlap" errors. These are shown as warnings in the Code Editor validator. They won't prevent your font from exporting, but they will flatten all kerning classes in the exported font. 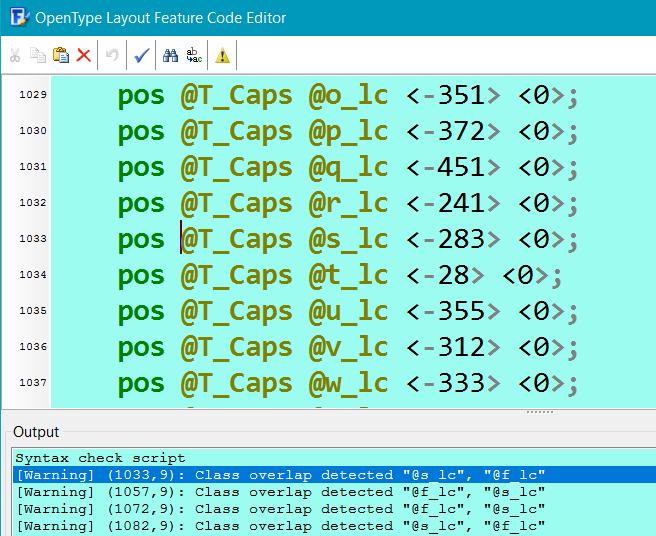 While comparing similar glyphs in this way, you may spot some other previously unnoticed errors like misaligned accents, or even differently shaped base glyphs where some have been updated, but others have not. The screen shot above highlights an error in the ff ligature. While creating the ligature, I moved the glyphs closer together by 150 funits, but forgot to edit the right side-bearing to compensate. The right quotation mark is therefore spaced too far away from the ff ligature, but is OK for the lowercase f.

There's another trick worth knowing for ensuring which glyph in a class is displayed in the list of kerning pairs. In the Class Manager, use the Up button to promote the glyph most likely to cause clashes with the other glyph in the pair to the top of the class. Although è acute comes before e double grave, I have promoted it so that it appears first. If that does not clash, then I can be confident that none of the other glyphs in the class will clash either. Autokern will use this first glyph to calculate adjustment pairs. 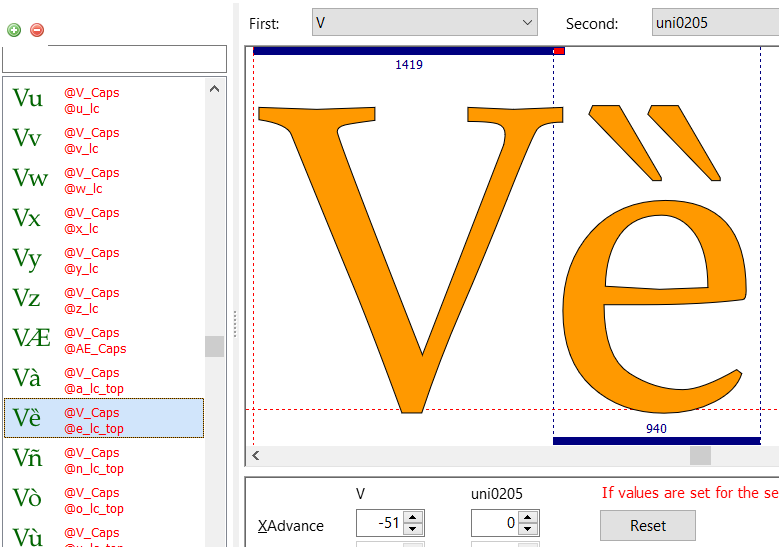 With focus on the kerning pairs list,¹ press the Insert Key

This will bring up the dialogue to add kerning pairs.

Press the tab key to switch focus to the list of second kerning pair members. Scroll up or down using the cursor keys. Notice how the OK button gets greyed out when a kerning pair already exists, and is only available to click if a pair does not exist.

Press shift tab to switch focus back to the list of first kerning pair members. Scroll down, Tab to the second list, and scroll again. With Insert, Tab, Up/Down, one can quickly find missing kerning pairs and add them to the lookup table.

To save changes click on OK. If you were just looking, or opened the dialogue in error, press Ctrl W to close it.

¹ Ctrl F8 with focus on the kerning pairs list will bring up the code editor.

In the OpenType Designer dialogue, there are three trees on the left, which may be expanded or collapsed. I found that I was spending a lot of time collapsing and expanding the script tree, and scrolling to find the feature or lookup that I wanted to edit. There is a better way to work.

Script Tree
One usually does not need to add scripts, so you can leave this tree collapsed. 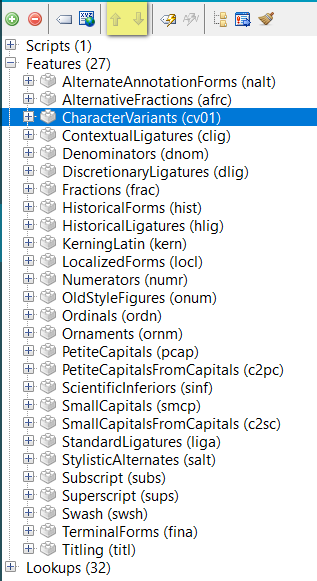 The features are arranged in alphabetical order and cannot be rearranged. I expand this tree when I am exporting fonts as WOFF. Before exporting WOFF versions I delete a lot of glyphs, so some features need to be deleted. Features with empty lookups won't be exported anyway, so there's no need to delete those, but those like Character Variants, which have depleted lookup tables need to be deleted. 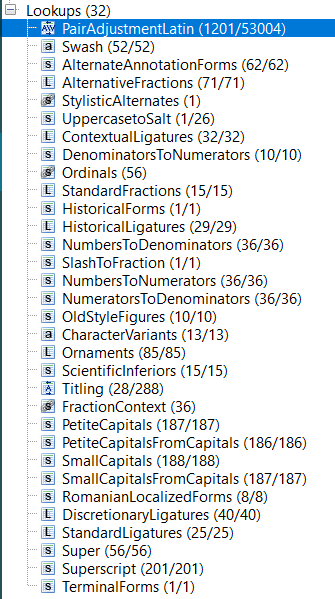 The most frequently edited lookup is the pair adjustment for kerning pairs. I move this to the top of the tree, where it's most easily accessible and I leave this tree expanded. FontCreator remembers the previous state when restarted.

Note that lookups can be moved up or down in the tree by using the arrow buttons on the toolbar. The order of lookups is important. If, for example, Discretionary Ligatures is above Small Capitals, and if both features are enabled, the discretionary ligatures will take precedence over Small Capitals, which can leave documents looking Tacky.

Give some careful thought about which features are most important and rearrange the order of the lookups accordingly. Please ask on this earlier thread if you have any questions about the best order for OpenType features.

I just came across a bug in one of my fonts that I might have spotted sooner if I had not enabled the Alternate Fill mode. There are pros and cons of each fill mode. Using the Font Validator or Validation Toolbar will catch this kind of error, but I did not use either in this case.

The white outline of the contours with incorrect direction that you see in Alternate Winding Mode in FontCreator do not show up in an exported font.

Now that one can add loads of kerning pairs by using kerning classes and autokern, fonts tend to get bloated with a lot of pairs that are too small to be worth keeping. For a standard font with 2048 funits per em, a kerning value of less than 10 or 20 is barely noticeable. Fortunately, the OpenType Designer has a way of removing these small values quickly.

Accents should be designed in the correct vertical position for lowercase glyphs. When the Complete Composites feature is used, they are raised for Uppercase glyphs by the distance between x-height and CapsHeight.

Accents for Small Capital glyphs are centred vertically on the CapHeight. To adjust the vertical position of accents for Capitals or Small Capitals, temporarily edit the CapHeight in font properties. One can use the Calculate button to reset it to what it should be after using Complete Composites.

In this screen shot I have manually changed the CapHeight from 1493 funits to 1550 funits to raise them by 57 funits over Small Capitals glyphs.

Complete Composites will align accents correctly for most glyphs, but some glyphs have an optical centre that is different to the geometric centre, and all glyphs should be checked visually for the best results.

Adding a Diagonal Guideline for an Italic Font 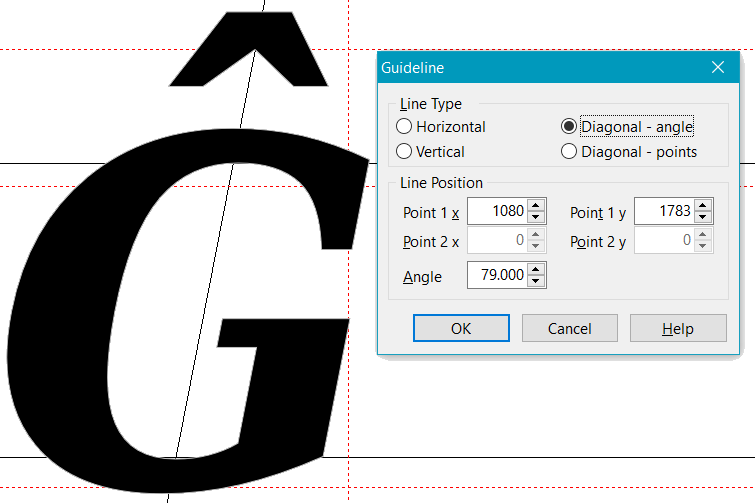 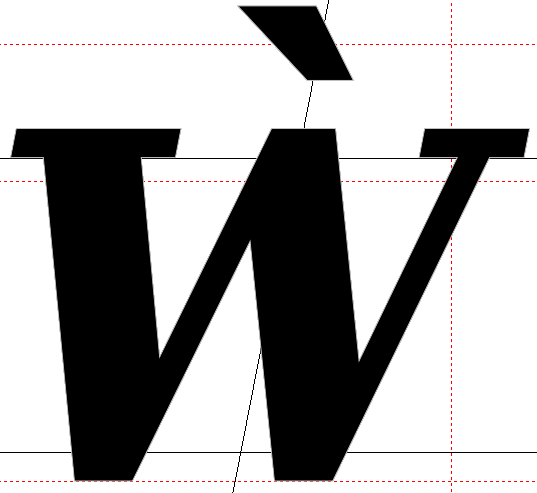