I just noticed the url to the font was messed up. It is now corrected.

I like to do a lot of work within the FontCreator Editing screens.
There is so much more control there than my shaky hands have with paper and pen.

I start off as simple as possible, then add points and move them around (usually selected in blocks) until I get what I think (do we ever really finish a font?) I want.

Here is a neat little trick I learned on rounding curves.
Suppose I have a single off-curve point to round a corner, but it does not give the control I want.

Remember outer contours are clockwise, inner contours are counter-clockwise.
I Select the on-curve point (with the black dot in the center) upstream from where I want more control:
Press "A" to add a new point half way to the next point, press "F" to convert it to an off-curve point. Of course the new points turn red because they are redundant. Press "W" to advance to the corner off-curve point and press "A" and "W" again. Press "Q" to move back to the corner point and press Delete. 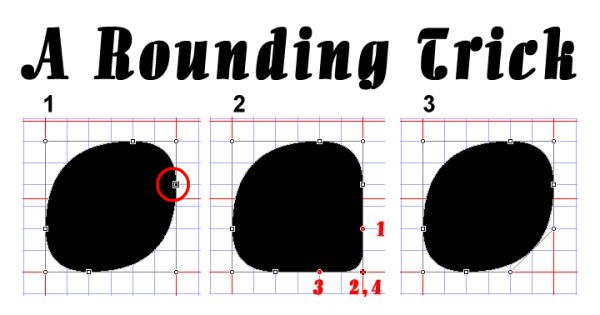 Far more quickly done than explained, that easily I have added the new points very close to where they belong for making the final adjustments to get my curve looking just the way I want.

Back to my topic.
Joining Flowing Script is a challenge, especially with r, s, x, and z where the connections often need to be made in "mid-air."

In studying the works of others, I found that most often (exactly 91.2345% of the time) the connection was made by a tail (Character Elongation in the vernacular) extending from the right side of the glyph meshing in some way with the left side of the next glyph.

I saw ONE font where the reverse was true, but it seemed clumsy.

Having connecting tails on both sides of the glyph would be interesting but I have only seen it done with picture fonts like Trains, and Circus Cars.

Somehow those squared ends just don't look right to me.

Usually the two points were perpendicular to each other, but sometimes horizontal. A few were on forty-five degrees, and some just ended in points or blobs of whatever.

Usually there were some alignment problems here and there, and some didn't even try to REALLY connect. 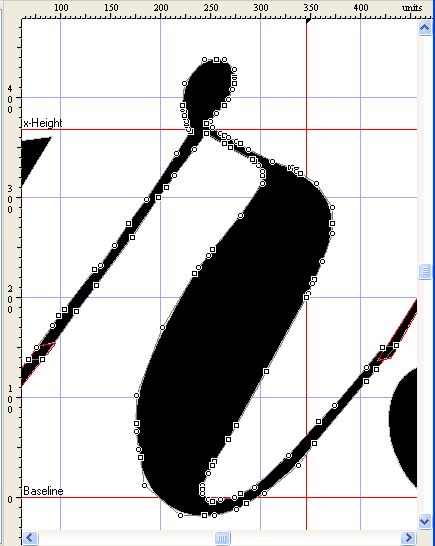 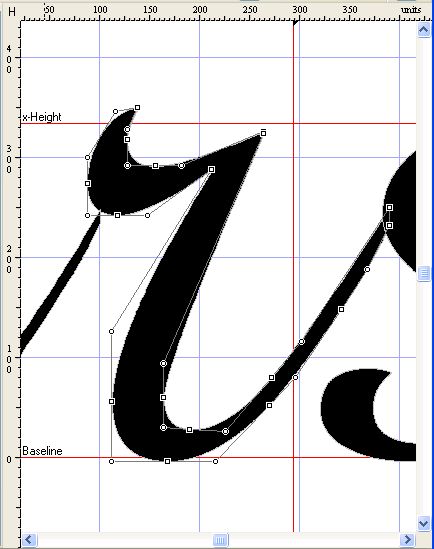 Microsoft recommends an overlap of at least 70 f-units all on the trailing (or right side of the glyph in right-to-left languages) to prevent pixel dropout caused by their rounding process, and I only provided 50 f-units of overlap.

Most flowing fonts I've looked at have far less than 70 f-units of overlap and seem to work OK.

At 12 Point size the overlap areas are hard to see, so perhaps it doesn't matter, and all of the above methods are valid,
but I decided to try something different.

What if the right side ended with an on and an off-point, while the left side was the reverse?
This would make for a good firm "Handshake!"

I designed the glyphs, then started trying out different connecting points.
I wanted nice round easy to remember point locations.

I finally ended up with the right side ending with an on-curve point at Right Bearing plus 200 f-units and 310 f-units above the base line, and an off-curve point 50 f-units lower at RB + 200, 290 on the left side of the glyphs (where needed - there is no problem where it just stabs into the glyph body), again, 50 f-units apart. 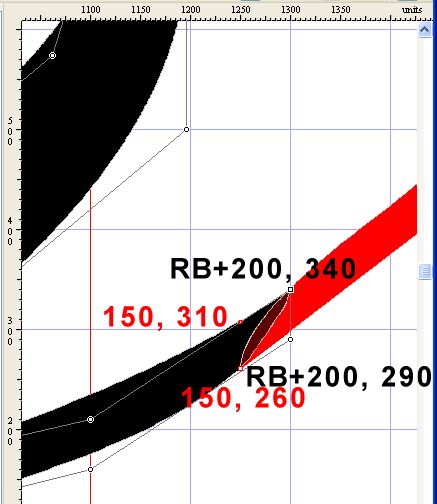 This way, the "sharp point" meshes with a curve on either side, so the visible parts of problem glyphs overlap in ellipses.

FontCreator made this real easy. Just press F11 or click on View > Toolbars > Comparison. Type in whatever character(s) you want to see before and/or after the glyph you are working on.This allows you to see the connections as they will actually be in your finished font.

A neat trick is to make a connecting tail just the way you like it, then use the knife to cut it off and save the tail to the clipboard.
Press the Undo button so the original glyph is restored.
Use the big blue arrows to step through the editing windows and paste the tail segment wherever you want it. 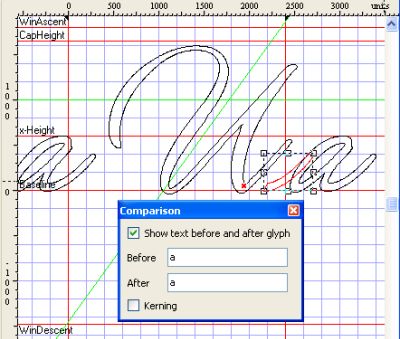 You may wish to cut off the existing tail before pasting.
When you get everything the way you like it, make sure the two contours overlap and use the Get Union button.

I like to press the blue arrows to scroll through the font, then change the glyphs before and after to check a wide variety of fits. All possible combinations would be best.

Also, setting the RIGHT and LEFT BEARINGS is easily done using Tools > Autometrics. I set the left bearing at +100, the right at -200. Done!
... Well, except for the Caps and glyphs with tall ascenders that extend beyond the connecting points.
Those bearings have to be set manually.

Here is my new font.
Did it work out?
You decide.

Dave -- I think you did superb job on that font.

Too often my attempts end up like this one... bad design at the start, and bad execution at the end.