by Bhikkhu Pesala
What is an OTLFD script? The file extension is short for Open Type Layout Feature Definition, and is used by FontCreator's OpenType Designer. The scripts can be edited in Notepad or a similar text editor.

FontCreator 9.0 or later versions include the Visual OpenType Designer so that users don't need to do so much coding, but the Code Editor is still present for those who prefer to work with code.

After adding, editing, and ordering the OpenType Features and Lookups for one type style, there's no need to repeat the work for other styles in the same font family. (This assumes that all styles in the same font family have the same glyphs, with the same glyph names. If this is not the case, the Code Editor compiler will report errors such as glyph not found, and will not compile. Warnings, e.g. about unused Kerning Classes can be ignored).

After completing work on the Regular style:-

Switch to another style. Since the Italic style may have different kerning values to the Regular style, first one should copy the kerning pair adjustment lookup for the Italic style.

Select All (Ctrl A), and Copy (Ctrl C). Do take care that you're not pressing Ctrl V by accident!

Don't worry, changes won't be lost until you save the font project, so you can check that it works correctly before saving the changes.

Select All (Ctrl A) and paste the lookup back again from the clipboard (Ctrl V). Again, take care that you're not pressing Ctrl C.

OK to save the changes, and verify the script, before saving the updated Font Project.

Repeat for all of the other styles in the Font Family.

All these warning mean is that I defined some kerning classes that are used in other types styles, but not in the current style (bold italic).

A look in the Class Manager highlights the unused classes. They may be deleted, but they can be left in case they are wanted later. They do no harm.

by Bhikkhu Pesala
The Ctrl F Shortcut can be used in the Code Editor to find further occurrences of the selected text. 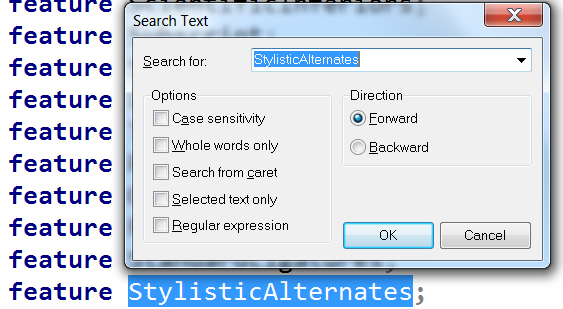 I name my lookups the same as the features that use them to make searching easier. The default names are based on the lookup types.

Setting Preferences for the Code Editor

by Bhikkhu Pesala
After reinstalling FontCreator, I found the font too small for comfort in the Code Editor. At the top right of the Code Editor is a button to change the settings. Here, the default font, and colours can be changed to suit your personal preferences. Any available monospaced fonts are listed.

by MikeW
Those options are not present in my version of FC Pro 10.

MikeW wrote:Those options are not present in my version of FC Pro 10.

Probably, you're looking in the wrong place. Open the Code Editor after opening the OpenType Designer dialogue. Click the icon at top right to change the settings. The settings are there in both FC10 build 2125 and FC9.

by Bhikkhu Pesala
Regenerating Kerning Pairs
Instead of copying the kerning adjustment pairs lookup for the Italic style before importing the OTLFD script for the Regular style, one can simply regenerate the adjustment pairs. One might also want to do this if the kerning is too tight or too loose.

Right-click on the Kerning adjustment pair lookup in the OpenType Designer, and select Autokern from the context menu. 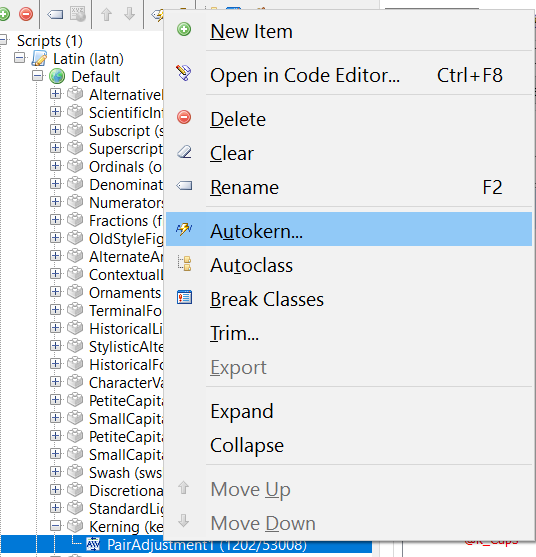 This will open the Automatic Kerning Wizard dialogue, where you can change how tight the calculated kerning will be by adjusting the Glyph Spacing Value. To make the kerning more generous, the second row of Preview Text should be longer than the top row (the current spacing). If it is not, increase the glyph spacing value, and update the preview. Try with different preview text too. When you click on Finish, FontCreator will generate the kerning adjustment pairs, which may take a few minutes on large fonts. 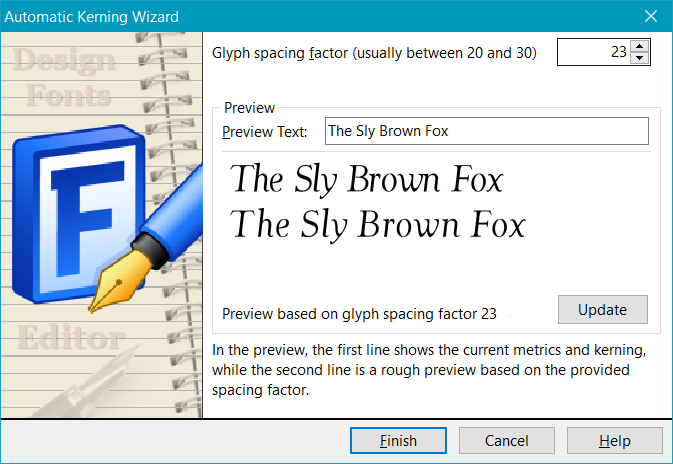 When the process is finished. Scroll down the list of kerning pairs looking for any that are Blue or Red. Some fonts need to have positive kerning pairs — it's not an error — but the blue pairs often need manual adjustment. 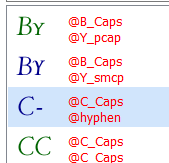 If the Green (negative pairs) all need adjustment because they are too tight or too loose, run the Kerning Wizard again with a different Glyph Spacing Value. Red pairs are zero and won't be exported. They can be left or deleted as you wish.

by Dave Crosby
Wonderful! That simple little Font Creator I purchased for $35 in 2004 has become a World Leader!
All times are UTC
Page 1 of 1
Powered by phpBB® Forum Software © phpBB Limited
https://www.phpbb.com/