We will move topics to this forum, once we've implemented the requested feature(s) and/or enhancement(s).
Post Reply
10 posts • Page 1 of 1

I think it would benefit users if there was a No Change option for digits when one invokes the Autometrics option. 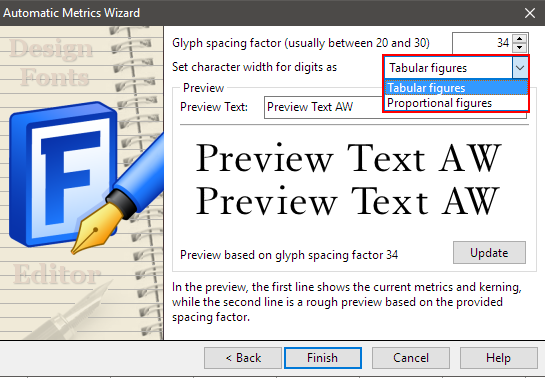 If one redoes an existing font and has already set the widths for tabular and proportional digits, an either or option isn't as useful as a Don't Touch 'Em option when running autometrics.

(Yep, I know one can copy the digits and paste back afterwards.)
Top

I would also find this useful.
Top

Hmm. I guess I didn't think this out really well.

How would FC know that a particular glyph is a digit?
Top

Which, in a fuller font, isn't enough...so I'll keep tagging, switching to the tag, highlighting those glyphs, copying and pasting. There are pre-composed fractions, pnum, tnum, sups/denoms, etc., to deal with.

Is there the possibility to use a tag system whereby FC would skip a certain tag if a glyph would be thus tagged?

I only thought about this as I was comparing the results of the Auto Kern feature, both where I set the metrics and following using Auto Metrics. I almost never use either option and it was a good exercise to go through yesterday.
Top

I wonder why you need optical metrics to calculate spacing for anything other than the regular digits. I would run autometrics first, then generate the superscripts, and other figures like onum, pnum, or tnum.

After generating the superscripts I would generate the subscripts, denominators, scientific inferiors, and standard fractions using complete composites.

Autometrics might change the advance width for regular lining figures that have been matched with maths symbols so an option not to change them would be useful
My Fonts • Reviews: MainType • Font Creator • Help • FC12 Pro + MT9.0 @ Win10 1909 build 18363.592
Top

I don't want Auto Metrics to run on everything. That's the point.

I think a tag to skip what Auto Kern runs against would fit the bill.
Top

This has now been implemented in FontCreator 11.0 build 2400 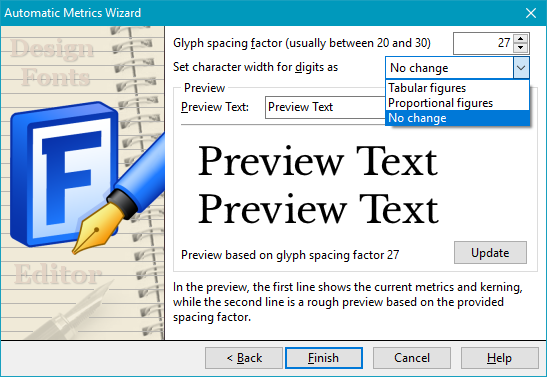