Having just added in all the substitutions for all my smallcaps (including those for piles of ligs) -- and then screwing it up and having to start all over from scratch, only to screw it up again and having to start all over once more (finally got it right!) -- it occurred to me that there surely has to be an easier, simple way to add in those various "items" in that dialogue box.

As it is now, you click the + sign, get another (third) little window, select your glyphs in there, click OK, and then you're back at the OpenType Designer (your second window).

I can't help but wonder if there might be a way to have that third pop-up window, from which you select your glyphs, right in the main OpenType Designer window (second window, outside of the main FC interface)? I mean, if there was some way to just have it "right there," without having to click + and then OK each time in a third little window,that would be so awesome!

I haven't quite thought through the logistics of it, but something in that direction could really simplify and speed up adding lots and lots of "items" such as that.

Reflecting on this a bit more, I'm thinking that I can see that perhaps it might be problematic to have "so much stuff" in the OpenType Designer if one's monitor resolution was low, so maybe that little window could not be permanently attached to the other main OpenType Designer window, but you could have it either "docked" (and attached) or just floating -- or even close it if you don't even need it.

But having it "right there" would indeed be so helpful. Like, say you're working on your ligatures, then you just could perhaps double-click on the left column of glyphs, and that automatically enters in a new entry, and then waits for you to double-click on another glyph in the second column (with appropriate errors, like if you haven't selected which feature you're adding to, or if you add in a new first glyph but then try to add in another before completing the first one, etc.).

All I can think is wow, how FAST one would be able to add in new items compared to how it is now (having to click the + sign for a new window, select your glyphs, and then press OK each time -- over and over and over again).

FontCreator 12 will now build features for you. For example, it will find all glyphs in your font with a .smcp suffix and add them all to the lookup table for the Small Capitals feature. Many other features can be generated too. 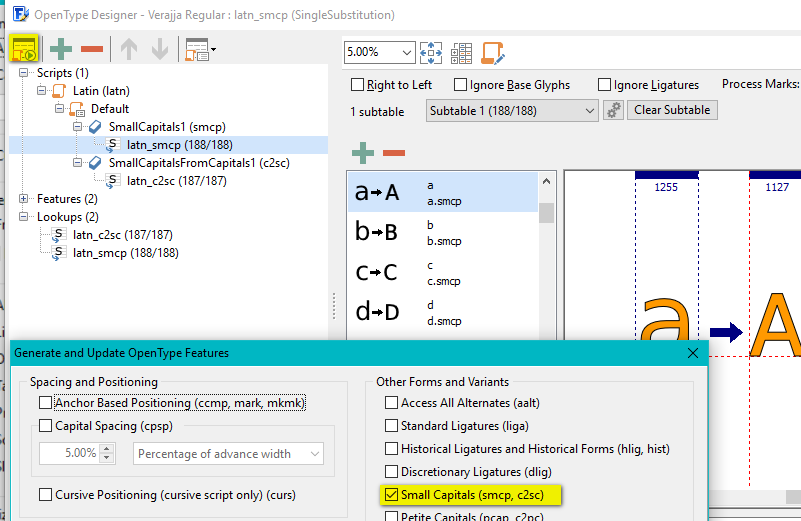