by Bhikkhu Pesala
With my own fonts, instead of trying to fit them into an 8.3 DOS filename, I name them as Garava Regular.ttf, Verajja Bold Italic.ttf, etc. How often have you tried to figure out a font's name from its Truetype filename?

Wouldn't it be good if MainType could automatically rename a whole bunch of Truetype font files with appropriate names?

Would it perhaps be better to use the Postscript name to avoid spaces in the names? Personally I prefer spaces as that makes it easier to read.

by Dick Pape
Renaming fonts from the rather random file names has been a bother to many of the font swapping groups "forever". The answer has been to use specialized utilities to standardize them to the "Full Font Name".

As FC autonames to Full Font Name, the circle is complete.

There are several good programs which do this, the best of the bunch is perhaps FontRenamer by Philip L. Engel. In addition to TTF and OTF, it does Type1 and FON as well as .ai and .eps. It will rename in place, move, copy or list renamed fonts. It runs against directories and/or subdirectories. It handles duplicate file names (1), (2) and checks for invalid font files. It is of "uptodate" design.

What's more it's free.
by Bhikkhu Pesala
It occurred to me that this needs to be language specific, i.e. instead of Regular, Italic, Bold, and Bold Italic, anyone with a Spanish locale setting would presumably want the font names to include Normal, Cursiva, Negrita, and Negrita Cursiva — though the usual convention seems to be not to include "Regular" as part of the regular font name.
by Erwin Denissen
Here is a link to font renamers:
http://www.fontrenamer.com/

by Bhikkhu Pesala
I still use this Font Renamer, which does the job well enough, but it would still be nice to be able to do it from within MainType. 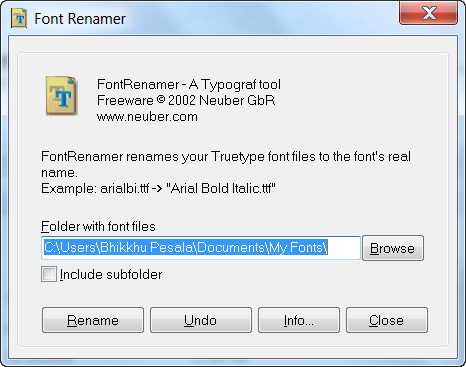 by Erwin Denissen
Do select the fonts and then export them. They will get nice names.

Erwin Denissen wrote:Do select the fonts and then export them. They will get nice names.

Thanks. That works just fine.