by Erwin Denissen
Over the years numerous people talked about Color Fonts, and there have been several experiments with this, but so far no adapted standardization. For example:
Mozilla - Fonts with multi-colored, animated glyphs (through SVG)
Google - fonts with embedded color images
Apple Color Emoji - A font which contains coloured (.png based) Unicode Emoji characters

And today Microsoft announced they will submit an extension to the Open Font Format for colour support in OpenType fonts.

This extension will most likely be supported by Windows 8.1, and will include a new (colored) version of Segoe UI Emoji.

Erwin Denissen wrote: This extension will most likely be supported by Windows 8.1, and will include a new (colored) version of Segoe UI Emoji.


Is there any reason why such a chromatic OpenType font could not work on another platform, such as the Windows xp system that is running on the computer that I am using, provided that there were a suitable application program to use it in?

I have added a note, referencing this thread, to the thread "Galileo Lettering font" in the Gallery forum so as to bring that thread to the top of the list as the thread is about a collection of TrueType fonts that could provide glyph artwork for producing a chromatic OpenType font.

Would it be possible for High-Logic to produce a stand-alone wordprocessor program that could use such a chromatic font?

The ability of High-Logic to react rapidly to new situations could mean that High-Logic could be the first to make available such a product for use on older systems.

by Erwin Denissen
If this extension becomes part of the standard, it will most likely become available on numerous platforms.

by Bhikkhu Pesala
I cannot help but think that this will be an extension to the format that will be very slow to be taken up and supported by applications.

I hope that you won't waste any time on supporting it in FontCreator until it is widely supported by Word-processors, DTP applications, and browsers.

There is much more that deserves priority over this for FontCreator 8 and beyond, such as improvements to kerning and full OpenType feature support.

Embedded bitmap support might be a step needed towards support for colour in fonts, but I would prefer to see a vector format like Mozilla's SVG suggestion implemented in the specification. Coloured Emoticons could just as well be created using SVG or PNG as by supporting them fonts. Coloured text with all kinds of gradient or bitmap fills is already possible in DTP and drawing applications.

by Dick Pape
I don't see any discussion of "create programs". They all seem to be premade (made in the laboratory) for specific applications...

by William
I have started a thread named as follows.

It could be possible, but we'll first have to wait for the specs.

Here is how it will work:

There is a base glyph / fallback glyph in case one doesn't want color enabled fonts.

And one or more glyphs; each with a palette index (color). However the font designer can allow the user to choose a color as well.

Then combine them to make a colorful character:

It seems transparency is also supported, as well as multiple palettes, to address the color background issues for example.

So far this raises more and more questions, so we just have to wait for the specs...

by Erwin Denissen
FontCreator 7.5, released in August 2013, allows you to make your own colour fonts, as it fully supports the new multi-color font extension which Microsoft added in Windows 8.1.

by Erwin Denissen
Things are moving forward, as with the latest release of Mozilla Firefox (version 32.0 available through the official Mozilla release channel since September 2, 2014) the Microsoft color technology is supported! They don't use the Windows API DirectDraw, but implemented color support themselves, so I suspect it is available on several platforms.

Here is how our color font demo page looks like with Firefox: 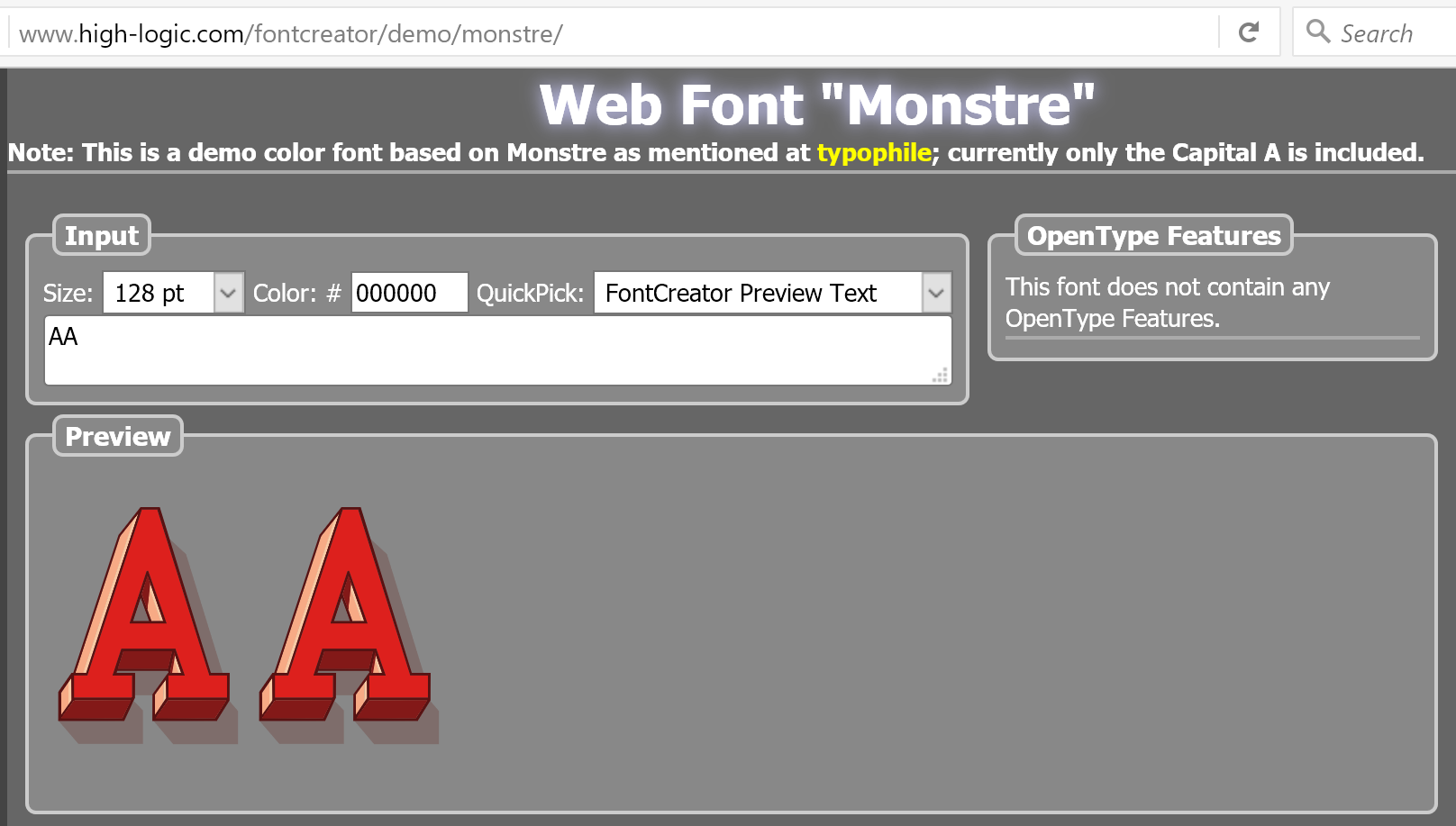 And the amazing SocialFonts Demo 2014: 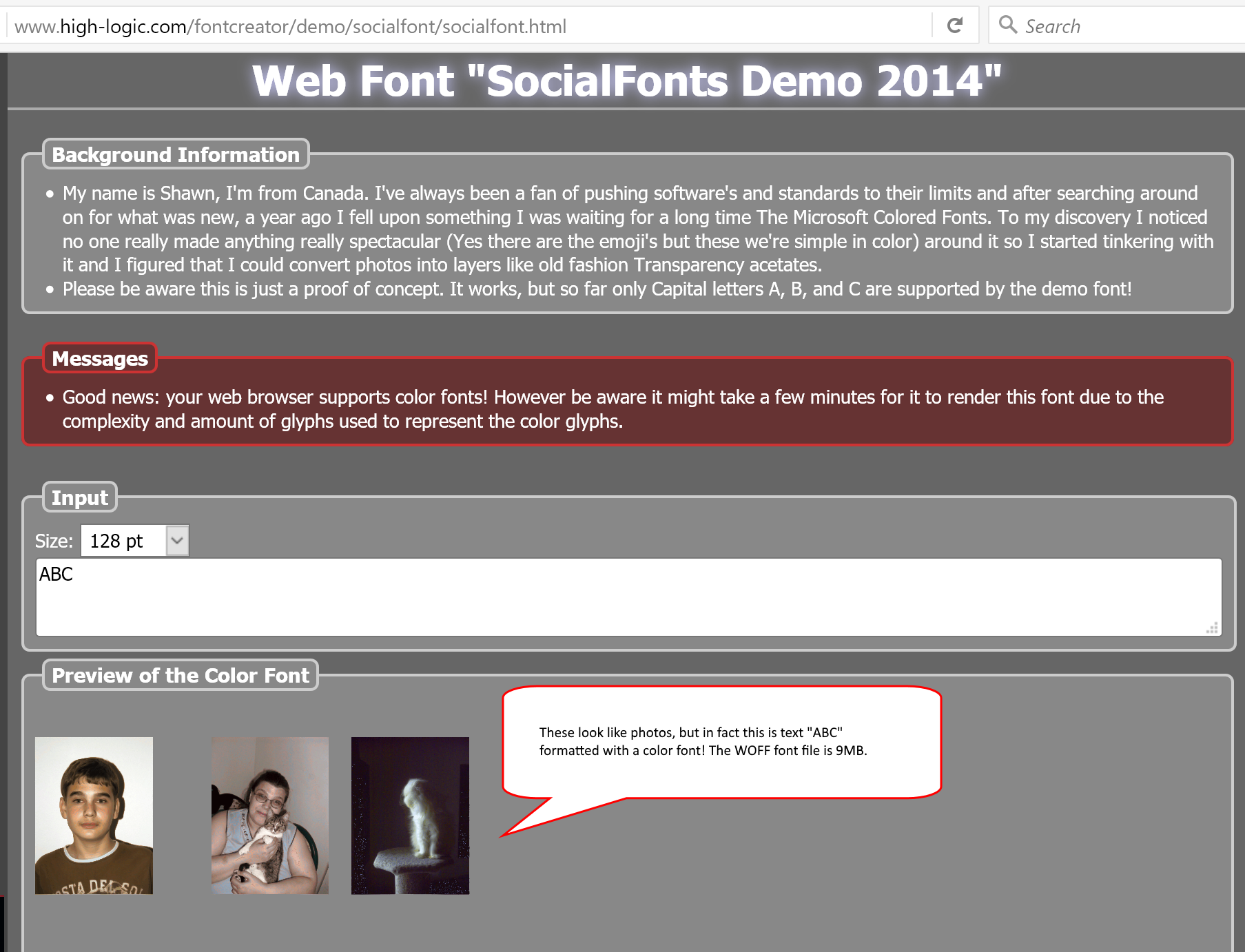 by Bhikkhu Pesala
This is good news. Application support is vital if this is ever going to take off.

by Erwin Denissen
The upcoming update of Windows 10, scheduled for this summer will most likely support OpenType SVG color fonts. This rumor comes from a very respectable person, so it must be true.

Great news, and this might be the best reason for us to start supporting this color format soon.

by Erwin Denissen
While doing some other tests in Word 2016, I was really surprised to see color font support in Word! 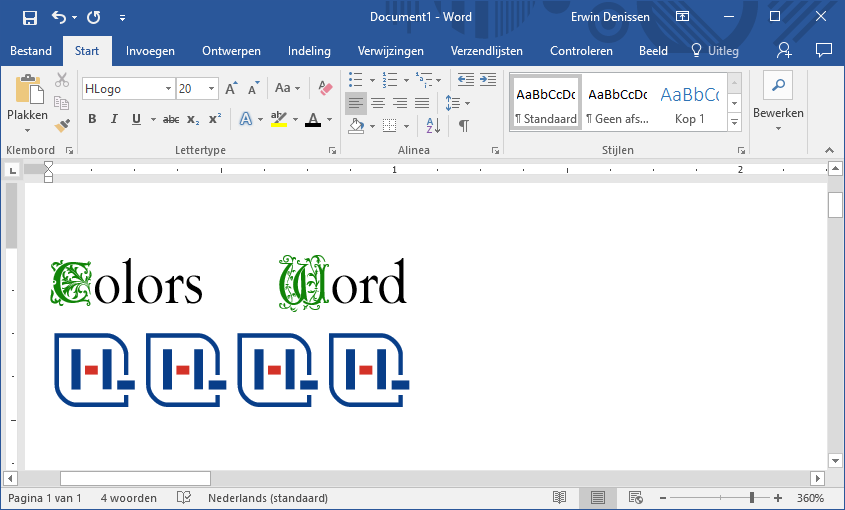 It has some flaws in it (the auto color for text after a color glyph is set to white, so will become invisible; manually setting that back to black fixes it sort of), but this is another step forward for color fonts!

by Bhikkhu Pesala
The Vivaldi Browser already supports Colour Fonts, and that is based on the Blink/Chromium rendering engine, so I guess that Chrome Browser supports it too.

I took a look at Segoe Emojji in FontCreator. Some of the colour glyphs have more members than will fit on the Members palette without scrolling, so maybe that needs a slight resdesign to make it show horizontally, or in more columns?

Erwin Denissen wrote:While doing some other tests in Word 2016, I was really surprised to see color font support in Word!

Also if you export a Word document to PDF, the text will no longer support color fonts, and will also revert to the black and white outlines.