Post your bug reports here. Include information that helps us to understand and reproduce the bug.
Post Reply
3 posts • Page 1 of 1

This seems to happen fairly regularly. I typically edit a set of four type styles at once, and open and close glyph edit windows frequently. I show kerning in the glyph edit window, but that also fails to work although the kern feature is enabled.

Restarting FontCreator resets the OpenType feature selections to none, and that fixes the issue.

Selecting a Script and Language in the Preview Toolbar triggers this bug. Setting the script back to Auto fixes the issue. 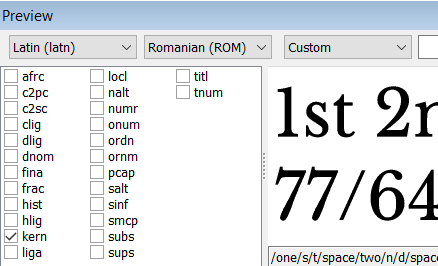 This is indeed a bug; it will be fixed with the next upcoming maintenance release.
Erwin Denissen
High-Logic
Proven Font Technology
Top