Copyright issues in making fonts out of other people's handwriting

Copyright issues in making fonts out of other people's handwriting

I'm a comic artist, and I bought FontCreator several years ago to make a font to letter my work. I'm very happy with the results, and have made a variety of fonts, of different widths and different levels of formality and informality, based on my own hand lettering.

I've also made a variety of fonts based on the work of other letterers. I've done this by scanning samples of their work, cleaning them up in Photoshop, and importing them into FontCreator, and where i can't find a particular character, making it myself based on the kind of lines and curves they use in the characters I do have samples of.

I'm wondering if there are any copyright implications in using such a font commercially. If I were hand lettering and I imitated the letterforms of a letterer I admired, there would be no issue, just as there is no copyright issues in imitating the style of an artist. But in the early days of digital comics lettering, John Byrne got into a bit of trouble for making and using a font based on Dave Gibbons' letterforms, and ended up collaborating with a professional letterer to make a font he could use without stepping on anybody's toes. Gibbons was (and is) still alive and working in comics, and I've been careful only to make fonts out of the work of letterers I know are dead. 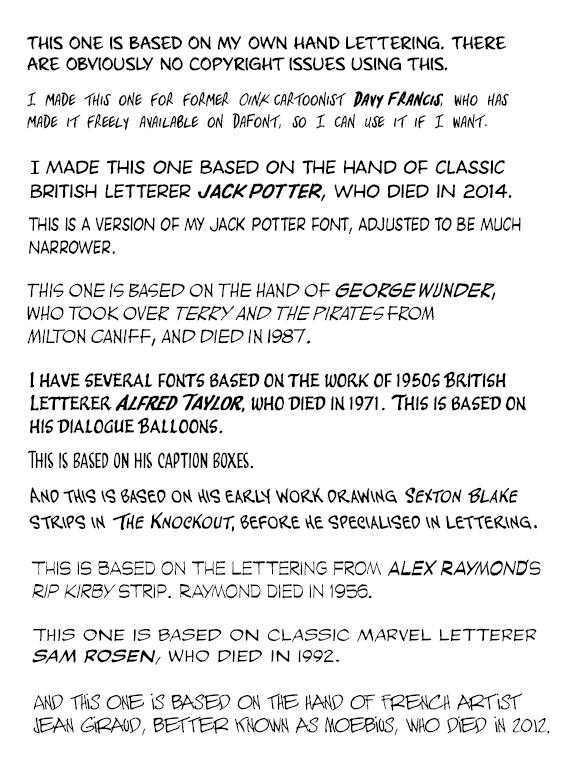 Some of my fonts are more transformative than others. For example, I made a narrower version of my Jack Potter font by adjusting the letterforms in Photoshop and FontCreator, and I actually prefer it to the original.
Top

Re: Copyright issues in making fonts out of other people's handwriting

You should better ask a lawyer if it is legal or not, but if you trace characters it might be considered unethical.
Erwin Denissen
High-Logic
Proven Font Technology
Top
Post Reply
2 posts • Page 1 of 1